How to craft your legal writing on the clock 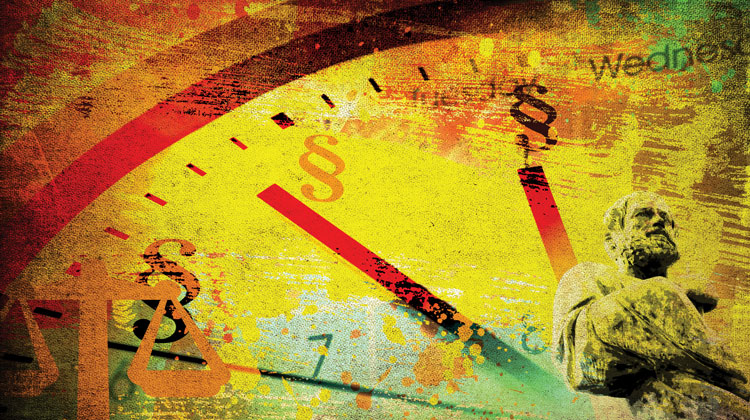 Part two of a three-part series. Read part one and part three.

Recall the situation: It’s the first day of your new job as an assistant attorney general in your state. You’re an experienced litigator, and you put in for the position touting your skill as a writer. You were told that it would be a demanding job, but you figured that your experience in private practice has been as demanding as anything the new position might present.

It’s 9 a.m. You’ve been handed three case files and told that you must file three court papers by the end of the day: a motion for judgment on the pleadings, a motion to strike expert testimony in federal court and a motion to consolidate two proceedings in the state supreme court. No extensions are possible. Like a contestant on the Great British Baking Show, you’re under pressure to whip up something spectacular in short—very short—order.

Because you’re a devotee of good legal writing, you know what you’re looking for. You have a practiced eye. For each filing, you must discover, in short order, the concrete dispositive point or points to be decided by the court, together with the strongest rationales for its decision.

And because you’re an admirer of Aristotle, you know that every argument is reducible to a syllogism. There will be a major premise (a legal rule) and a minor premise (a crucial fact that plays into the legal rule). From the interrelationship of those premises, the conclusion should be clear. Meanwhile, though, you might uncover a counterargument that needs demolishing.

The major premise for your arguments will derive from one of three sources: a legislative text or court rule, a judicial precedent or a commonsense policy of some kind. You’ll be trying to discover a major premise for each argument and fit it in nicely with a minor premise. If you can’t discover those things, you’re sunk. But fortunately, your experience guides you to identify precisely what kinds of things you’re looking for.

The motion for judgment on the pleadings

The first case involves the renovation of 10 rooms in a state office building. A subcontractor (Olson) not paid by the general contractor has placed a lien on his work and filed claims against both the contractor and the state.

You’ve made this look easy. In fact, there’s a lot of other noise emanating from the files, but that’s all extraneous and irrelevant to your core points.

And you’re ahead of schedule: It’s only 9:50 a.m.! Time to look at the expert-witness issue.

The motion to strike

Your boss has told you that the expert-witness issue arises in a lawsuit against the operator of an unlicensed waste-disposal facility. The defendant has removed the case to federal court. The issue before you isn’t based on Daubert, but instead on 28 U.S.C. § 1746. You’ve never worked with this statute before, but you quickly ascertain that it allows an unsworn declaration to be submitted in support of a motion for summary judgment only if the declarant signs it as “true under penalty of perjury.” The expert here, Dr. Budd, has signed his declaration but not as “true under penalty of perjury.”

Here your point heading is quite simple: “Because Dr. Budd’s unsworn declaration does not comply with § 1746, this court should strike it from the record.” With some computer searches, you quickly find two federal appellate opinions within your circuit applying the statute as written. Your major premise is well-supported, and your minor premise is undeniable. You’re in good shape.

But wait. Should you number the point heading “I” if you can’t think of a “II”? You seem to remember that the U.S. solicitor general’s office has unnumbered “umbrella” headings if there’s just one overarching point. Sixty seconds on their website confirms your memory.

This motion presents the court with the following issue:

Then follows your unnumbered point heading, which effectively answers the question.

The motion to consolidate

For this third motion, you’re looking for similarities between two proceedings. You want to persuade the appellate court to join two appellate matters into one proceeding. Although the cases seem to be languishing on the court’s docket, they’re fascinating. The facts are outlandish, and the state’s briefing has been stunningly good. You know this much by noon.

In your judgment, you needn’t rehash the record. Perhaps the best approach is simply to write so evocatively as to pique the judges’ interest in the matters. By 12:45 p.m., you decide to write a one-paragraph motion. It goes like this:

Now pending in this court are two cases involving the identical parties and the identical subject matter: cases 21-1441 and 21-1456. One is a mandamus petition, the other a direct appeal. Even a perfunctory look at the briefs demonstrates striking likenesses: the same unfortunate ward, the same guardian ad litem, the same contemnors, the same siblings who confiscated the same corpus of wealth. The dispositive rationales in the two cases should be the same. Judicial efficiency would be served by consolidating the two proceedings and dispatching them together. Respectfully submitted, [your name].

You hand it over to the legal assistant for inserting the caption, the certificate of service and the footer. You ask him to prepare a form of order to accompany the motion.

The rest of the day.

It’s now 12:50, you’re more than an hour and 15 minutes ahead of schedule. (Good thing you brought a sandwich to work.) You’re having fun playing with words and ideas, and your practical turn of mind is definitely paying off.

You still have work to do, and there may be some further difficulties you’ll uncover. But you’re well on your way, and your filings should be sound. (Although you expect them to be first-rate, you’d be more inclined to describe them as adequate.) Like a short-order chef who’s been given ingredients and had orders placed, you’re ready to whip up some high-quality fare in relatively little time.

Your boss well understood that not every motion can be done in a day. But these three could. Your boss believed in you. And you believed in yourself, but only because for most of your adult life, you’ve been preparing yourself for days like these.

In part three, we’ll see how the motion to strike and the motion for judgment on the pleadings turn out.

This story was originally published in the June/July 2021 issue of the ABA Journal under the headline: “Legal Writing on the Clock.”

Print and initial online versions of "Legal Writing on the Clock," June-July, page 30, should have said that in part three of the series, readers would see how the motion to strike and the motion for judgment on the pleadings turned out.

Bryan A. Garner, president of Dallas-based LawProse Inc., has taught writing seminars over the years to more than half the offices of attorney general throughout the United States. He has also taught at the U.S. Department of Justice and the U.S. solicitor general’s office. Among his more than 25 books is The Winning Brief: 100 Tips for Persuasive Briefing in Trial and Appellate Courts.