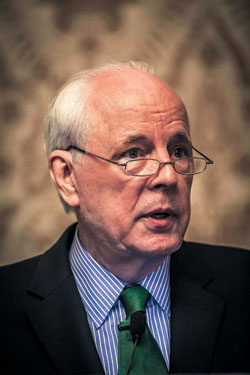 The former White House counsel said there was a culture within the White House of not caring what the law said. Photo of John Dean by Bob Stefko.

That was the question former White House counsel John Dean wrestled with during his 1973 testimony before the U.S. Senate committee as he blew the whistle on President Richard Nixon and his administration for crimes relating to the Watergate break-in. It’s a question he continues to wrestle with today, as he said during the plenary session at the ABA Techshow in March.

During his speech, Dean reminisced and even joked about his career working for Nixon—a tenure that began in 1970 at the age of 31 and ended when he was dismissed in 1973.

Dean is writing another book about Watergate, and he said he has listened to thousands of hours of Nixon’s tapes, including hundreds he suggested no one else had listened to or cataloged. He claimed to know more about Watergate today than when he was living it.

In many ways, Watergate was a lawyers’ scandal. By Dean’s count, 21 lawyers (including himself) were ensnared by it. Nixon himself had once been a practicing attorney.

Dean said lawyers implicated in Watergate were either ignorant of the law or brazenly ignored it. Because of this, he said, the ABA made the decision to modify its Model Code of Professional Responsibility (which had been in effect since 1969) so students would be required to take legal ethics in law school, would have to pass an ethics examination before they could practice law, and would have to take mandatory ethics CLEs to keep their licenses.

“There were two dozen post-Watergate reforms involving things like campaign finance, special prosecutions and whatnot,” said Dean. “Those are all gone now. But the professional bar has insisted that ethics requirements remain at the forefront of the profession. It’s refreshing to see that.”

Dean, who framed the Watergate burglary as a tech crime, noted the administration had planned other such “hackings.” Among the examples he cited were the Huston Plan, a 1970 proposal that would have authorized surreptitious break-ins and eavesdropping to gain information about left-wing radicals and anti-war demonstrators, as well as a false-flag operation that would have involved firebombing the Brookings Institution so White House operatives disguised as firefighters could steal sensitive files. Dean said he helped put the kibosh on both plans; so as a result, he was out of the loop when Watergate occurred. 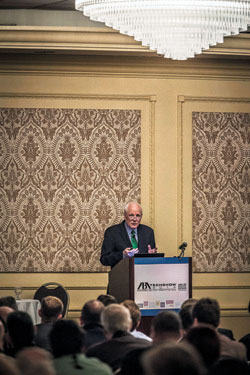 “Technology changes,” Dean said, “but I have not noticed significant changes in human nature.” Photo of John Dean by Bob Stefko.

Dean’s talk included several light moments and plenty of justification for his actions. He noted that he took his punishment for his actions and even had warm memories of Nixon, despite what happened.

“I thought we had to be accountable, and that was somewhat naive of me,” Dean admitted. “Ultimately, I thought everyone would do the right thing. But they decided the right thing was to make me the scapegoat. Without the taping system in place, I’m not sure history would have turned out the way it did.”

Not all bygones are bygones for Dean. In an aside he noted that one of the best-known of the plumbers, G. Gordon Liddy, may portray himself as someone like a character in a James Bond novel, “but this guy isn’t even close to Maxwell Smart.”

He also warned that when it comes to national security, the parameters of presidential power remain murky, and pointed to recent NSA surveillance revelations as proof that the lessons of Watergate continue to be unlearned.

This article originally appeared in the June 2014 issue of the ABA Journal with this headline: “Watergate’s Whistleblower: Legal ethics may be the only surviving reform, John Dean tells Techshow audience.”