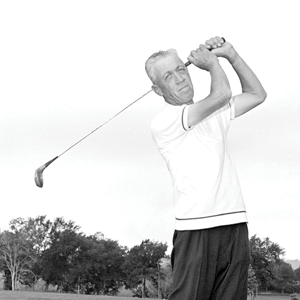 He later became internationally famous as a golf teacher—and as the author of Harvey Penick’s Little Red Book: Lessons and Teachings from a Lifetime in Golf. I remember him fondly, especially for his gentle suggestions to try this or try that.

I often use Penick’s approach in my teaching of legal writing. To litigators who draft pleadings, I’ll say: “Why don’t you try saying coolly and calmly on the first page why you should win?” Then I’ll add: “Please omit any implication that your adversary is a dunderhead or a wretch. Just use the logic of your argument.”

Let’s say, for example, that Ralph has written an appellate brief that contains a section that begins this way, with a lot of carping ad hominem attacks:

Mendez Corp. (“Mendez”) makes meritless waiver claims. It purports to claim, for example, that Pinker Systems (“Pinker”) did not disclose the rulings of the court that they lost on. However, Mendez blithely ignores the filings that deal with the appeal on the merits, where Pinker complained about mistakes below. Paraphrasing Mark Twain, Mendez’s reports of Pinker’s alleged waiver have been greatly exaggerated. For example, Mendez erroneously complains that appellants did not challenge the Statement of Decision. Mendez’s claim is so wrong on so many levels, as demonstrated below.

This is an incompetent argument—although I wouldn’t say that directly to Ralph. In the same way, if Penick saw a horrible golf swing, he wouldn’t denigrate it. He’d try to help in a considerate yet persuasive way.

Ralph’s opener has serious problems. To begin with, it’s incomprehensible, talking about things that assume prior knowledge. It puts off discussion of the core points of the argument (“as demonstrated below”). It has all sorts of unearned characterizations of the opposing side (“meritless,” “blithely ignores,” “erroneously complains” and “wrong on so many levels”). It assumes that the reader already agrees with the writer—almost always a fatal assumption. The Twain allusion, about which Ralph was doubtless proud, utterly fails.

In coaching Ralph, I encourage him to explain in the opening paragraph why his client should prevail. At first, this flusters him because he insists that he has already done so. I ask him to read the paragraph through the eyes of a neutral party. He begins to see that it doesn’t make much sense to a stranger, but he rationalizes this potential weakness on grounds that the judge will be familiar enough with the facts after he or she reads a bit more to realize that Ralph is right. I tell him he has 15 minutes to write an opener that calmly explains why he wins without disparaging the opponent in any way.

When I check back, Ralph has composed both himself and a good substitute opener:

Pinker has done everything necessary to preserve error in this appeal. Although Mendez asserts that Pinker has waived this appeal by not objecting to the proposed statement of decision and not moving for a new trial, the record belies these assertions. Pinker repeatedly objected to the statement (pages 848, 851 and 853 of the trial transcript), moved for a new trial (page 857), and even moved for a new and different judgment (page 904). The truth is easily verifiable in the record that Pinker has filed with the court.

This concrete paragraph is far more damaging to Ralph’s adversary than the earlier version is. It successfully impeaches the other side, and it does so confidently.

Ralph’s colleague Sarah has a different problem. In her motion for partial summary judgment, she’s peppering her opener—the most valuable turf in a brief—with meaningless verbiage. Here’s how she starts:

I ask her why she begins this way. She replies: “That’s the way I begin all my court papers. Everyone does it.”

“Do you think it’s effective?”

“It must be. That’s why people do it. You’ve got to show that ‘Whitney’ is short for all the defendants and explain what the court paper is about.”

“Doesn’t the title already do that? Why don’t you try instead explaining in your opening paragraph why you’re entitled to summary judgment on some of the claims?”

“I’m not sure. There are so many different claims.”

Long pause. “I guess there are three. But how could I do that?”

“Figure out what the elements are for each of those claims and then point out the elements, for each claim, on which the plaintiff falls short.”

“That sounds impossible to do in one paragraph.”

“Please use that, but don’t disparage Bergdorf in any way. Just say coolly why you win.”

Sarah is really frustrated. She wants to throw up her hands. So I tell her we’ll write the paragraph together. I ask her to list the elements for each claim—tortious interference with a contract, conversion and breach of fiduciary duty.

In 15 minutes, she has her list, and we start writing. We give the motion a new and shorter title: “The Whitney Defendants’ Renewed Motion for Partial Summary Judgment on Tortious Interference, Conversion and Breach of Fiduciary Duty.” Not beautiful but businesslike. We don’t repeat it in the opening, which goes like this:

Bergdorf has no defense for refusing to pay Whitney for its services. (“Whitney” here refers to all three defendants, whose interests are aligned.) Each of the three claims addressed in this motion falls short of the required elements. With the tortious-interference claim, Bergdorf cannot marshal any evidence on three of the four elements. With the breach-of-fiduciary-duty claim, Bergdorf cannot show that he and Whitney had any kind of fiduciary relationship. And the conversion claim fails for two reasons: (1) There is no evidence that Bergdorf had any proprietary interest in tangible or intangible property. (2) There is no evidence that any allegedly proprietary information was merged into a document that was converted by Whitney.

Sarah asks, “Why is the tortious-interference point written so abstractly, without listing the elements?”

“Only because it would bog down the opening paragraph. You want to keep things moving. Besides, the judge will now be curious to see all four elements and to scrutinize the three that you’re saying haven’t been met.”

“But we can’t do that all the way through the opener. You’ll need concreteness to be credible. We can be more concrete on the second and third claims while keeping the prose moving at a clip.”

“Try it every time you write a court paper. Try winning on page 1. The middle then becomes your proof—almost like a geometric proof. And you’re far more believable when you don’t vilify your opponent.”

It only recently occurred to me how much Penick’s methods had influenced me in my teaching. My last lesson with him was 40 years ago, about the time I was deciding not to pursue a career in golf.

His books with Bud Shrake brim with wisdom, and they’re a gift to the world. They’re said to be the best-selling sports books ever published. His second book, And If You Play Golf, You’re My Friend, was published in 1993. Three of his lessons in this book bear on Ralph’s and Sarah’s writing, and probably yours:

“Practically all of the awkwardness and odd ways people have are an outgrowth of misunderstanding some of the few simple fundamentals.”

“Be brave if you lose and meek if you win.”

And Penick said something else, too: “I never know so much that I can’t learn more.”

This article originally appeared in the February 2017 issue of the ABA Journal with this headline: "Take a Swing: How lawyers can improve their litigation scores by heeding lessons from legendary golf instructor Harvey Penick."

Previous:
Activists team up with ABA to provide law school scholarships for women in Congo

Next:
Court to decide whether Constitution grants protections to Mexican boy killed by US border guard