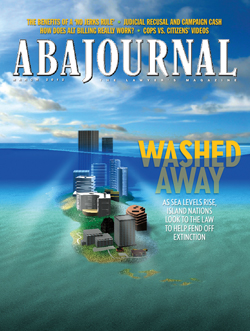 “Washed Away,” March, was a fascinating, albeit tragic, article. If one analyzes the issue under traditional common-law principles, the actions of the developed nations constitute a form of trespass. And I have no doubt that we could create methods for apportioning liability that would satisfy any reasonable evidentiary standards. The difficulty here is not in devising a legal response, but in developing the political will to acknowledge responsibility for what is happening.

As a practitioner who has worked on climate legal issues in academia and the nonprofit sector (and chair-elect of the ABA Section of Environment, Energy and Resources), I thought “Washed Away” was an excellent cover story. However, it failed to mention the unique program offered at Pace Law School. Through the practicum course in the United Nations and environmental diplomacy, students earn academic credit working on climate issues two to three days a week at the U.N. in the missions of small island states.

Several graduates—such as Caleb Christopher, quoted in the article—have made a permanent home in this important field of practice as a result of the practicum. It is important that the ABA Journal connect its stories to law students and the future members of our profession whenever possible.

Being an old guy, I find the current trauma over flat fee vs. hourly billing amusing and strangely sad (“Facing the Alternative,” March).

There was a time when lawyers were “counselors at law” and their clients were partners in problem-solving, when the fee was measured by the client’s assessment of value for the services rendered. Why shouldn’t the client’s expectations be the determinant of value?

The law firm’s need for revenue should never have become the overshadowing factor in the value proposition. Admit it, you’ve heard partners tell a young associate, “It’s not time to settle; you haven’t worked the file enough.” Worse, have you had a partner bill 26 hours in a day while on vacation? Is there any reason the client revolution has assumed such force?

We can reverse these trends by learning the profitability that comes from efficiency: predictable pricing with ever increasing quality. Our corporate clients have been living in this global economy for decades. It’s time we join them and assume the risk of our own inefficiencies. If we don’t, there are many firms and lawyers willing to take the work we claim can’t be done without uncertainty, inefficiency and waste. Legal project management is something we’ll all grow more comfortable with over time. Otherwise, we will be standing on the sidelines watching more innovative lawyers doing the high-level work we wish we could still be doing.

I too am a proponent of fixed fees. it’s certainly true that you won’t make a profit in every case, but you certainly have the incentive to work more efficiently than otherwise.

I do flat-fee uncontested divorces for $1,500, which includes all costs. Most of the time I come out ahead $500. If I do 10 of those a month, that’s a super-easy $5,000 profit, which would otherwise require close to 20 hours worth of work. I’ve also started offering flat fees for specific court appearances, such as an emergency custody hearing or motion to divest jurisdiction. Clients are glad to pay up front.

With standard retainer agreements, I have to send out the bill and fight to get paid or get the trust replenished. That’s a headache, and it costs me time and money. While I don’t flat-fee everything, I’m slowly working toward offering them more and more.

Like democracy, hourly billing is the worst system until you’ve tried them all. Some, but not much, legal work lends itself to flat fees; that work has some form of volume and repetition, like consumer bankruptcy or specific litigation defense. Volume has to be evaluated either from one firm’s experience (as in the article, after 500 similar cases) or by market experience.

Some flat fees are established, perhaps unintentionally, by regulation: the cap on no-look Chapter 13 cases mysteriously equals the flat fees charged by the lawyers.

But for most legal work, every matter is different; more important, routine cases can turn unroutine very quickly. When they do, the flat fee fails and usually creates an ethical problem.

Anyone, client or lawyer, going into a flat-fee arrangement needs to have an escape hatch for the case that goes sideways. Other wise, unless that lawyer has built a “bad case reserve” into his pricing, he’s going to dump that case.

Institutional clients try to set flat fees based on this question: What’s the cheapest price you can do X for? The answer reflects the work for a routine matter with no wrinkles. The lawyer, however, sets the fee based on the cost of the typical case that ends up having problems. Neither approach reflects the value or cost of the work as well as actual time spent.

Flat fees definitely work for the small guy. Heck, I did all the divorce paperwork yesterday for an uncontested in about 30 minutes. I spent 30 minutes in an interview to get all the information, may spend another two hours in associated travel, but will be in the judge’s chambers for his signature for maybe five minutes. I combine my cases for trips to the courthouse, of course. For not a lot of effort, $600 isn’t bad.

I charge $1,000 for a Chapter 7 bankruptcy; those do take two hours of travel for the trustee meeting and an hour or so with the client initially, and maybe four hours for all the paperwork. Divorce is the better option, as the paperwork is just editing a pre-existing document to personalize it. But both produce good income. I just need more of them to survive better.

I think awareness of the issues raised in “Good Cop, Bad Citizen?” March, is rapidly growing in the law enforcement community. It’s a large field and few people are going to post videos favorable to law enforcement, so the analysis of law enforcement by YouTube will always have a bias. But cops are learning.

You would think that officers would be used to being on camera, but unfortunately many agencies haven’t put money into in-car videos. I think our jobs would be a lot easier if we had more video out there. I’m hoping tools like the Taser Axon [video from the officer’s view] will become nearly universal. I wish I had it when I was in uniform.

I think the reason cops initially had a problem is that people recording them generally are trying to provoke a reaction. When officers are trained to be in control of a scene and someone is getting in their personal space, officers are going to tend to react.

Agencies just need to prepare officers to take the right action. People with cameras need to be redirected to locations far enough away so the officer can deal with the situation without having someone over his shoulder.