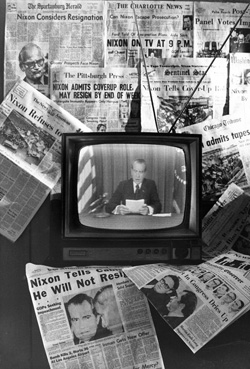 Regarding “The Lawyers of Watergate,” June: If you asked 1,000 people in the street who John Dean was, I bet you more would say a maker of breakfast sausages than would tie the name to Watergate, and less than half of those would know he was ever a lawyer.

He doesn’t need redemption. He just needs to move on.

Mr. Dean spoke at my law school circa 1979 and made an indelible impression. To paraphrase, he said that he (and others) didn’t wake up one day and say, “Let’s go break the law.”

He said every day, every decision was one step closer to “the line.” Each step was small, but one day he turned around and realized he had long ago crossed the line and didn’t even know it.

I’ve incorporated what Dean said into ethics discussions I’ve led by saying, “There are no points awarded for how close you can get to the cliff before you fall over. If you see the cliff, move away from it—not closer to it.”

Of them all, however, I’m most moved by what Chuck Colson did in dedicating the rest of his life to Christian prison ministry. God bless those who’ve let us learn from their sad experiences.

I began law school in August 1974, shortly after Nixon resigned. I was stunned when none of our professors raised the subject or initiated a discussion of the legal, constitutional or ethical implications of the Watergate scandal because I had been transfixed by the whole mess. It was a rude awakening.

But to show you that not much changes and the lessons of Watergate have not been learned by succeeding generations of lawyers, you need only refer to Illinois politics and the convictions of its last two governors and their cronies. It is the responsibility and obligation of the bar to remind the citizens of our democracy that the price of liberty is eternal vigilance.

ARGUMENTS FOR BEING ARMED

While “Pistol-Packin’ Practitioners,” June, surely was meant to be a good-natured ribbing of lawyers who exercise their constitutionally protected right to keep and bear arms, the article’s knowing sanctimoniousness contributes to the widespread misunderstanding of a fundamental right that the American Bar Association is supposed to safeguard rather than trivialize. I don’t recall such belittling treatments of free speech or free exercise.

The eight people murdered in 1993 at a San Francisco law firm might well have been saved had there been a pistol-packin’ practitioner around.

While no one was injured in the three disconnected incidents the article chose to highlight, I don’t recall seeing any chronicle of the number of people injured from lawyers drinkin’ and drivin’, which surely has a large tally of dead and maimed to account for.

Lawyers have Second Amendment rights too. And lawyers, “perhaps more than most other professionals,” should appreciate and respect that fact.

For every example you give, I’m sure one could find as many where a gun-owning lawyer was able to use a firearm to protect himself or herself and their family.

In fact, the former president of the National Rifle Association, Sandy Froman, a Harvard Law grad, became a gun owner when she realized she was unable to defend herself when someone tried to break into her residence. I’m the general counsel for the firearm industry’s trade association, the National Shooting Sports Foundation, and a proud, safe and responsible gun owner.

TEAMING UP VIA TECHNOLOGY

Regarding Rachel M. Zahorsky’s Law Scribbler column about the cyber-program that has law students and mentors from across the globe teaming up to develop new approaches to the legal profession, June: I really like this idea.

I have been struggling to bring my traditional attorney-style husband into the new tech-driven world for almost 10 years. It has been a real struggle and, in some cases, almost marriage-ending struggles.

This article validates those of us who know that there are out-of-the-box ideas, and that you have to look at new and expeditious ways to work and meet the needs of not only your clients, but potential clients and the communities we work in, live in and support.

New solutions must look past representation of only the Fortune 100 /1,000/whatever. Smaller clients want predictable budgets, flexible tactics and responsive advice (even beyond firm profit considerations). In our market niche, it took many years to develop an out-of-the-box “idealistic” culture, HR, software and forms of limited representation to make it work for us. Most clients loved it from day one.