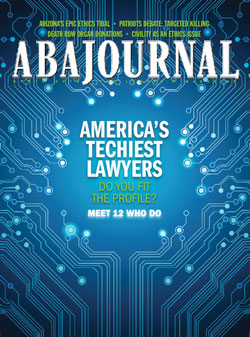 Regarding “Tracking Techies,” April: Back in the 1950s I was a techie studying to become a lawyer. I told a couple of companies of my work on the IBM 650 and 701, but they did not seem interested.

I did arbitrate a dispute about computer services in 1972. I programmed the IBM 360 and taught Basic to children. I have dabbled in artificial intelligence and the law over the years. I never did blend my two careers as I had hoped in 1958. But best of luck to those who have.

Surely the thousands of attorneys who are registered to practice before the U.S. Patent and Trademark Office, each of whom has a technical degree and/or background, would be considered to be techies. It is amazing that none are mentioned in the article.

In what universe is the typesetting of Terry Carter’s otherwise excellent article “The Prosecutor on Trial,” April, page 42, considered appropriate?

In particular, I refer to the left-hand column on each page. The decision to right-justify the text leaves gaping spaces (see page 47, for example) and an utter inability to be sure where paragraphs start and stop (see page 49, for example). If the sentences “About the same time …” and “Thomas’ case was …” on page 48 start new paragraphs, why are they indented so differently?

Stunts like this aren’t catchy—they merely interfere with the substance. Even a bad PTA flier is easier on the eyes than this article.

That this could happen in America today is downright frightening. OK, perhaps I’m being somewhat naive, but for it to be so public and so pervasive. People, people, people, we have to get it together and let our voices be heard now! It is inexcusable that this has grown to the proportions that it has.

Joe Arpaio has had a stranglehold on the “justice” system in Arizona for years. It’s played out on the television for all to see, yet they vote him back in again, year after year.

I grew up in Tucson, back in the day when you were proud to mention names like Udall and Goldwater—oh, how I long for those days! Today, I’m reticent to mention my home state, simply for fear that people will assume I’m some sort of ignorant racist, right out of the gate.

Arizona, I weep for you.

Regarding Rachel M. Zahorsky’s Law Scribbler column about law deans and professors discussing the law school loan crisis (April): In May 1994 while in Omaha, Neb., I read in the local newspaper that the president of Creighton University said the law school incoming class would be smaller than planned. The reason was that the tight job market gave this religious school an ethical dilemma: The president felt it immoral to admit more students than were likely to find jobs upon graduation.

Have any other school leaders ever made a similar decision? Doubt it. [Editor’s note: See “Law Grads’ Toil and Trouble,” Letters, March, page 5.] While I was a Georgetown Law student in the early 1970s, a faculty study concluded that law students subsidized main campus operations; the law school operated at a “profit.” Law tuition helped fund the medical and dental schools. Just another reason for lawyers to hate doctors!

Universities around the country made a common discovery around 30 years ago—law schools are profitable, or can be so. In comparison with programs that require specialized lab equipment, law schools need classroom space and libraries. Even with the cost of qualified instructors in relation to the market in private firms, schools can make money with law schools. So they grew.

As salaries in firms skyrocketed in the 1980s in private firms, pay in the schools was raised to stay competitive, and the increases in tuition took off. When universities stop viewing law schools as a means to subsidize other programs, such as in the humanities, we’ll see the tuition inflation slow down. I’m not optimistic for current or future law students because I see no change of heart within the academic community about simply raising prices when there is no outside discipline.

Your excellent ethics article “Be Nice,” April, caused me to think back 32 years to one possible beginning of the lawsuit civility movement.

Here in the Southern District of Alabama in 1980, when I was the only magistrate and was handling all the discovery motions, I worked with a committee of trial lawyers and we drafted and the court adopted a first-ever-anywhere official court discovery guidebook called Introduction to Discovery Practice in the Southern District of Alabama. The first plain-English lines of it, entitled “Courtesy,” said: “It may be appropriate to note first that discovery in this district is normally practiced with a spirit of ordinary civil courtesy and honesty. Local lawyers and the court are justifiably proud of the normally courteous practice which has been traditional at the Mobile bar. Courtesy often suggests that a telephone call may be appropriate before, for example, filing a notice of deposition or motion to compel answers.”

The next year when the American Bar Association held a National Institute on Discovery Abuse in Austin, Texas, committee chairman and Mobile lawyer Louis Braswell and I were invited to explain our booklet approach as one potential salve for discovery problems. The lawyers and judges who were there liked the idea of the booklet, but were most struck by its opening on courtesy. Paul Bschorr of New York City was chairman that year of the ABA Section of Litigation, and when he went home he worked with the Eastern District of New York to adopt a similar booklet.

After that the movement spread over the country, and people in farflung places contacted us in connection with the effort, but almost always what struck them most was the call to keep simple courtesy in lawsuits.

David A. Bagwell
Fairhope, Ala. 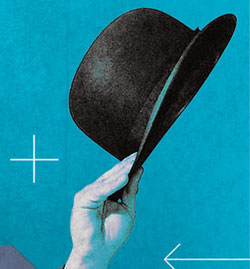 I present continuing legal education seminars on ethics and professionalism. We have one on this very topic: How not to let our own commitment to ethical behavior be jeopardized when we are confronted with unprofessional, disruptive or bullying behavior.

One attendee described a motion hearing so rancorous that the judge ordered the two opposing counsel to flip a coin to decide the disputed issue—whereupon fisticuffs nearly broke out over who got to “call it.” Attendees don’t just talk about other people’s behavior, either. These folks easily grasp how the stresses of a particular case, or of a lean time in practice, could combine with “having their buttons pushed” by an uncivil opponent to render them vulnerable to doing something stupid, uncivil—or even unethical—themselves.

Thus, I am thankful that the state and local bars are taking the issue of incivility seriously. If we do not police our own, the only time anyone else will do so is once the behaviors have gotten so out of hand that they warrant criminal prosecution or civil actions for damages.

But the problem runs deeper than the ethical codes can reach. The reason that folks can relate to the pitfalls of “mutual escalating incivility” is because all of my audiences have this in common: They are not merely lawyers, but human beings. While this fact means many truly great things, it also means that we’re all vulnerable—to stress, outside pressures, internal drives to pursue justice (not to mention income), reputational concerns, and our own individual sets of foibles and peccadilloes.

Before we can even begin as attorneys to police one another, we must first be committed to policing ourselves. That often will mean letting other people help identify the places where we, too, might be adding our own fuel to the fires of incivility. The same self-awareness and humility that can help us maintain our own ethical moorings, whatever tempests of incivility we may encounter, will also be incredibly helpful when we have opportunities to help our struggling colleagues at the bench and bar to navigate these deep waters, as well.

CHECK OUT THIS BIRMINGHAM SITE

Regarding “Legal Road Trip: Birmingham,” April: Given the civil rights and historical significance of the city and the site itself, I was surprised that you did not include the famous Rickwood Field ballpark, where Satchel Paige, Willie Mays, Charley Pride (yes, that Charley Pride), Reggie Jackson, Hank Aaron, Vida Blue, the Birmingham Black Barons, as well as Babe Ruth, Ty Cobb, Dizzy Dean and Rollie Fingers played.

It is considered the oldest baseball park in the United States. Whether your primary interest is the civil rights movement, sports or just plain American history, it is a site worth visiting.