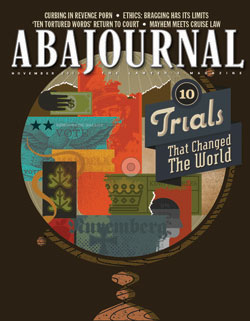 Regarding “Courting Destiny,” November: Loved the article. However, perhaps more important than the trial of Socrates or the Adam and Eve story was Aeschylus’ trilogy, The Oresteia (or, more specifically, the third play, The Eumenides), in which Orestes was tried (by a jury of 12, including the goddess Athena) for murdering his mother, Clytemnestra, in response to her complicity in murdering Orestes’ father, Agamemnon.

It is the earliest example I can think of in which we see an inkling of a system of justice akin to what we now possess, resolving the most basic human conflict based on jealousy, revenge, murder and justification. It portrays the still-present conflict between resolving human conflict through revenge or through a legal system. It provided the philosophical basis for Athens to establish a legal system to administer justice in place of private retribution. It also established the foundation for a presumption of innocence, inasmuch as a tie vote of the jury resulted in an acquittal.

Shouldn’t that at least put it in the top 10?

I suppose there is never going to be a perfect top 10 list, but I was looking—in vain—for the trial of William Penn. It established the power of the members of a jury to find as their conscience dictated, even when threatened with jail (not pretty back then) by the judge. John K. Addy
Billings, Mont.

Why does every feature of this type need to be infected with political correctness? Susan Anthony’s actions were heroic and far-reaching. Anthony’s trial is obscure and irrelevant and changed nothing. The “who is white” case likewise seems to have been included to demonstrate that Arabs have been subject to discrimination for a long time. So have many other groups.

Most people consider the Nuremberg trials to have been a reasonable exercise in how the victors should deal with war criminals, and only the most vicious anti-Semite would deny that the Eichmann case was a proper exercise of extraterritorial jurisdiction. But judging from how many leading Nazis escaped and were never brought to justice, Winston Churchill was probably right that the leaders should have been lined up and shot, and it has become clear that many sympathizers in various quarters are guilty of having sheltered Nazis who escaped.

Slobodan Milosevic’s trial adds no more than an illustration that the system sometimes still can work, but unfortunately the Hague court has become too politicized, and the concept of “universal jurisdiction” has become a discredited embarrassment because of the way that certain groups constantly attempt to invoke it to harass and threaten Israel and Israelis.

I was also disappointed by George Anastaplo’s approach. Suffice it to say that he either ignored or was unaware of the Midrashic sources. These sources may not be familiar or relevant to those not steeped in the Jewish tradition, but they do provide answers to some of the questions and issues that Anastaplo raises, including what the Serpent did or did not know, what the Serpent was hoping to achieve and how Eve’s overstatement of the prohibition got her and Adam in trouble.

While I am not going to suggest alternatives generally, what about the John Peter Zenger trial (freedom of the press) and John Adams’ defense of the soldiers in the Boston Massacre (even the very unpopular defendant is entitled to representation)?

The trial of Socrates, the trial of Jesus and the the trial of Martin Luther should all be on this list if we are talking about “world changers.” Clarence Darrow was a great lawyer, but is not on the same level as the other three.

I’m a little surprised no one mentioned the Alfred Dreyfus trial. How many trials started a sequence of events that resulted in the founding of a country?

I wrote a paper in high school that judged Eve the guilty party and Adam innocent, naturally. Got an A+ from a teacher who happened to be a lay minister!

Now I think the better defense for both Adam and Eve would have been incapacity. After all, they lacked capacity to form intent as to good/evil and right/wrong, at least as their creation was depicted in Genesis. After all, that was what, if eaten, the fruit of the Tree of Knowledge of Good and Evil would do: convey criminal capacity.

Ultimately, of course, the guilt should be laid at God’s feet: All-knowing + all-powerful = absolute responsibility and culpability.

No list will ever be perfect and the articles are short. However, I would agree with Maura McGowan’s article on the trial of Charles I.

That trial established that a head of state was subject to the law, although the conduct of the trial itself is questionable. Nevertheless, it compares more favorably than the trial of Louis XVI or the complete lack of a trial for Nicholas I. Also, let’s face it: Darrow was the greatest trial lawyer this country ever produced. Any trial attorney wishes he/she had half the skill Darrow did. If you read the tactics used to bring the charges against him, such as infiltrating the defense team, such tactics would get the district attorney disbarred today. Even though he was the greatest trial lawyer of the day, he still got an attorney—a point the Supreme Court noted in Gideon v. Wainwright. 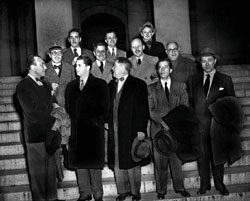 “Congress Holds ‘Hollywood 10’ in Contempt,” November, provides a picture of the 10 with a good summary of what this was all about. What was left out, however, was their identification by name. Like others before them who pledged their “fortunes and [their] sacred honor,” so too did the Hollywood 10. It seems fitting to remember them by name.

Regarding “Judge: Let’s Make Apps for Ex-Cons,” November: As an appellate and post-conviction attorney, I spend tons of time dealing with parolees. Trust me, GPS monitoring isn’t what it is cracked up to be. The technology is full of errors inside buildings. And the department of corrections in my jurisdiction both acknowledges the problem and simultaneously holds my clients responsible for the errors of their technology.

If your client works in a warehouse, many box stores, etc., they lose coverage in the middle of the building. In my office in a glass tower, I can’t use our small conference room with a parolee because the GPS fails. With sex offenders (regardless of the details of their crime), they can’t have smartphones (“devices capable of connecting to the Internet”) or devices with camera capabilities. How will the judge’s apps help them?

Because of the fiscal fall-out, our state (Michigan) has cut community re-entry and community treatment programs to maintain the prisons. I don’t see how you can fix these problems with an app. What you need is lower caseloads for parole officers and more one on one. You need to provide more programs to help people get back on their feet. The problem is that they are unpopular. Someone who doesn’t have a record and who is having a hard time finding a job is going to be resentful to the state giving assistance to someone with a record who beats them out for the job.

The problem is that ex-cons have so many problems getting any job that they need the help, and that it is in our long-term interest as a society to break the cycle and convert lawbreakers into taxpayers.

While technology provides limited solutions, and more parole officers are needed, the point Judge Ann Aiken is making is that we should all be alert to how technology might improve outcomes in parole and other cases, even though it can’t provide one all-encompassing solution.

In fact, Judge Aiken’s point applies across the board to every jurisdiction’s judicial system and all of their stakeholders. We should build upon this point and upon the legal profession’s vast ingenuity in every way possible.

Regarding “Donning, Doffing and Dialing,” November, about workers suing for time spent changing into work clothes: Should I be billing my clients for getting appropriately attired?

Workers should be thankful that their employers provide them with their personal protective equipment and clothing. Consider that male attorneys are expected to show up in a jacket and tie in every courtroom, and that those attorneys do not get to deduct the expenses of those uniforms because they have “dual purposes.” Funny how only people who “work” for a living seem to think they are entitled to walk away from their jobs at the end of the day.