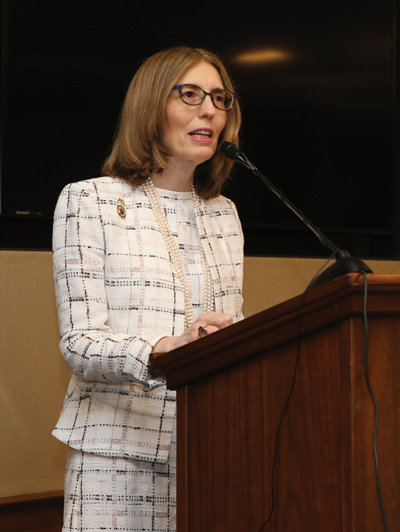 When ABA President Linda A. Klein read a piece in Forbes in early December that scolded the association for ignoring a laundry list of needs and issues, she didn’t respond with a letter to the editor.

Instead, Klein invited the columnist to breakfast, and they soon spoke over eggs.

“I was prepared for a bit of defensiveness,” says Mark A. Cohen, a Forbes contributor on law practice. “And what I received instead was a very constructive attitude, mixed with a bit of ‘Well, here are some things perhaps you didn’t know about the ABA.’”

Klein told him about her near-constant travel, which in her year as president-elect included a tour to meet with individuals and small groups of lawyers away from the big cities to learn about their needs. She walked Cohen through a slew of ABA initiatives that address matters he wrongly believed the association had failed take up, from access to justice and delivery of legal services to diversity and inclusion and defending the rule of law.

And Klein detailed her signature effort for the year, the ABA Veterans Legal Services Initiative, which has quickly brought together all manner of efforts by organizations and agencies around the country. It is fast becoming a high-impact, enduring legacy with a comprehensive network to help those who serve or have served in the military and who now suffer because of legal needs that often go unrecognized.

“Bottom line: The ABA is on the case,” wrote Cohen, a former BigLaw litigator and now the CEO of the Washington, D.C., consulting firm Legal Mosaic. Though he complained that the association should do better at promoting itself, he debunked his earlier column and listed a number of the association’s valuable works, including a tangible result of Klein’s listening tour: ABA Blueprint.

That web portal, which launched in November, offers one-stop shopping for solo and small-firm lawyers. Blueprint uses the ABA’s buying power to offer lower prices on a suite of practice management tools, a virtual receptionist and a variety of insurance coverage for lawyers and staff. Though Blueprint is available for all lawyers, ABA members are eligible for extra discounts that can tally more than the cost of membership.

Cohen seized on Klein’s style: the personal touch. He says she is “very pragmatic and open, and her EQ [emotional quotient] and people skills are extremely high. She’s just a thoroughly engaging and engaged person who is deeply committed to the profession, not her own aggrandizement.”

Although Klein is a big-firm lawyer in Atlanta, where she is the senior managing shareholder of Baker, Donelson, Bearman, Caldwell & Berkowitz, she launched projects geared to the little guys: active military and veterans needing legal services, and solo and small-firm lawyers who want to worry less about the nuts and bolts of starting, building and maintaining a practice.

Either of those efforts alone might have made for a significant presidential year, with other smaller ventures along the way. But there are years when a sudden, unanticipated event requires an ABA president to step up as the profession’s voice.

Klein was faced with two such events: first when President Donald Trump made personal attacks on a federal judge and later when he proposed zeroing out the Legal Services Corp. in his budget.

On Jan. 27, just five days before the ABA Midyear Meeting in Miami began, Trump issued an executive order banning travel to the United States from seven majority-Muslim countries. On Feb. 3, U.S. District Judge James Robart blocked the travel ban nationwide. The following day, Trump complained on Twitter about the “so-called judge” who “takes law-enforcement away from our country.”

Klein jettisoned her prepared remarks for the ABA House of Delegates meeting on Feb. 6. Instead, she issued a call to arms for lawyers to defend the rule of law in response to the apparently flawed executive order and personal attacks on the judiciary. Known for being cautious when treading into political territory as the head of the broad-based, nonpartisan association, Klein told the gathering that the Constitution itself was under attack: “This is the ABA’s defining moment.”

Klein was pointed but politic, making no mention by name of the administration or President Trump.

“Make no mistake, personal attacks on judges are attacks on our Constitution,” Klein told the 589-member House of Delegates and others in attendance. “Let us be clear: The independence of the judiciary is not up for negotiation.”

Shortly after her remarks, the deliberative body adopted two resolutions concerning the travel ban. One urged Trump to withdraw the executive order, and until doing so, to comply with court orders; the other reaffirmed ABA support for laws providing access to legal protection for refugees and asylum seekers.

Little more than a month later, Trump’s proposed budget set a death sentence for the LSC, a nonprofit created by Congress in 1974 to fund legal aid programs around the country, providing assistance to low-income Americans.

Klein immediately mobilized ABA efforts to save the LSC, and she has exhorted others in nearly every speech and meeting since then to push for its full funding.

“Within an hour or so of learning about the president’s budget, we put up DefendLegalAid.org,” she says. There, citizens can fill out forms to tell their own members of Congress why they want LSC funding to continue. Those were printed out at the ABA’s office and delivered to the legislators during ABA Day celebrations in April in Washington, D.C.

“Linda’s been there every step of the way, in fact, leading the band,” says John G. Levi, chairman of the LSC board. “She’s our champion.” For more about the efforts to save the LSC, see “The Fight for Legal Services.”

Since Klein was handed the ABA gavel as president in August, she has been exceedingly cost-conscious. For example, her approach to choosing the locations for two Board of Governors meetings broke from the norm: downtown Atlanta, rather than the pricier, conference-friendly Buckhead area; and Detroit, which went through bankruptcy and whose lawyers have a key role in saving and revitalizing the city.

It wasn’t just about saving money. Klein arranged for the association’s leaders to meet with Main Street lawyers and law students—not just BigLaw and local bar leaders—with some emphasis on non-ABA members.

In similar fashion, Klein has aggressively sought outside funding for various initiatives.

In one example, Klein sent out a letter to 30,000 members who hadn’t in the past donated funds for association efforts, asking them to give to the veterans initiative.

“She’s my hero,” says Jackie Casey, director of the ABA Fund for Justice and Education, who handles fundraising efforts. Casey says that volunteers often are hesitant to go out and ask for money. “I don’t know if she finds it easy, but she’s brave.”

According to Klein, “No one likes to ask other people for money, but when it’s for a good cause that I think they’d be interested in, I’m not shy about that.”

Klein’s passion rubs off on others, such as Nanette M. DeRenzi, a vice admiral who retired as the Navy’s judge advocate general in 2015. DeRenzi was just about to start a new career in the private sector when she was approached to co-chair Klein’s Commission on Veterans Legal Services.

DeRenzi had not been involved in the ABA before and feared taking on a time-consuming activity at the outset of her new job.

“Then I came in to talk to Linda,” says DeRenzi, the chief operating officer of the consulting firm Jefferson Solutions in Washington, D.C. “Two minutes into our conversation, I thought, ‘Whatever this woman is doing, I’m all in.’ She had passion, she had a plan, and she was putting herself into it.”

DeRenzi is overcoming her own inexperience and reluctance to fundraise. “I’ve never done it. But for this, I’m willing to learn and try to succeed.”

Separate efforts to assist veterans had been launched by both groups and individuals, including Veterans Affairs service officers, doctors, various legal aid providers, law school clinics and others.

Last June, 165 professionals from more than 100 organizations gathered in D.C. for the Military and Veterans Legal Services Network Summit, organized by the ABA and Army OneSource.

“By breaking down silos and putting all stakeholders in that same room, Linda’s initiative is really changing the dynamic,” says Heald. “This is creating a network, and thanks to Linda’s efforts, there will be lawyers waiting to help veterans. It is really the right initiative at the right moment in time.”

This article originally appeared in the June 2017 issue of the ABA Journal with the headline "Battle-Tested: Linda Klein is using her year as ABA president to advocate for veterans and defend the rule of law."