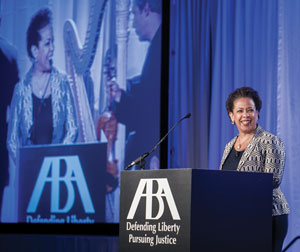 Lynch received a standing ovation during her keynote to the ABA’s General Assembly. She praised the association for its work on behalf of liberty and justice.

Lynch detailed efforts to stem terrorism, with safeguarding the homeland as her highest priority. She mentioned the increase in cyberattacks, from Sony to the government itself, and said U.S. Department of Justice officials have been meeting with corporate counsel and business executives to build public-private collaboration. She also spoke about continuing campaigns against human trafficking, especially of young women, and thanked the ABA for its help in that area.

Lastly, Lynch spoke about initiatives to heal relations between law enforcement and communities of color. The DOJ has joined efforts in several cities, such as Cincinnati and East Haven, Connecticut, where collaboration among stakeholders has been rebuilding trust. “In the days ahead, through the strength of our conviction, the force of our actions and the power of our just cause,” Lynch said, “we will make the difference that our citizens need.”

Preceding Lynch’s speech, the ABA Medal, the association’s highest honor, was presented to Roberta Cooper Ramo, the first woman to serve as ABA president. She is a partner at Modrall Sperling in Albuquerque, New Mexico.

Ramo’s acceptance speech was a rousing recitation of how much others had done to help her in her career and public interest work. She told the assembly she had looked back at the list of previous ABA Medal recipients and found something in common with two of them—U.S. Supreme Court Justice Ruth Bader Ginsburg and retired Justice Sandra Day O’Connor: “A wonderful feminist husband.”

Finally, Ramo told the assembly: “So now, I give this medal and all it carries with it—a history and responsibility—back to each lawyer and each judge sitting in this room today.”

This article originally appeared in the October 2015 issue of the ABA Journal with this headline: “Lynch Sees Success: Attorney general praises ABA efforts in sentencing reform.”