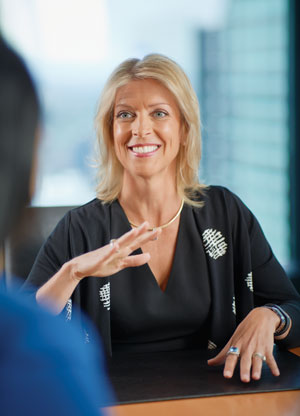 McCarthy Tétrault was looking for a leader, someone who could help the large Canadian law firm navigate the muddy waters of a quickly changing profession. So the firm decided to hire Tracie Crook—a longtime business executive who has never worked for a law firm.

“When I joined, no one said being a nonlawyer or an outsider there would be a distinguishing factor,” says Crook, chief operating officer for one of Canada’s “Seven Sisters” leading law firms. “A lot of that has to do with our CEO and the type of place I would work. I didn’t feel that I was treated any differently.

“The point is that the industry is changing and needed new skills. We need to recognize diversity of skill, gender and be progressive. We innovate much easier when we are ready for it and receptive to it.”

Crook has made her career as a change agent. The longtime executive worked for the Toronto Stock Exchange as director of business management, where she helped streamline processes, resulting in $3 million in savings. Her role as president and CEO for ResMor Trust Co., which specializes in residential mortgage servicing, captured the attention of McCarthy Tétrault.

“I work at organizations that know they need some type of change,” says Crook. “The leadership team … wanted the firm to continue to lead in the industry and wanted to continue in the trend of building a strong delivery team.”

Crook joined McCarthy Tétrault in 2011 as COO, working alongside Marc-Andre Blanchard as CEO. In January, Blanchard resigned to take on a new role as the U.N. ambassador for Canada, but Crook does not see that changing her role.

Crook quickly assembled a firmwide service team focused on innovation, growth and efficiency. Their first task was to gather feedback from hundreds of lawyers, paralegals and support staff on what needed to be changed in the firm. Crook also created a client service team and a product development management team to focus on efficiency.

Perhaps the biggest change to date is Crook’s initiative on office workspace: She believes the key to an efficient work environment lies in the space.

Gone are the typical corner offices and windowless rooms. Since the Quebec City office, the first to get the makeover, made the switch in July 2015, printing costs have decreased by 35 percent.

“We asked people: How do you work today? What are your challenges and how do you want to work in the future?” says Crook. “That was the foundation of the design.”

Partners are no longer in the corners; they are in the middle of the room with glass offices for greater access. Mathieu Laflamme, a partner and Quebec City office lead, says the changes have helped him to collaborate more.

“The biggest change with the new hybrid concept is the improved teamwork and collaboration,” he says. “Being an introvert, I used to work behind closed doors in our former traditional offices. Even though I liked when people came to my office, I didn’t really see other team members as much as I do now. … I really enjoy it.”

The beauty of the new workspace is a mix of open environment, collaboration and a little bit of privacy. Lawyers and staff are no longer confined to one desk; each person uses the laptop of his or her choice and headset technology. Glass offices are also available for quiet work.

“If I’m working with another lawyer on a file, instead of just working in my office, we can work together in the cafe … area,” says Laflamme. “It’s a great way for us to interact with each other.”

Perhaps the most positive change is the open views for all. “Everyone has access to light and has great views,” Laflamme says. “Our staff and junior lawyers didn’t have that before. It really helps in our teamwork.”The long-term plan is to renovate the other four Canadian offices in Calgary, Montreal, Toronto and Vancouver.

“Our space is a little different from the Googles and Apples of the world,” says Crook. “It’s the best of both worlds.”

This article originally appeared in the June 2016 issue of the ABA Journal with this headline: “Change Agent: Toronto’s McCarthy Tétrault chooses a nonlawyer to redesign the firm.”