Tips on getting your message across to the media 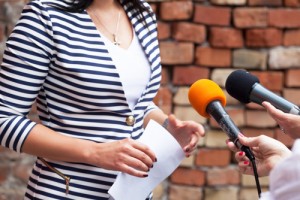 Speak in plain language. Be familiar with the topic at hand. Keep your comments short and sweet. While these tips may sound simple, dealing with the media can involve certain nuances. And putting these guidelines into practice gives lawyers an advantage in courting coverage.

As a former war correspondent for the Washington Post and a former legal correspondent for Reuters, Rebecca Hamilton was no stranger to the media. But her view on media changed when she went on her book tour for Fighting for Darfur: Public Action and the Struggle to Stop Genocide.

“I learned the value of talking points,” says Hamilton, an assistant professor at American University’s Washington College of Law. “It sounds basic, but you need to have them rehearsed in advance if you want them to come out in the story. The challenge of a book tour is that in your head you have all the details, but you need to put them into context for people.”

After graduating from Harvard Law School in 2007, Hamilton was a prosecutor at the International Court of Justice for two years. Her writing career began covering the conflict in South Sudan for the Post. She learned that finding the best sources for stories can be challenging—something that lawyers need to be aware of.

“The first thing is that it’s completely appropriate to say to a journalist, ‘I’m the wrong person to talk to,’ ” Hamilton says. “Your biggest contribution could be to point them to the right person.”

When working with journalists, find out the focus of the story and what information is needed from you. And watch out for using too many technical or legal terms.

“Some lawyers are so immersed in their field that they can’t talk like a normal person,” Hamilton says. “Talk to the media like you would talk to your mom. Know the value of short quotes. If you speak in long sentences, then there’s a danger of having your quotes shortened and then feeling like the quote doesn’t represent what you said.”

“Have your main bullet points and one or two sub-points,” Burke says. “Think about what you really want to drive home. For press releases, the more concise and interesting, the better.” When standing in as spokesperson during a crisis, it’s important to have strong relationships with media outlets to get your message out as quickly as possible.

“You want a short statement that can be published in full as is,” Burke says. “While the first instinct of litigators is to talk, sometimes that’s not the best approach to handling the media during a crisis. ... Don’t give a substantive opinion or make promises.”

Become the go-to person, not only in your area of expertise but as someone who can identify other great sources for stories.

“Look for the long-term relationship,” Hamilton says. “If you give a good referral, they will remember you.”

This article originally appeared in the September 2016 issue of the ABA Journal with this headline: “Savvy Speaking: Here are some tips on getting your message across to the media.”