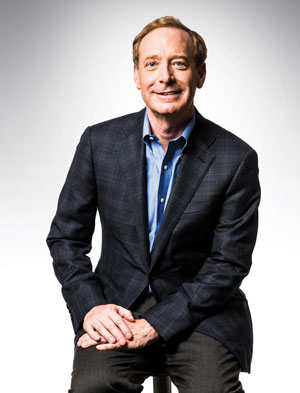 Microsoft Corp.'s president and chief legal officer, Brad Smith, has long been a champion for racial and gender diversity. Indeed, he says that he's believed in the benefits of diversity since he was in grade school.

“I had the opportunity in the sixth grade to leave the southeastern Wisconsin suburbs and go to an integrated school,” says Smith, who was in Chicago last fall for the sixth annual meeting of the Leadership Council on Legal Diversity. “This was my first opportunity to sit in a classroom with students who were African-American, and it was a wonderful experience. It really opened my eyes as to what people can accomplish when we have the opportunity to learn from each other, and that has always stuck with me. I really do think that diversity doesn’t just make everyone better—it’s made me better.”

Smith, who serves as the LCLD’s board chairman, had plenty to be happy about. According to him, the council’s diversity pipeline programs have grown dramatically during the organization’s six years of existence.

Smith cites the LCLD Fellows Program, which allows firms and companies to hand-pick up-and-coming minority and female midcareer attorneys to receive guidance and training to prepare them for leadership positions within those firms or companies. There were a record 209 fellows in 2015, he says, a number that has grown consistently since the program started in 2011 with 125 fellows.

The council’s 1L Scholars Program, which allows students to work at a law firm or in-house department during the summer after completing their first year of law school, is also growing. Smith reports 190 1L Scholars in 2015, up considerably from 2011, when the program debuted with 46.

Meanwhile, the LCLD’s law firm mentorship program has had 3,160 mentor/mentee pairs, and Smith hopes to increase that exponentially by the time the council celebrates its 10th anniversary. His goal is to have a direct impact on 10,000 people in the legal profession by 2020.

Additionally, the Leadership Council on Legal Diversity launched the Pathfinder program in 2014, which provides guidance, training and networking opportunities for early-career attorneys with three to five years of experience.

Some firms and schools have come up with their own pipeline programs. In October, K&L Gates announced a partnership with the University of Pittsburgh School of Law to create the K&L Gates Diversity Fellowship. Starting this fall, one qualifying student will receive three years’ paid tuition to Pitt Law and a summer associate’s job at K&L Gates after both the 1L and 2L years.

And in April, the University of Washington School of Law announced the Gregoire fellows program. The school chose 10 minority and female students to receive partial scholarships and paid summer jobs with top law firms and companies in the state, including Microsoft, Amazon and K&L Gates.

Despite the increase in diversity pipeline programs, diversity within the legal industry continues to lag behind comparable industries. In a study released in early October, the New York City Bar Association had good and bad news when it came to diversity at New York City law firms. The bar association reported that the number of female partners at the firms taking part in the survey hit a record high in 2014, and it also saw an improvement when it came to women in leadership roles at city firms. Other than that, it was mostly bad news as the study found that attrition rates for minorities and women continue to outpace those of white men.

Among all attorneys, the study found that 23.6 percent of minority attorneys and 21.3 percent of women left their firms last year, compared to 14.7 percent of white men. For associates, the attrition rates were 27.2 percent for minorities and 26 percent for women, both marks beating the 25 percent national average as reported by The American Lawyer.

For all his pride concerning the LCLD’s efforts, Smith knows more needs to be done. “It remains sobering to see the relative dearth of African-Americans and Latinos entering law school,” says Smith, who notes that those two groups make up about a quarter of all college grads but only 15 percent of law school students. “We do a good job moving women through law school, but we need to work on retaining them as their careers progress.”

Smith hopes the legal profession will learn from others, particularly medicine and business. “I don’t think that we’re going to build a more diverse profession simply by working harder,” he says. “We must innovate and work in new ways.”

One new way of working might be for clients to force their outside counsel to embrace diversity. Microsoft has created a law firm diversity program for the 15 firms the company works with the most.

“We’ll pay them a bonus equal to 2 percent of all the fees they bill us during the year if they meet defined diversity goals,” says Smith. “During the six years we’ve done this, we mainly focused on promoting diversity within the composition of teams working for us or firms as a whole.”

Beginning this year, however, Microsoft is starting to evaluate its outside firms based on diversity within their leadership ranks. Smith says that law firms can earn their diversity bonus by having minority or female partners manage Microsoft’s account, have a diverse management committee, or tap minority or female partners to serve as first-chair litigators or lead deal attorneys.

“As we work with law firms, we need to partner together to create more diverse opportunities for lawyers at all levels,” Smith adds. “The time has come for us to focus more squarely on leadership.”