Milking It: Raw Milk Advocates Lose the Battle But Win the War 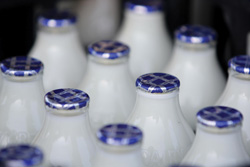 Constitutional questions involving personal liberty are at play on a very public stage in the “Obamacare” case pending before the U.S. Supreme Court, but the issue also is playing out on a much smaller scale involving milk. That’s right, milk.

Two years ago, a little-known group called the Farm-to-Consumer Legal Defense Fund sued the U.S. Department of Health and Human Services and the Food and Drug Administration over the right to sell and consume a certain kind of milk. The suit, which was dismissed at the end of March, claimed that the various federal regulations that ban the sale and consumption of the milk violate constitutional rights to privacy, travel and due process.

“The court has held that under the right to privacy, there’s a fundamental right to raise a family, a fundamental right to custody and care of your children. And what’s more basic to custody and care of your children than providing what you believe to be the proper nutrition?” asks Peter Kennedy, president of the Falls Church, Va.-based Farm-to-Consumer Legal Defense Fund and a lawyer in Sarasota, Fla. “It should be your responsibility to make that determination, not the FDA’s.”

Legally speaking, the milk that members of the fund—a mix of natural food fans, gourmands, small-government libertarians, immigrants and small farmers—want to consume is not milk because it isn’t pasteurized. Under various federal and state regulations, milk must be pasteurized to be legally labeled as milk.

And selling and consuming “raw milk” is even more problematic. Eleven states currently ban all sales and four more allow sales only as pet food, with the remainder allowing or tolerating various kinds of sales for human consumption.

Raw milk enthusiasts believe it not only tastes better but also fights a variety of health problems from allergies to cancer because, they claim, it retains nutrition and beneficial bacteria destroyed by pasteurization. Federal authorities, on the other hand, are not so sure. Federal public health policies, dating back nearly 100 years, have encouraged state and local laws requiring the pasteurization of milk for public health reasons.

The federal judge hearing the fund’s milk challenge dismissed the case on standing grounds since the fund could not prove injury because the FDA, in the course of litigation, said it does not enforce the interstate sales ban on raw milk. And with that, the group saw a small victory.

“We lost the battle but we won the war,” says Gary Cox, the fund’s Columbus, Ohio-based general counsel who also is an organic vegetable farmer. “Sure, the case is dismissed, but we also have a decision that basically says the interstate ban is not enforceable and that’s why the FDA is not enforcing it, so people can take raw milk across state lines all they want.”