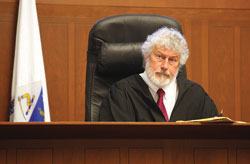 Judge Raymond Dougan’s leniency has prosecutors routinely asking for his recusal, and defendants referring to him as Judge Let-Me-Go. Photo by Suzanne Kreiter/The Boston Globe via Getty Images.

When Massachusetts disciplinary authorities resumed their secret questioning of Boston Municipal Judge Raymond G. Dougan Jr. in late August, they had to do it with one hand tied behind their backs.

Sure, authorities got to ask lots about nearly two dozen cases prosecutors say show Dougan’s pattern of bias toward criminal defendants. From publicly available court documents and transcripts, they could ask exacting questions regarding the controversial judge’s conduct in the cases. They could ask about police testimony, motions to suppress and other pretrial proceedings, as well as bail and sentencing decisions.

But most significantly, the state Supreme Judicial Court froze investigators in their tracks on Aug. 9 when it denied them a chance to ask perhaps their most burning question: What was Dougan thinking? Could they see his notes, diaries and other personal papers?

No way, said the judge. Public conversations and documents are fine, he said, but he wasn’t about to let the authorities pry into his mind. So the case took a detour through a largely inhospitable state supreme court.

In a case of first impression for Massachusetts, the state supreme court recognized an absolute judicial deliberative privilege, placing off-limits judges’ mental impressions and thought processes in reaching decisions, whether committed to memory or written. The court also protected confidential communication between judges and court staff related to deliberations in a case.

Suffolk County District Attorney Daniel F. Conley had carped to the state Judicial Conduct Commission that Dougan abuses his position with unwarranted leniency toward defendants, which he accomplishes with a full battery of illegal or improper judicial weapons at his disposal.

They include imposing illegal sentences, canceling other judges’ bail orders, illegally vacating guilty pleas, disregarding privileged status of victim-witness advocates, and disclosing the identity of a confidential informant. Prosecutors say Dougan also induces defendants to opt for bench trials instead of juries, telling lawyers he doesn’t know that they should ask about his reputation, implying they could catch a break from a bench trial that may be unavailable if a jury decides the matter.

“It’s a long-standing pattern of bias that includes dozens and dozens of unlawful decisions,” says Conley spokesman Jake Wark.The court was unimpressed by a subpoena issued by the outside lawyer the commission hired as special counsel to investigate Dougan. The subpoena demanded “any notes, notebooks, bench books, diaries, memoranda recordation or other written recollections of any of the cases.” Judges typically consider such material personal and none of the public’s business. Dougan’s papers will stay that way.

“Special counsel has not cited, nor have we been able to locate, a single case rejecting the existence of a privilege for a judge’s mental processes or intracourt deliberative communications,” the unanimous court wrote.

• Finality: If judges were called upon to impeach their own decisions, it would rob the parties of their right to rely on them.

• Quality and integrity in decision-making: “Judges cannot be burdened with a suspicion that their deliberations and communications might be made public at a later date.”

• Independence and impartiality: “The judiciary’s independence from other branches of government and from outside influences … has been one of the cornerstones of our constitutional democracy, intended to ensure that judges will be free to decide cases on the law and the facts, as their best judgment dictates, without fear or favor.”

At a time when legislators, governors and voters are trying to rein in the judiciary, the bold strike by a prosecutor directly at the heart of judicial independence sent shudders down the collective spine of Boston’s defense bar.

“The defense bar in Massachusetts is quite out of sorts over what to do about this,” says Dougan’s lawyer, Michael B. Keating, who also has served as special counsel in two other commission cases. The judge’s case is now back at the commission, which could have a ruling by the end of the year. Commission rules prevent Dougan from commenting. Also silenced is the special counsel probing the judge, J. William Codinha.

The records remain secret if the commission takes no action. But the commission and public have plenty of places to sniff around for judicial misconduct, the state supreme court said. “Judicial misconduct investigations have been pursued successfully, not by examining the judge’s thought processes but rather by identifying the judge’s outward expressions of partiality, or by examining the judge’s conduct over time through which that partiality or other abuse has become apparent,” wrote Justice Francis X. Spina. “Accessing these sources does not require intrusions into deliberative process of judges.”

In other states, usually through the ballot box, voters long have sought to knock judges from the bench for unpopular rulings, such as a 2010 decision legalizing same-sex marriage that cost three Iowa Supreme Court justices their jobs at the hands of voters.That won’t work in Massachusetts, where judges are appointed for life and face mandatory retirement at age 70. Dougan, appointed in 1991, doesn’t give his age in various profiles, but his lawyer says he’s rapidly approaching retirement.

“They’ve been gunning for him fora long time,” Keating says.

Other public officials also have gotten cross with judges from time to time. In 2011, Connecticut police attempted to arrest a judge who refused to sign a warrant. In San Diego in 2010, the district attorney boycotted a judge after a ruling favoring a convicted child molester.

“Being a judge in Massachusetts is not a popularity contest,” says Thomas M. Hoopes, chair of the Fair and Impartial Courts Committee for the Massachusetts Bar Association. “A series of bad decisions doesn’t amount to bad conduct.”

No one must have told that to Conley, who probably has carried his quarrel with the bench further than most. His prosecutors routinely ask Dougan to recuse himself, saying he can’t be fair, and Dougan just as routinely refuses. Under orders from the state supreme court justice who supervises the Boston area, Conley sent a prosecutor to Dougan’s courtroom to ensure he was properly advising alien defendants on how their cases could affect their immigration status. And he has taken the rare step of filing the complaint against Dougan with the commission.

Elections and retention campaigns are one thing—candidates need votes. But it gets scary when a single prosecutor tries to push a life-tenured judge from the criminal bench. “That was particularly troubling,” says Peter B. Krupp, amicus chair for the Massachusetts Association of Criminal Defense Lawyers, which filed a brief with the state high court. “Prosecutors, if you will, have a disproportionate advantage to chill judges with complaints” to the Judicial Conduct Commission.

Still, Conley apparently isn’t out to trash Dougan’s career. He just wants the commission to move the judge to the civil bench. Nevertheless, Dougan is the one judge criminal defendants want to face in municipal court, which hears misdemeanors, criminal and civil traffic charges, low-level felonies and small civil cases. “Judge Let-Me-Go,” the defendants call him.

Indeed, a 2011 Boston Globe review of Dougan’s cases found appeals courts since the mid-1990s have reversed or modified Dougan’s decisions 28 times, more than any other judge on the municipal court bench.

Conley, who for years had privately groused about Dougan, went public in a big way in April 2011 with an omnibus recusal motion demanding that Dougan withdraw from a drug case before him, as well as all other criminal cases—now and in the future.

“The recusal of Judge Dougan is required as he lacks the appearance of impartiality, and as the historical record he has established is one from which an objective observer would have a reasonable doubt about his impartiality and bias,” Conley argued.

The judge perused the 72-page tome, then denied the motion. Massachusetts lawyers say their court’s decision may become a leader for its exacting analysis. “There’s not a lot of other case law out there,” says Dougan lawyer Keating, “because no one has thought to challenge this.”