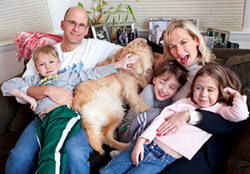 Ross Eagle and Diana Kenworthy
with their children Jacob, 6; Noah, 8; and Rachel, 4
Photo by Callie Lipkin

For nearly a decade, Sarah Ricks and her husband, Tom Dolgenos, canceled or postponed every family vacation. They had two busy law careers and, by 1997, two children.

During one 18-month period, Ricks, now 46, logged so many hours in Philadelphia’s city law department, she almost never saw her infant daughter awake. Dolgenos took care of everything at home in the evening.

“I managed; I was never fired, but I can’t remember any other time that I was so tired,” says Dolgenos, 46, chief of federal litigation for the Philadelphia district attorney’s office. “I would get Kate asleep at 8, 9 or 10, depending upon her mood, and then I’d have to work in the living room in my pajamas, trying to write a brief and hoping she wouldn’t wake up because Sarah wasn’t home yet to help.”

Perhaps nowhere in the legal world is it harder to balance work and life than in a family with two lawyers. But with women now making up nearly half of all law students, juggling life as Mr. and Mrs. Esquire—and Mom and Dad too—has become an increasingly familiar challenge, and one that doesn’t always offer easy answers.

“In many workplace environments, particularly law firms, full time is defined as 60 to 70 hours [a week], and for one parent to do that, it means the other is functioning as a single parent,” says Joan C. Williams, a professor at the Uni­versity of California’s Hastings College of Law in San Francisco and co-director of the school’s Project for At­torney Retention. “Two parents doing that is beyond the imagination of many parents.”

Which isn’t to say it can’t be done.

“You need to define your priorities and stick with them rigorously,” Williams says. “It is possible for both parents to have intense careers and the kids to do just fine.” But, she adds, “that’s not what most families do.”

Female lawyers are still far more likely than their male counterparts to drop out of law or downshift to part time. Nearly 40 percent of female lawyers with children had worked part time compared with almost no men, according to a 2007 study of 1,000 Massachusetts lawyers by the MIT Workplace Center.

But those aren’t the only paths available to dual-practice couples, of course. Men can seek jobs with fewer hours, both parents can choose to move at a slower pace or they can take turns being “lead parent.”

The key, says Williams, is “to discuss this up front.”

Ross Eagle, 42, is a criminal de­fense lawyer in Chicago; his wife, Diana Kenworthy, 40, is a Cook County, Ill., judge. The couple decided early on that they wouldn’t pursue big-firm careers. They opted for flexi­ble hours and beat-up cars. Their calendars were “half court dates and half things like school plays,” Kenworthy says.

For about eight years after the first of their three kids was born, Kenworthy and Eagle were in practice together with a third partner. They melded their schedules, trading back and forth on office time, work-from-home time, court dates and school pickups. They carried full caseloads and they attended parent-teacher conferences.

When they decided in 2007 that Kenworthy should run for judge, they talked about the sacrifices and worked out a plan. Eagle held down the fort at home on top of his own job while Kenworthy campaigned.

“I only smile now because she won,” Eagle says jokingly.

The key to their two-lawyer balance, they say, is that they made conscious choices and they made them together.

For Ricks and Dolgenos, balance came in 2001 when their children were 6 and 3: Ricks became a professor at Rutgers School of Law-Camden and “reappeared as a presence in their lives.”

Life is still busy—Ricks works seven days a week and Dolgenos has had three cases reach the U.S. Supreme Court in the past five years—but it is flexible. The past two summers, the family even planned trips to Italy.

And both times they went.

Hollee Schwartz Temple is a professor at West Virginia University College of Law. Becky Beaupre Gillespie is a journalist who has written on work-life balance issues for several major metropolitan newspapers.