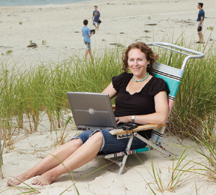 In the last year alone, Deborah Epstein Henry gave 35 speeches on the most pressing issues facing female lawyers. But Henry, who spent the past decade transforming a small support group for working moms into an industry leader on women’s issues, says her career path was heavily influenced by two men.

Henry’s father, Dr. Stanley Epstein, taught her by example in the late 1970s when he petitioned the family’s synagogue to give his daughters the same privileges afforded to boys. Twenty years later, her husband, Gordon Henry, helped her understand the importance of work-life balance when a spat over a party gift caused her to rethink her life choices.

“I remember telling her that she must have too much stress in her life if she was yelling at me and causing friction in our marriage because I bought the wrong Power Ranger,” says her husband of 16 years.

The incident, which both laugh about today, convinced Henry she couldn’t successfully juggle a litigation practice, her fledgling women’s group and modern motherhood. So in 2002 she quit her practice to focus on Flex-Time Lawyers, now a major voice on both work-life balance and the promotion and retention of female lawyers. In the past 10 years Henry has advised dozens of law firms on reduced-hours policies. She has also partnered with Working Mother magazine since 2007 on its annual survey of best law firms for women. (See Working Mother’s latest list of top law firms for women.)

Henry, then a mother of two small boys, started holding monthly meetings in Philadelphia, offering networking and support to attorneys working reduced hours. She spent the next three years growing the organiza­tion (adding a Manhattan chapter in 2002), writing articles, speaking to national audiences—and adding a third son to the mix.

When she left her law firm to make Flex-Time Lawyers her full-time career in 2002, she turned a profit on the day she incorporated.

Between her consulting work, speaking and writing engagements, and communications with the nearly 10,000 who have joined her e-mail list over the years, Henry’s plate is full; but she dictates her own schedule.

When her youngest started kindergarten, she started working “bus stop hours,” squeezing most of her work into the seven hours when her boys are at school. A self-described morning person, she averages 6 to 7 hours of sleep and is typically at her computer by 5:30 a.m. She takes a break at 7 a.m. to get the kids ready, then pumps out as much work as she can before pickup time. When the bell rings, she’s in full-time-mom mode; over the years, she’s run the school chess club, coached multiple soccer teams and served as the “homeroom parent” for each child.

Henry tries to limit her monthly speaking schedule to two overnight stays—in 2008, she averaged three talks per month. Her business trips double as “personal days” during which she crams in haircuts, long-distance runs (she’s finished two marathons) and visits with friends. Her husband gets a page of single-spaced instructions for each trip (“which he follows,” she adds), and her babysitter of 11 years helps too.

In 10 years, Henry has seen the profession’s take on personal-life issues expand to both genders. When she started her group, the conversation focused on the demographic she represented: young working mothers who wanted to play an integral role in their children’s lives and still be good practitioners. Now work-life balance is “moving further away from being a mommy’s issue,” and that’s helped bring changes to law firms across the country, she says.

But Henry has also seen balance eroded by technology that keeps lawyers on call around the clock, thwarting attempts at exclusive family time. She cites an increase in attorneys heading to exotic, technolo­gy-free locales for vacation as evidence of the problem, even though she’s rarely far from her own Black­Berry. (Being savvy at grabbing headlines, Henry doesn’t want to miss a chance to comment when media outlets call for her reaction to breaking news.)

“The technology becomes punishing because it prevents lawyers from having any real downtime or escape,” she says.

This applies to Henry, too, who has been known to conduct interviews while making lunch for her kids or vacationing with her family at the beach.

The other unsolved challenge is the retention and promotion of female attorneys. While she laments the statistics—the Na­tional As­so­ci­ation of Women Law­yers recently re­ported that women make up not even 16 percent of equity partners—Henry sees the economic downturn and po­tential demise of the billable-hour model as an opportunity.

“If the commodity becomes some­thing other than time—if it becomes quality services being offered efficiently—women may be more engaged in staying and reaching new heights,” she says.

Bobbi Liebenberg, a Philadelphia lawyer and chair of the ABA Com­mis­sion on Women in the Profession, cites Henry’s novel suggestions for making reduced hours work as her biggest contribution to the field. Henry recently floated a proposal called FACTS, an acronym for a new methodology that offers several options for lawyers seeking reduced schedules within the traditional billable-hour model. FACTS stands for fixed, annualized, core, targeted and shared hours.

“She is on the cutting edge of how firms can implement these sorts of arrangements successfully,” Liebenberg says.

Henry practices the flexibility she preaches, employing both a virtual assistant and a virtual law firm to handle her legal matters. She works from everywhere—her suburban Philadelphia home office, the road, and her parents’ beach house in the heat of the summer.

Up next? A book that brings together her 10 years of expertise on these issues, to be released by ABA Publishing in early 2011.

“I’m convinced that having control and flexibility enhances my productivity and the quality of my work product,” she says. “My job is the perfect marriage of flexibility and substance.”

Becky Beaupre Gillespie is a Chicago-based journalist who writes on issues of work-life balance. Hollee Schwartz Temple is a professor at West Virginia University College of Law.

Lawyer Wellness | Careers | Women in the Law | Business of Law