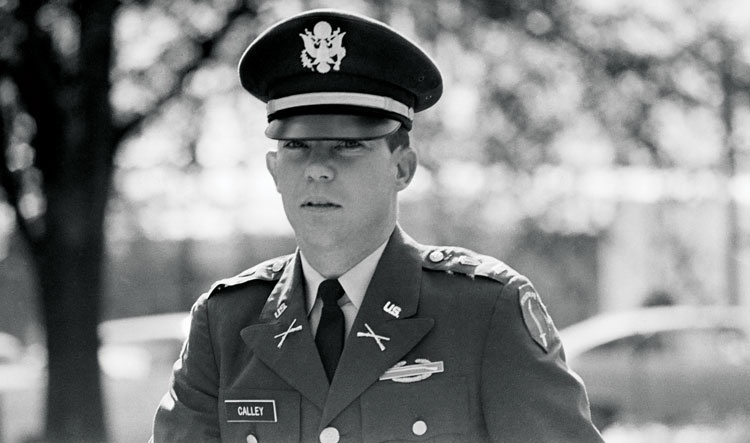 On the morning of March 16, 1968, Warrant Officer Hugh Thompson was guiding his helicopter over My Lai 4, a small village in Vietnam’s Quang Ngai province known to American soldiers as “Pinkville.”

Until the Tet Offensive just six weeks before, the village long had been a stronghold for the Viet Cong, and Thompson’s job was to locate enemy concentrations for a battalion-size unit known as Task Force Barker. His gunner had fired at an armed man seen running from the village, but it was the last “enemy person” Thompson saw that day.

Crisscrossing above the village, Thompson and his crew were suddenly seeing bodies: old women, old men, young women, infants and toddlers. “Everywhere we’d look, we’d see bodies,” Thompson said years later. Spotting a young woman clutching a wound, he radioed for help and marked her position with smoke. “A few minutes later, up walks a captain, steps up to her, nudges her with a foot, steps back and blows her away.”

Thompson saw a ditch with more bodies, some still moving. He landed and asked a sergeant nearby for help. When the sergeant promised to put them “out of their misery,” he shrugged off the answer as dark humor. But as Thompson walked away, gunfire erupted in the direction of the ditch where he later estimated he had seen as many as 100 bodies, not one of them a draft-age male.

The situation as later determined was even worse. The three companies of Task Force Barker had landed “cold” that morning—without resistance. Two circled and contained the village while a third, C/1-20 INF, followed orders to sweep and destroy. Commanded by Capt. Edwin Medina and Lt. William P. Calley, they entered the village firing; they burned houses, tossed grenades, killed livestock and shot fleeing civilians. There were rapes, including the gang rape of a young girl. An old man was bayoneted to death; another was tossed into a well followed by a grenade. Women, children and babies were killed as they sat in their burning houses.

Other killings were more organized. One group of 30 to 50 noncombatants was rounded up. Seeing the prisoners, Calley asked a soldier, “How come they’re not dead?” then stepped back and emptied four or five clips from his M-16 into the unarmed villagers. Later, at a nearby ravine, the scene was repeated, this time with 75 to 100 unarmed men, women and children. A news release about the incident described a “running battle” that left 128 Viet Cong dead.

The fog of war—the uncertainty and confusion of battle—makes prosecution of war crimes difficult, at best. Dead civilians become collateral damage—the lamentable result of bad aim, poor training and faulty intelligence. But when the chain of command is complicit, it becomes all but impossible.

In March 1969, a mimeographed letter from a former soldier named Ronald Ridenhour broke the official silence. It described the slaughter in detail, including the geographic coordinates of Pinkville. The House Armed Services Committee inquired, and the Army promised to investigate. The problem was they already had.

On his return to base, Thompson reported what he saw to his commander, who in turn reported it to the commander of the Pinkville operations, Lt. Col. Frank Barker. When Barker shrugged it off, a second investigation was ordered. The resulting Henderson Report was a two-page memo concluding that 20 civilians likely had been killed at My Lai by artillery and gunships.

When the Army returned to Congress on Sept. 5, 1969, it was to report charges against Calley for the deaths of 109 Vietnamese civilians. Calley later was convicted and sentenced to life in prison, but he was released after 3½ years.

The only other soldier tried was Medina, who was acquitted of killing more than 100 innocents. He admitted shooting the woman Thompson described, but he claimed he thought she was carrying a grenade.

The Peers Report, an exhaustive independent military investigation, identified 28 officers and commanders who had suppressed, omitted or outright lied about their knowledge of the potential war crime.