From Defendant to Attorney: My journey to the other side of the justice system 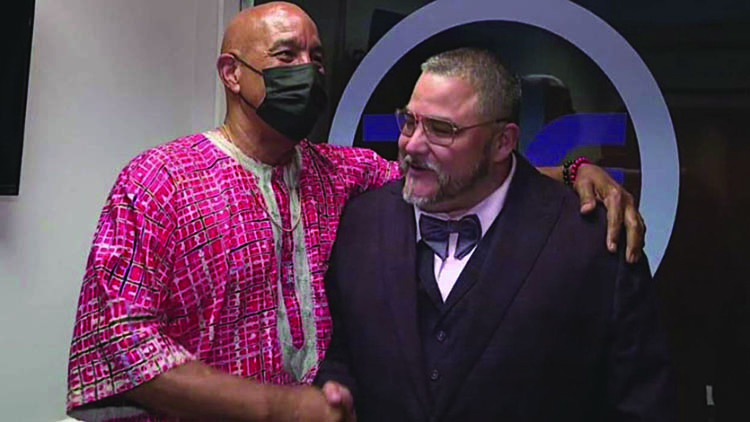 Ed Martell (right) stands with Judge Bruce U. Morrow, who served as a mentor and swore him in as a lawyer. Photo courtesy of Perkins Law Group.

My crash course introduction to the justice system came at a high price. At age 12, I was picked up from school by my mother one day without notice. My aunt and female cousin of the same age, who was in the same grade, joined us. I didn’t have a clue where we were headed, but it turned out to be a day I will never forget.

Upon arrival, I looked up and found myself at what I now know to be the Frank Murphy Hall of Justice. My mother explained that her eldest brother was on trial for an offense for which he had been falsely accused.

Walking in the courtroom, I saw my uncle, seated quietly at the woodgrain desk next to a man in a suit. By the look in my mama’s eyes, I knew the situation was serious.

The one-witness trial lasted only a few hours. Afterward, my cousin and I sat impatiently on the hardwood courtroom bench expecting justice for our uncle; however, what we received was a blow from which my family has yet to recover. My uncle was found guilty and sentenced to seven years in the Michigan Department of Corrections.

His calls from inside still haunt me today: “Eddie, don’t ever come to this place,” he would tell me. My uncle served nearly all of his seven-year sentence.

Two weeks from release, he was found dead, tossed from the top tier of his cellblock. This was my introduction to the criminal justice system.

Born into poverty, I was the middle child of three, raised by a young mother in a low-income housing complex on the outskirts of Detroit. A proud Latina, my mother raised me to the best of her ability. Unfortunately, without the guidance, discipline and direction of a strong male role model, I succumbed to the temptation of the streets at an early age. By 13, I was convicted of my first juvenile felony offense. By 15, I was incarcerated in the Wayne County Youth Home on a second felony offense. Upon release, I dropped out of high school, left home and became fully submerged in the street life.

Life on the streets is not pretty or glamorous. It’s survival of the fittest. I jumped into the drug game around 15, selling street-level bags of marijuana. Back then, I ran with a small crew of five. I quickly learned how to hustle crack cocaine, which at that time was on many street corners in urban America.

A natural businessman, I quickly established myself as a rising star, growing from a local street dealer to a regional supplier. By 19, I was well known, and my life path was set in stone—or so I thought.

The year was 2005. I was 27 and securely set in my ways; however, God had another plan for my life. By then, I was no stranger to the justice system, having been a defendant in most courts throughout Wayne County. I had been to the Frank Murphy Hall of Justice several times prior, but I had managed to avoid prison time or even a felony conviction. This time, however, I was at the center of a drug sting operation with a confidential informant and marked money. I was facing up to 20 years in the Michigan Department of Corrections for delivery of a controlled substance.

After arraignment, I sat in the Wayne County Jail deliberating my next move. I had finally hit rock bottom and was headed to prison. After posting bond, however, I was back on the street and quickly reverted to the only thing I knew: street commerce. Less than a month later, I was caught in another drug sting operation. At that point, I was certain I would see the inside of prison walls.

But amid the chaos, I received a miracle from behind the bench, of all places. Enter Third Circuit Judge Bruce U. Morrow, a Detroit native, former public defender and veteran of the criminal law bench. Morrow is best known for his judicial philosophy of providing defendants with the opportunity to prove themselves. And that is exactly what he did.

Judge Morrow imposed a sentence that combined grace, mercy and discipline, including a three-year probationary sanction in lieu of prison. He looked me directly in the eye and firmly challenged: “Mr. Martell, you don’t have to sell drugs to your community. Be a CEO of a Fortune 500 company instead of out here selling drugs.”

I walked out of that courtroom determined to prove to myself and the judge that I was so much better than my worst days. I spent the first few months working entry-level general labor positions elbow-to-elbow with other felons. There I found myself, along with my convicted colleagues, exploited for labor based upon our situation.

In 2008, I turned my pain into passion and mustered up the courage and confidence to enroll in Wayne County Community College. At that time, I was just a felon with a dream. I’ll never forget how I was directed to heating and cooling courses based on my record. But after insisting, I was allowed to enroll in prerequisites for the paralegal studies program.

In 2014, I graduated with a bachelor’s degree in political science and certificates in prelaw and Spanish. In fall 2014, I was accepted on a full academic scholarship to the University of Detroit Mercy School of Law. In my first year, I was elected 1L evening class president. In my second, I was awarded the Voice for Justice Award for my commitment to public service. I was selected for a clerkship with the Office of Public Defense Services. There, I honed my legal skills and set my mind and focus on public defense.

That path changed in my last year of law school when I had a chance encounter with prominent Detroit criminal defense attorney Todd Russell Perkins of the Perkins Law Group. Perkins, also a UDM Law alum and a native Detroiter, was a guest speaker at a class lecture when I approached him and inquired about joining PLG. After a brief conversation, I was invited for an interview, which later led to my being hired as a legal writer at the firm.

In May 2018, 25 years after dropping out of high school, I received my JD. This is where the real battle began. To practice law in the state of Michigan, in addition to graduating from law school and passing the bar exam, applicants must prove that they possess requisite good moral character to practice law.

After a thorough character and fitness hearing and review, I was found to have the requisite character to practice, and in February 2021, I sat for the Michigan bar exam. Three months later, I received my results. The sound of accomplishment and the breaking of glass ceilings rang through our firm.

We celebrated as a team and a family. On May 14, 2021, I was sworn into the practice of law by the same judge who spared me: the Honorable Bruce Morrow in Courtroom 404 at the Frank Murphy Hall of Justice, the same courtroom where I was sentenced.

Upon admission to the bar, I accepted an associate position practicing criminal law with the Perkins Law Group.

Last words: It’s never too late—turn your pain into passion, pursue your purpose and let your liability be your asset.

This story was originally published in the October/November 2021 issue of the ABA Journal under the headline: “From Defendant to Attorney.”

Ed Martell practices law with the Perkins Law Group in Detroit where he specializes in criminal defense work.