NAACP's Sherrilyn Ifill: Lawyers must step up in cop-shootings crisis 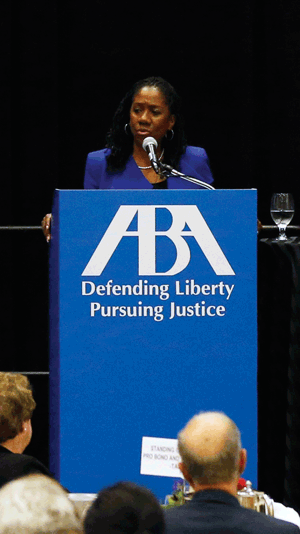 The seemingly constant stream of new videos and other reports of African-Americans being shot by police under questionable circumstances is creating a crisis of confidence in the rule of law, said Sherrilyn Ifill at a luncheon gathering for the Pro Bono Publico Awards.

“When large segments of the population no longer believe in the integrity and legitimacy of the rule of law, it is a threat to our democracy,” said Ifill, president and director-counsel of the NAACP Legal Defense and Educational Fund, in her keynote address.

Ifill said she leads an organization that worked to end segregation and to secure full rights for all. But “this is a moment where people like me will start to have no credibility with people who I have devoted my life to represent.”

In this moment of crisis, lawyers should be leaders and work for solutions, Ifill said.

“We’re compelled not only to use our time and skills to step up our pro bono commitment, but it’s time we start shaming our friends who aren’t stepping up.”

Ifill provided a story about her first exposure in developing an understanding of law enforcement and the relationship with the black community.

When she was 10 years old growing up in New York City, two police officers got out of their car and started chasing a man and his 10-year-old son who were out walking on a Saturday morning. An officer shot and killed the boy and said he thought the father and son were robbery suspects. Although it was more than 40 years ago, Ifill remembers details such as the image of the New York Daily News on a table at home with a story about the shooting; and she remembered the officer’slast name.

The officer was indicted and then acquitted by a jury that had only one black member.

“The point of the story is these issues have been going on for a very long time,” Ifill said. Black people were not believed when they described such incidents. But now there are videos, “and you can’t avoid the truth.”

This article originally appeared in the October 2016 issue of the ABA Journal with this headline: “NAACP’s Ifill: Lawyers must step up in cop-shootings crisis.”