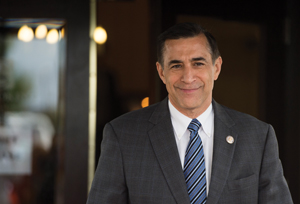 Rep. Darrell Issa insists that the Innovation Act “will not be watered down.” AP Photo

It is a rare instance of bipartisan consensus. Democrats and Republicans in Congress agree that "patent trolls" are using dubious infringement claims to pressure others to purchase patent licenses, thus extorting millions of dollars annually from businesses large and small across the U.S. The trolls are a threat to both America's economy and its ability to innovate, according to many legislators.

So it was no surprise when, on Feb. 5, Rep. Darrell E. Issa, R-Calif., chair of the House Intellectual Property Subcommittee, introduced the Innovation Act. This anti-troll legislation would make important changes in patent law, such as toughening the requirements for infringement complaints, delaying discovery until after claim construction rulings, allowing manufacturers to intervene in infringement suits brought against their products' end-users, and significantly increasing the risk that the losing party in an infringement suit must pay the winner's legal fees.

"This is the most significant bipartisan patent bill that we've seen in Congress for years," says Scott F. Partridge, a partner in the Houston office of Baker Botts and a council member of the ABA Section of Intellectual Property Law.

The Innovation Act is identical to a bill Issa sponsored last congressional term. The earlier bill easily passed the House of Representatives but was never considered by the Democrat-controlled Senate. Now that the GOP controls both wings of Congress, many observers predict that the current Innovation Act will become law this term. Other experts are more doubtful, noting that although the bill is popular on the Hill, many provisions are drawing fire from prominent legal experts, including the Intellectual Property Law Section and the association itself.

One of the most contentious parts of the Innovation Act is its requirement for more specificity in patent infringement complaints. Currently, many courts allow such complaints to contain just the information specified by the complaint for patent infringement, Civil Form 18: the number of the allegedly infringed patent, the date such patent issued, a cursory description of the patented invention (e.g., an electric motor), and an assertion that the defendant is infringing the patent. The complaint needs no additional details about the alleged infringement.

This allows patent trolls to issue infringement threats against businesses without spending time and money to determine whether any one of these businesses has actually infringed.

The complaint's vagueness puts the full burden of investigation onto alleged infringers. They must pay for legal counsel to review the allegedly infringed patent and determine how the patent claims apply to the defendants' goods/services. Many small businesses cannot afford that.

Even more costly is when an alleged infringer wants to dispute a troll's infringement claim. These suits can last for years, with average legal fees running from $600,000 (for suits seeking less than $1 million in damages) to $5.5 million (for suits asserting more than $25 million in damages), according to a 2013 report by the American Intellectual Property Law Association. On top of those costs, a defendant could be held liable for infringement and forced to pay hefty damages. Rather than risk all that, many alleged infringers just pay off trolls.

The Innovation Act aims to change all this, in part by making it harder and more expensive for trolls to file infringement complaints. The legislation would abolish Civil Form 18. Every infringement complaint (and counterclaim) would need to provide detailed information about the alleged infringement, including: what specific claims in a patent are allegedly infringed, what specific goods/services allegedly infringe these claims, and how each accused good/service meets each limitation of each asserted patent claim. Required details may be omitted only if the patentee cannot obtain the necessary information after reasonable effort. The act adds that the Judicial Conference should recommend an appropriate new-form patent infringement complaint.

Some experts laud this proposed tightening of pleading requirements. "Patent litigation has been an outlier on pleading standards. In other areas of law, those bringing a lawsuit need to establish that they have an appropriate level of information to drag someone to the courthouse," says Robin Feldman, a professor at the University of California's Hastings College of the Law in San Francisco. "It is time to bring patent lawsuits into conformity with other types of civil litigation."

Others oppose tougher standards for pleading patent infringement. "I am concerned this would needlessly increase the cost of patent litigation for all participants. The more detail you require in a complaint, the greater likelihood of increased motions to dismiss and of further delay in obtaining a speedy and just result," says Robert O. Lindefjeld, general counsel of Nantero Inc. in Pittsburgh. He is also a past president of the IP Law Section.

The ABA has opposed the Innovation Act's pleading provision, but for a different reason. In a February 2014 letter to the top Democratic and Republican members of the Senate Judiciary Committee, the director of the ABA's Governmental Affairs Office, Thomas M. Susman, explained that the ABA was unhappy that, under the earlier Innovation Act, pleading requirements would be set by Congress—not the courts. Because the 2013 Innovation Act is identical to the current bill, the ABA's critique would apply also to the current legislation.

The ABA may face an uphill fight. Rep. Issa seems determined to keep this provision intact. "The most critical element under the Innovation Act is heightened pleading. It will not be watered down," Issa stated at a Feb. 11 conference.

Another important and controversial measure would dramatically alter the standard for fee shifting in patent litigation. Currently, U.S. courts apply the "American rule," in which each side in a lawsuit pays its own legal fees. In exceptional circumstances, the losing side pays the winner's expenses.

The Innovation Act would reverse this standard. The act requires fee shifting in patent litigation unless the court finds that the nonprevailing party or parties were reasonably justified or that special circumstances (such as severe economic hardship to a named inventor) make an award unjust.

Supporters assert that it will force patent trolls to think twice before asserting dubious infringement claims. Moreover, this provision will empower those wrongfully accused of infringement to fight back, knowing they may not have to bear the cost of defending themselves.

Opponents argue it is inappropriate to create a special fee-shifting rule for patent litigation. "Through-out all of U.S. legal jurisprudence, the rule is that each party pays its own attorney fees. This would reverse the rule in just one small area of the law," says Dale Lazar, a partner in the D.C. office of DLA Piper. He adds, "The Supreme Court has been trying to make patent law more like other areas of law, but this provision would push it in a very different direction."

The IP Law Section has opposed the provision on another basis: It would discourage not only dubious suits brought by patent trolls, but many reasonable suits filed by inventors and businesses. Issa seems determined to push the Innovation Act through the House. "I inherited a bill with broad bipartisan support," he said in February, "and I have no intention of watering it down."

This article originally appeared in the June 2015 issue of the ABA Journal with this headline: “Tightening Up: New Innovation Act, aimed at 'patent trolls,' would require more details in infringement complaints.”