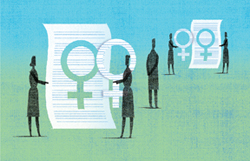 More than 50 law professors and lawyers are collaborating to analyze how U.S. Supreme Court jurisprudence would look if seminal cases had been adjudicated from a feminist perspective. The book Feminist Judgments: Rewritten Opinions of the United States Supreme Court will contain 24 rewritten decisions on topics such as reproductive rights and substantive due process to show how feminist legal reasoning might actually change the course of law.

Inspired by the 2010 publication of a similar study in Britain, Feminist Judgments pioneers a new form of critical socio-legal scholarship in the U.S. The rewritten decisions will use the same precedent that bound the Supreme Court at the time of each case but will incorporate a feminist perspective on the facts and the law. The book aims to prove that stare decisis can mask what is really a masculine viewpoint, and that hidden gender bias—not stare decisis—may be what drives the reasoning and results in much of the nation's jurisprudence.

More than 100 people applied to contribute to the project, says Temple University Beasley School of Law professor Kathryn Stanchi, one of the project's three editors. Some contributors will rewrite the selected opinions and others will write commentary that will provide historical and nonlegal context to the decisions. "It'll be a collaboration between master theorists and people firmly grounded in the practical," including practitioners, legal writers and legal theorists—all from both genders, she says. "We were very, very mindful that feminism is a big tent, and there's room for everyone."

According to co-editor Bridget Crawford, a Pace Law School professor, the project is "more than a purely academic exercise," and the intended audience is broadly defined to include mainstream lay readers. "I can't think of another volume with 50 contributors," Crawford adds. "For those who say we're in a post-feminist era, I say feminism remains front and center. This book is a testament to that."

The project should be completed by year-end.

This article originally appeared in the February 2015 issue of the ABA Journal with this headline: "A Different View: New project rewrites SCOTUS opinions from a feminist perspective."