Columnist David Pogue shocked his father, a managing partner of what was once Jones, Day, Reavis & Pogue, with the announcement that he would not be attending law school.

While he may have eschewed his lawyerly roots (Pogue’s grandfather was an aviation attorney), the Emmy-winning New York Times technology correspondent charmed ABA Techshow attendees in a charismatic keynote address that included a piano, songs and oodles of tips on coping in an era dominated by the prolific use of personal tech devices.

“It’s a joke these things are called phones—they are so much more,” Pogue said as he quickly moved through a rundown of the latest tech developments, with the greatest innovations taking place on our handheld smartphones and tablets. The speech wasn’t exactly directed to an audience of lawyers, but it was certainly entertaining. 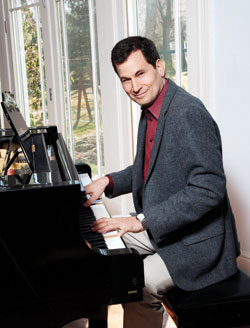 Pogue emphasized the global impact of user-friendly apps that allow people to interact and add their own content, such as the mobile apps from Facebook, YouTube and Wikipedia—the latter of which was found in a study to be about 2 percent more correct than the Encyclopædia Britannica.

“The next big wave in tech will be augmented reality,” Pogue said. These devices and apps will include phones and glasses with perpetual video cameras that see the world as users do, but superimpose text data over the images they’re viewing. Imagine an app that has facial recognition abilities and can pull all social media activity of a person who steps into the view of the camera’s lens. It exists.

One of Pogue’s favorites is a $5 app called WordLens that allows users to hover their phone camera over signs, menus or any written text and get an accurate translation in real time on their phone screen.

Pogue ended with wry observations of younger generations who are constant multitaskers and seekers of immediate gratification, and who pay lip service to privacy. The next generation, he noted, thinks voice mail and email are obsolete and have been replaced by the instant communication of texts and social media like Twitter and Facebook.

“We need to teach them ethics of the online world; we need to teach permanence and credibility,” Pogue warned the roomful of attendees. As advisers to a generation that will adopt new technology at a faster pace than any that came before it, he said, trusted guidance will be in full demand.

With that, Pogue closed with a song pitting the Recording Industry Association of America against high schoolers who download and share music off the Web.