Hector—Rescued in 2007 from NFL Quarterback Michael Vick’s dogfighting operation—is shown with owner/trainer Roo Yori at a middle school where they are teaching children how to safely interact with animals.

What happens when a city bans pit bulls and a disabled resident has a pit bull service dog?

City officials in Denver and in the neighboring suburb of Aurora are being sued over their enforcement of dog breed bans. The suit claims the bans violate the Americans with Disabilities Act.

Aurora resident and Vietnam veteran Allen Grider is one of the litigants. He suffers from post-traumatic stress disorder and claims his 8-year-old trained service dog, Precious, is essential in helping him cope with his disability. “I’m a combat vet, so I have fears,” Grider says. “She takes that away from me. I need her pretty bad.”

Though city officials eventually returned Precious to Grider, the reunion came with restrictions, including muzzling the dog in public. 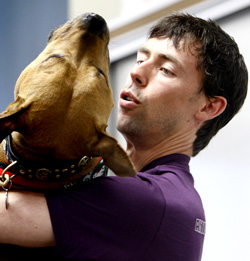 Grider and his lawyer, Jennifer Reba Edwards, say that the restrictions make it impossible for Precious to work as a service dog, and that they violate the ADA.

The suit comes at an interesting time. Last summer, which coincided with the 20th anniversary of the Americans with Disabilities Act, the U.S. Department of Justice issued final rules regarding banned-breed service dogs. The rules, which took effect in March, prohibit dogs being banned as service dogs because of their breed.

The two cities continue to argue that, despite the final rules, their breed restrictions as applied to the plaintiffs don’t violate the ADA.

City attorneys from Denver and Aurora declined to comment for this article, but in a nod to the lawsuit’s significance, both jurisdictions have begun to reconsider their dog breed bans.

In April, Denver announced that it would retreat on its policy of impounding pit bulls identified as service animals by their owners, according to the city’s director of animal care and control, Doug Kelley. In May, Aurora passed an ordinance that relaxed some restrictions on the use of pit bulls as service dogs. However, the ordinance does maintain other restrictions, such as requiring pit bulls to be kept behind secure fences when in a yard.

Valparaiso University law professor Rebecca Huss, who co-chairs the subcommittee on companion animals of the ABA Tort Trial and Insurance Practice Section’s Animal Law Committee, says it’s not clear how these changes will affect the jurisdictions’ compliance with the rules. Some of the provisions—like Aurora’s fencing requirement—are “likely to still be potentially problematic,” she says.

Huss knows of no other cases like Grider’s, but says that other jurisdictions have dealt with the issue of pit bulls as service dogs under the ADA by simply exempting service dogs from breed restrictions.

Edwards commends the changes in the laws in Denver and Aurora, but she says she intends to proceed with the lawsuit until she’s convinced her clients may use their service dogs without cumbersome restrictions and without the fear that the dogs may be taken away by an overzealous animal control officer. And they aren’t quite there yet.

“We would need the law changed, or a permanent injunction put into place so that these restrictions cannot be upheld or enforced against people with service animals,” she says.

Grider, too, isn’t comfortable. “I feel it’s coming along, but I still don’t trust them,” he says. “They say [Precious is] vicious, but she ain’t. They don’t need to ban nothing. They got the vicious animal law on the books.”