One of Clarence Darrow's Letters to His Granddaughter Jessie 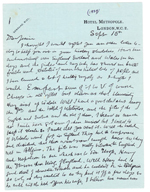 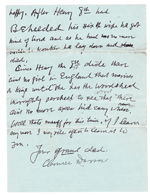 I would have written you sooner but you hav ben in Colligeville so long and go so smart that I thot a letter to you shud have some information which would be out of plac with yor rufneck sisters who don’t want to no much but movy stuff. I feal that it is mi duty to help edgeukate you so you will be smart like me.

I am now in London as you can tell from the statinerry. London is in England which is one of the British ilands in the west part of Europe which is a country in the Atlantic Oshun which was discovered by ritch Americans where they could spend there munny. It is a big town, in fact the biggest in the world if you don’t count New York including New Jersy and Philadelphia. There are houses and stores and streetcars and everything hear. The people talk English which is something lik our language but not mutch. It is in the river Tems which is a big river with water and botes and smells in it like the Chicago river. The Tems runs to the English Channell and flows way back in the north of England some where. I havn’t had time to find out but wil let you no as sun as I can explor it sum more. The British ilands is composed of England, Scotland, Wales and Ireland. Ireland is a part of it but is always trying to get away but can’t because the water is so deap. England is inhabited by English men. Scotland is settled by the Scotch, Wales is occupied by the Welsh and Ireland by the Irish. They do not hav prohibition over here which I have seen by going around the town. Shaksper was born in England in Stratford on the Avon river. He rote some plays and a few poems which ain’t fit to rede so you had better get them. He was ded when I got here. The Avon river runs threw Stratford and sum other places which is about the size of Greeley or Nun, but greener than either of them, but not so green as the people that live there. The Scotch et oatmeal. There are no snakes in Ireland but there is whisky so they don’t kneed snakes as they can see them even if thay ain’t there. Ireland is about fifty miles away from the English coast (maybe more) but you can hear them all rite when they are having a selebration on St. Patricks day. St. Patrick drove the snakes out of Ireland but I don’t think they would of staid if he hadn’t drov them out. The capital of Ireland is Doubling, that is the reason it is so big. The capital of Scotland is Edinburg. It is on a hi hill and is closed up tighter than a drum on Sundy. They are religious in Scotland

and every drunk person goes offen the street at twelve o’clock on Saturdy nite and gets ready for church. The Scotch are very stingy. Harry Lauder is the king of Scotland. He sings in the coffee shops wher they don’t drink coffee. Coolige was not president of Gt. Brittain, only of the U.S. but his time is out now so he don’t do eneything but live in Cooligeville and save his money. He is supposed to be a rich man and saved $74,000 a year out of his salary. He spent all of the rest, but I don’t know eneything about it myself just what I have herd.

When the theaters is out in London they play a tune called God Save the King and they all stand up. The king was sick a while ago and God and sum doctors cured him. That is why they play God Save the King. He has a son which is called the Prince of Whales and when God and the doctors gets thru saving the king the prince automatically gets to be king and than when he gets the thron the tune means God Save the Prince of Whales. The king was Prince of Whales once and they used to play the tune for his father who was king but it didn’t save him very long, not near so long as his mother—Queen Victoria. While she was queen they played God Save the Queen but it was just the same tune but the words was a little different. They put in “her” instead of “him” but that was about awl the difference.

The British is mainly inhabited in the summer time by rich Americans who get their munny changed from dollars to pounds and shillings and pence which go about as far as a snowball but not mutch farther. The mane business of the Americans is going up to the American Express Co. and Cooks to get more munny and letters from home. They get up late in the morning and eat some coffey and rolls and then go and get some more munny and sum letters and red them in the hotel and then it is time for lunch which is a little more than brekfast. Then after they ete their lunch they go up to Trafalgar Square where there are four big lions made of stone and a big statue as hie as a flagpole and a bust of Lord Nelson on the top. The reason the monument is so hie is so the lions can’t eat Lord Nelson up, nor down. Lord Nelson was a sailer and fought sum bettels and so they put him up there and he has been there ever since. I first came to Lunden thirty-five years ago. He looks like he had never moved. I should think he would get tired standing there, especially in the winter time when it is cold and foggy in England. Well after the Americans get thru looking at Nelson and the lions they come back to the hotel and drink tea, about four o’clock. Everybody in England drinks tea at four o’clock because the English do. Then after tea they go into the stores and look for presents to take back home but they can’t find anything they want and if they do it costs so much that they don’t by it. Once in a while a lady bies a pocket book to carry in her hand, but after she pays for it she don’t have any money to put into it and so she mite just as well of saved her money. Today is a tag day so I am keepin offen the street. An English penny ways about a pound but you don’t half to carry it very long. Maybee I will bring you one when I come back so you will learn some more about the world. I think it would be better than to bye you something you don’t kneed and then if you ever come to Englund you will have money to spend.

The Atlantic Ocean is west of England and is quite wide and if it wasn’t all the Americans would be over here. The English Channel is south and west of England. It was put there to keep the French away. It is full of fish; fuller than any other water so they say. I have been trying to find out why there are so many fishes in the English Channel. Well I have figured it out. There are more ships here than any where else, the people in Europe are always coming here, and the people of England and America always going to the continent and the water is awful ruff and the botes are small so everybody gets sea sick and that makes good picking for the fishes. You can see the people on the botes hanging over the railings and looking down but they haint looking at the water. I fed sum of them fishes myself. I am told that all the fishes in the oceans no about the English Channel and come from every ocean to get fed. The fishes teach this in their schools. I don’t no as anyone else has ever figered out the reson but me but I will tell them sum time. I am quite a fellow for figgerin out things.

I forgotten to tell you that the kings name is George. I don’t know what his other name is. They just call him George like some people do the waiters in the restaurants. If there is enny thing to do they let him do it.

Well I gess this is about awl you can digest this time. When I find out sum more things I will rite you about them. There is lots of ways to learn things besides going to Collidgeville.