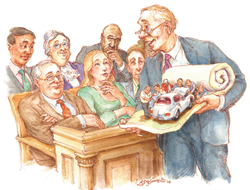 The bar association dragooned angus and Judge Standwell into doing another Wednesday evening CLE series—this one on persuasion. The first topic was “organizing the case.”

Professor Vince Warbler, who teaches commercial litigation at the law school, came to the podium uninvited and gave a 12-minute introduction to the program. He ended by saying, “I’m sure we’ll all have some interest in the speakers’ thoughts on how organization can have some tangential influence on the primary job of arguing a case to a judge and jury.”

Judge Standwell had drawn the short straw, so he went first. “Thank you, professor,” he said. “I don’t think anyone could have done a better job of highlighting the most important idea that runs throughout effective persuasion.

“This is the key,” Judge Standwell said as he walked over to the big white board on the dais and wrote: People like their own ideas.

“Let that sink in for a second,” he said. “It means the more you argue—the harder you push, the more you tell the judge and jury how to think—the less effective you will be.

“Yet this counterproductive ‘telling the judge and jury how to think’ seems to be just what some professors are teaching in law school these days.

“The problem is, people resent being told how to think. Characterization is the enemy of persuasion. The key to effective advocacy—like good writing—is ‘show, don’t tell.’ ”

Ernie Romero raised his hand and said, “You always hear that, but what does it mean?”

“I saw this example of ‘telling’ in a Baltimore trial just two weeks ago,” said Angus. “The plaintiff’s law­yer started his opening statement by saying, ‘This is a shocking case of outrageous corporate greed by a totally irresponsible American automobile manufacturer acting in wanton, willful disregard of the safety and security of the American driving public and their need for properly designed, reliable, crashworthy automobiles.’

“He went on like that for five more minutes, and the jurors’ eyes were all glazed over before the lawyer talked about any facts in the case.”

“The opening statement is a story,” said Judge Stand­well. “Don’t even talk about it as an opening ‘argument,’ lest the very name lead you to do just that.”

I looked around just in time to see Professor Warbler slipping out the side door.

“So how do you organize your opening so that it shows instead of tells?” said Standwell. “First decide what stays in and what comes out.”

“Clear out all the clutter,” said Angus. “Both unnecessary issues and needless words. Never start an opening by saying, ‘My name is Martin Garcia, and at this point in the proceedings it is my job to give you ladies and gentlemen what we lawyers call an opening statement. But before I start, please understand that nothing I say in this case—and nothing that is said by the defense counsel, Ms. Rawlings—is evidence. It’s just lawyers’ talk. The only thing that will justify a verdict by you is the testimony that you hear from the sworn witnesses and the exhibits admitted into evidence by his honor, Judge Mudrock.’ ”

“That’s not just clutter,” said Judge Standwell. “It undermines everything you say. Just because you hear other lawyers say it doesn’t mean you should.”

“Exactly,” said Angus. “Tell the story of the case—not the story of the trial. Tell what happened, not who you’re going to call to the stand or what they’re going to say. Not only is going through the witness list tedium that does nothing to help your case, but if you later decide not to call one of those witnesses or not to cover something you talked about in your opening, it invites your opponent to point out all your broken promises.”

“So how do you possibly tell the whole story of a case in the 30 minutes the judge typically gives you?” asked Maria Archuleta.

“And don’t take the whole 30 minutes,” said Angus. “As federal District Judge Tom Marten of Wich­ita, Kan., says, ‘The job of the lawyer in the opening is not to tell the whole story. It’s to set out a hook that will make the jury want to hear the details they’ll use to fill in the blanks during the rest of the trial.’ ”

“Great goal,” said Sandy Ramirez, “but how do you set out a hook that does all that?”

“One way is to start at the end,” said Judge Stand­well, “with a short setting followed by a series of questions. Here’s one I heard years ago:

“There’s a tall, white building downtown on Indian School Road. Every morning at 8:15 a city bus stops in front and a woman wearing a plain cloth coat gets off the bus. She goes inside the building and takes the elevator to the eighth floor.

“She walks to the end of the hall and stops at a closed door.

“She knocks on the door, but no one hears it.

“She opens the door and turns on the light, but the man in the bed doesn’t see it.

“She walks over to the window and opens the cur­tain, but the man doesn’t notice.

“She kisses him on the forehead, but he doesn’t feel it.

“She sits next to the bed and takes his hand, but he doesn’t react.

“She tells him how the children are doing in school and what is going on in the neighborhood, but he doesn’t respond.

“She says a little prayer and kisses him goodbye, but he doesn’t move or even smile.

“Then she leaves the room, goes down the elevator, out of the building and walks to work.

“Who is this man?

“How did he get that way? Who is responsible for it?

“That’s what this case is all about.”

“Great stuff for the plaintiff,” said Barbara Swanson. “I was drawn into helping make the hook by realizing the white building must be a hospital and the man’s condition is really precarious. But what can a defense lawyer do after an opening that starts like that?”

“Call the defendant’s insurance carrier and tell them to increase their reserves,” said Flash Magruder, the plaintiffs lawyer.

“Pop the bubble,” said Angus. “And one of the most effective ways is to borrow a phrase from legendary radio announcer Paul Harvey: Ladies and gentlemen, you know there is more to this case than what you just heard from Mr. Reynolds. And because he left out some very important facts, it’s my job to give you what’s called ‘the rest of the story.’ ”

THE VALUE OF A QUARTER

“Another bubble-popper is called ‘the allow­­ance,’ ” said Judge Standwell. “See this 25-cent piece, ladies and gentlemen? When I was 10 years old, it was my weekly allowance, for which I had to walk the dog, mow the lawn in the summer, shovel the walk in the winter and take out the garbage every Tuesday morning.

“It looked awful big when I was 10. With it, I could get in the Saturday matinee at the local movie theater and have enough left over to buy a small Coke and a nickel bag of popcorn.

“It’s still the same size, but it won’t even buy a candy bar anymore. But no matter how much it buys, it has two sides—just like this case.”

“Good grief,” said Ernie Romero. “In less than 30 seconds, I knew that Judge Standwell was not some fancy lawyer like all the others hanging around the courthouse, but a real person. I wanted to hear the rest of the story.”

“Now some ideas for how to put the rest of the case together,” said Angus.

“Injustice has the power to stir people’s blood. It’s not how good you are, but how bad they are.

“Don’t start with the sympathy card. Make them mad at the other side first.

“Put your concessions in the middle. You’ve got to make them, but you don’t need to put them first or last.

“Real people don’t organize their ideas around elements of a cause of action. Neither should you.

“Take the jury to the scene with ‘visual questions.’ They evoke ‘visual answers.’

“Have two ways of proving every essential fact in your case. You don’t have to use both, but the second one is there if you need it.

“Your case is judged by its weakest points. Better to have two or three good ones than a bushel of mediocrity.

“Steal your opponent’s thunder—challenge your own witnesses. Questioning your own evidence reinforces your credibility and the integrity of your case.

“End strong. Leave them wanting more rather than know­ing they’ve had too much.”

Jim McElhaney is the Baker and Hostetler Distinguished Scholar in Trial Practice at Case Western Reserve Univer­sity School of Law in Cleveland and the Joseph C. Hutcheson Distinguished Lecturer in Trial Advocacy at South Texas College of Law in Houston. He is a senior editor and columnist for Liti­gation, the journal of the ABA Section of Litigation.