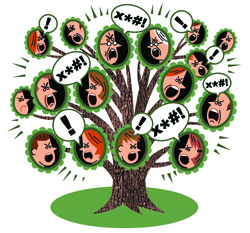 Sometimes there’s a lot of baggage when families get together—and not the kind with handles. And it’s not easy, or particularly pleasant, when families have squared off against each other in a court of law.

But in its never-ending quest for awkward Thanksgiving gatherings, the American family has made some impressive strides lately. Just imagine passing the cranberries and sweet potatoes with any of the following scenarios in your recent past.

Frosty dinner conversation is all but guaranteed for Salvatore and Patricia Piazza, who own Piazza’s Ice Cream & Ice House, a distribution business on Staten Island. They made their son, Nicholas, the company’s vice president. Nicholas, dissatisfied with what he considered low pay and long hours, complained to his parents and claims he was fired as a result. He then bought a truck and allegedly began to lure customers away from his parents’ business. They sued him in May, seeking a permanent injunction and $500,000 in damages.

Nicholas answered with a lawsuit of his own in July, claiming that he was illegally denied overtime pay and demanding $100,000 in damages.

“Do you believe a son would put a knife in his father’s back like this?” said Salvatore to the New York Post. “He tried to sabotage our business.”

Let’s hope the pumpkin pie will not be served at the Piazza household with a scoop of ice cream on top.

Another way to sow discord within a family is to play favorites. Usually this is perceived as the parents’ preference for one sibling over the other(s). But a Reno, Nev., family gave the concept a new twist.

Marie Liapis decided to file for divorce from her husband, Theodore, seeking a property split and spousal support. Theodore didn’t have to go far to find a lawyer to represent him against his wife: He retained their son, Mark.

Marie initially succeeded in having her son disqualified, claiming that his “pecuniary interest in their estate created an appearance of impropriety,” and that he could not be a zealous advocate if “he professes to still love both his parents.”

But in August the Supreme Court of Nevada gave Mark the go-ahead to represent Dad, though Mark might want to bring Mom an extra-large horn-of-plenty centerpiece this year to help smooth things over.

And small talk could be hard to come by if the family of Olympic gold medalist Tianna Madison convenes to observe the late-November turkeyfest. It seems that Tianna has issues with the way her parents have managed her finances, and she claims that a boy who allegedly molested her was allowed into the family home in her presence.

Her parents—Robert and Jo Ann Madison of Elyria, Ohio—might have been willing to simply sit and discuss Tianna’s concerns were it not for the fact that she made the statements to a number of news outlets. So instead, they felt compelled to file a lawsuit in the Cuyahoga County Court of Common Pleas in September, alleging that Tianna’s statements are false and defamatory, and have caused them “humiliation, public ridicule, mental pain and anguish.”

While mental pain and anguish might be frequent byproducts of familial disputes, we should all give thanks that at least once a year some of them can be mitigated by tryptophan.