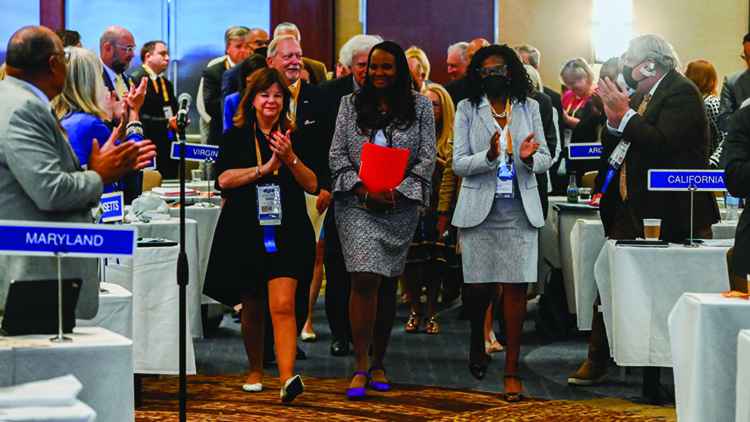 Reginald Turner is not giving up hope.

“After a year of continued and seemingly insurmountable division in our country, the increasing embrace of the notion that violence is an acceptable way to resolve differences and government actions that many experience as attacks on life and liberty, I have not wavered in my belief of a rising sun on the rule of law in America,” he told the House of Delegates at the 2022 ABA Annual Meeting in Chicago, his last event as president of the association.

Turner, an executive committee member of Clark Hill in Detroit, said various ABA offerings affirm hope. His remarks acknowledged the Coordinating Group on Practice Forward, which provides practical tools and resources to help navigate the legal profession as it transitions beyond COVID-19, as well as the Standing Committee on the Federal Judiciary.

He also spoke of the ABA’s engagement with partners in Ukraine and work to help Afghan refugees.

Additionally, Turner spoke about ABA diversity pipeline offerings, including a judicial clerkship program. He noted that he served as a judicial clerk for former Michigan Supreme Court Justice Dennis Archer, who in 2003 became the first Black president of the ABA. Turner still considers Archer a mentor today.

“I ask you to reflect on the mentors who have brought you to this point, along with those you have mentored. I ask you to reflect your own commitment to welcoming new, diverse generations of lawyers—smart, eager and dedicated individuals who see a career in law as a higher calling to achieve justice for all under the rule of law,” Turner said.

And as he did when his term as president started, Turner spoke of Focus: Hope, a cultural exchange program between city and suburban residents that started shortly after the 1967 Detroit riots. Turner, the child of a Detroit police officer and a library aide, said his parents signed the family up for Focus: Hope because they were looking for ways to heal from the unrest.

“Please hold fast to that 7-year-old boy from Detroit as you see the sun rise on the rule of law,” said Turner, pausing briefly as his voice cracked. “And focus, always focus, on hope.”

After accepting the gavel from Turner to serve as president of the ABA for the 2022-2023 term, Deborah Enix-Ross told the audience she plans to focus on the “three Cs”: civics, civility and collaboration.

“You know that song ‘I’m Bringing Sexy Back’? Well, I’m bringing civility back,” Enix-Ross told the House to laughter and applause.

People’s differences are aggravated by incivility in public discourse and a lack of understanding of civics, she added.

“We, of all professions, appreciate that though our differences may be stark, we know how to work together and resolve them. We know how to agree to disagree,” said Enix-Ross, senior adviser to the International Dispute Resolution Group at Debevoise & Plimpton. “Lawyers can model the behavior we wish to see, and the ABA has the resources and ability to embrace this role.”

Enix-Ross’ recent work with the ABA includes establishing the Law, Society and the Judiciary Task Force with Turner. The group will recommend ways to educate the public about the judiciary and the importance of protecting the branch’s integrity, she said.

Additionally, Enix-Ross plans to continue the ABA’s work in fostering diversity and inclusion. Also noted was the Poll Worker, Esq., initiative, which was created by the ABA Standing Committee on Election Law to encourage lawyers and law students to serve as poll workers.

“We are at our best when we demonstrate goodwill, tolerance for differing viewpoints and a deep, shared concern for the rule of law,” she added.

Enix-Ross ended her speech with “a blessing and a challenge,” with words often attributed to John Wesley, founder of the Methodist church.

‘We lift lawyers up’

Mary Smith, vice chair of the VENG Group, a national government relations and public affairs firm in Chicago, officially became the president-elect at the close of the annual meeting. Enix-Ross will pass the gavel to Smith at the 2023 ABA Annual Meeting in Denver.

“We are at an inflection point for our country and our association,” Smith told House members.

She recalled a story about Benjamin Franklin being asked after a session of the Constitutional Convention in 1787, “What kind of a government have you given us?” He replied, “A republic, if you can keep it.”

“Our republic is founded on core principles that include the rule of law, faith in our system of justice, and free and fair elections,” said Smith, who added that lawyers have unique skills and a special role to play in keeping democracy alive.

“As lawyers, we must counter the notion that the threats to our democracy are a political issue,” she said. “Let me be clear: They are not. The rule of law, the integrity of a fundamental right to vote and protecting the independence of the judiciary will always be our special responsibility. So, too, is the importance of civil discourse.”

Smith, an enrolled member of the Cherokee Nation, will be the first female Native American president of the association.

She served as ABA secretary from 2017 to 2020 and on the ABA Board of Governors for seven years. She was also a member of the House of Delegates and has been active in the Section of Litigation, the Commission on Women in the Profession and what is now the Section of Civil Rights and Social Justice.

Smith told House members she is inspired every day by the work of her colleagues to support the ABA’s four goals.

“We lift people up,” Smith said. “We lift lawyers up. We lift the legal profession up. And we cannot let ourselves be distracted by detractors. We can and must do more.”