Plaintiffs in California asbestos cases feel they're being questioned to death 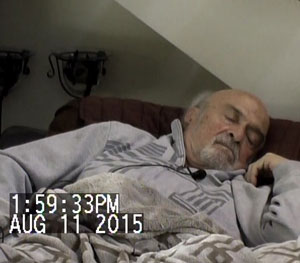 Grainy video shot last August shows 75-year-old Nader Kordestani lying in a padded recliner at his home in Calabasas, California, near Los Angeles. Off camera, a defense lawyer asks him whether it's true his health is failing.

Dressed in a gray sweater and covered with a blanket, Kordestani replies in a stilted voice: “That’s correct. I am, believe me, I am dying. I’m not in good shape. I am not going to survive.”

For more than three hours, Kordestani responds to questions between labored breaths and hacking coughs, his eyes at times struggling to stay open. Lawyers argue as the Iranian immigrant is peppered with questions, many repetitive, about events that happened decades earlier.

It is not Kordestani’s first time being deposed while suffering from mesothelioma, a rare and aggressive cancer linked to asbestos. A roomful of lawyers questioned him for more than 17 hours over 18 days in 2013. That year, Kordestani had sued 50 corporations for allegedly exposing him to the fiber while he worked at an Iranian oil refinery, starting in the 1960s. The refinery was built, in part, by American companies, which is why he’s suing in the United States.

The arduous and antagonistic process puts a heavy strain on mesothelioma patients typically given months to live after diagnosis and simultaneously undergoing harsh therapies such as radiation. Situations like Kordestani’s raise a thorny question: How much is too much?

Plaintiffs lawyer Jeffrey Simon, who is licensed to practice in California, New York and Texas, says lengthy depositions have only been an issue in the Golden State. “I do not think that it is appropriate to depose a dying plaintiff for days on end,” says the founding shareholder of Simon Greenstone Panatier Bartlett, based in Dallas. “That’s every day in California.”

In 2015, his firm handled three California cases in which plaintiffs were deposed for, respectively, 21 hours over six days, 36 hours over 10 days and 48 hours over 21 days. Simon and other plaintiffs lawyers call the drawn-out depositions a stalling technique meant to run out the clock or harass sick clients into dismissing claims. In California, clients must be alive during trial to claim damages for pain and suffering.

Defense lawyers counter that detailed depositions enable companies to adequately defend themselves when millions of dollars are at stake in plaintiff-friendly jurisdictions such as California. Mesothelioma settlements, the lawyers say, can range from $1 million to $5 million, with the success of cases often centered on whether plaintiffs can positively identify exposures to specific asbestos-containing materials.

California’s rules on damages, coupled with high standards for case dismissal, give plaintiffs a leg up, says Anosheh Hormozyari, who practices in Los Angeles with DeHay & Elliston and whose clients include ExxonMobil and 3M. “They’re able to recoup a lot of money; it’s a lot easier to get in California than in other states.”

Hormozyari says plaintiffs are inclined to sue financially solvent companies, not the ones most likely to be responsible for their asbestos exposures. “You throw the pasta on the wall and see what sticks. That’s kind of how it seems.”

She denies that depositions are extended for any reason other than to gather pertinent facts. “I’ve never seen it purposely stall in the hope that something unfortunate happens to the plaintiff,” Hormozyari says, noting that she and plaintiffs lawyers recently agreed to a 26-hour deposition. “The majority of these sick plaintiffs will not make it to testify for trial. You have to find a way to lock [in] the testimony for trial.”

Like most states, New York doesn’t limit the length of depositions, relying on cooperation between opposing lawyers or court discretion to curb testimony. Among those with limits are Texas, which restricts depositions to six hours, and Arizona, which holds them to four.

Only a third of the states have formal limits, according to Stephen Nichols, a defense lawyer with Polsinelli in LA who co-authored a 2015 article about asbestos depositions, “The Discovery Deposition Conundrum.” Nichols urged shorter, more efficient depositions, advising lawyers against falling into “a ‘groundhog day’ mentality” with witness questioning.

Simon blames local courts in California for allowing defendants to drag out formulaic depositions far longer than what is considered ample time in other jurisdictions. “The cross-examinations in California are lengthier, but not better,” he says.

California lawmakers emulated federal courts in 2013 by limiting most civil depositions to seven hours. An exception was made for complex cases, including asbestos claims, which were given a 14-hour cap.

But lawyers say jurisdictions see the limit as a suggestion, not a hard-and-fast rule. In 2014, the Los Angeles County Superior Court defaulted to an older, 20-hour guideline after it was sued by a defendant who hadn’t had time to question a plaintiff in an asbestos case. The court also coordinates asbestos cases in San Diego and Orange counties, and has been known to grant additional time beyond 20 hours.

In October, Judge Emilie Elias of the LA County Superior Court declined a request to block Kordestani from being deposed further in a case filed by another former worker at Iran’s Abadan refinery, Samad Sarooie. Abadan was among the world’s largest refineries during the late 1940s, producing nearly half a million barrels daily, according to court documents.

The Sarooie case is separate from Kordestani’s own 2013 suit. Though the two men played basketball occasionally, Kordestani testified that he knew Sarooie “not at all well” and was unable to provide any details on his work history.

“They just drill and drill; they ask the same question 20 times,” Kordestani’s daughter, Neda, says of the August 2015 deposition that was mandated by subpoena. “My dad doesn’t even know enough about the facts they are looking for.”

The deposition transcript shows repetitive questions about Sarooie’s work history that Kordestani was unable to answer, as well as detailed questions such as whether Kordestani could recall the sizes of crates and boxes he saw in the refinery. The deposition was cut short when Kordestani’s wife became concerned for her husband’s health; he had spent the night before at the hospital.

Neda Kordestani says her father’s health has only worsened since his 2013 mesothelioma diagnosis, with recent bouts of pneumonia and shingles. He has undergone more than two dozen rounds of radiation and chemotherapy and uses an oxygen machine to breathe.

Kordestani can be deposed again for the Sarooie case since his testimony is considered incomplete, but his lawyer and daughter say he has no intention of participating any further in a lawsuit in which he has no stake, regardless of any legal repercussions. “You have someone who is spending their entire exis-tence trying to stay alive,” says his lawyer, Benno Ashrafi, who oversees the asbestos practice at Weitz & Luxenberg in Los Angeles.

Erin Carpenter, who represents defendant Amec Foster Wheeler in the Sarooie case, did not respond to several requests for comment. Carpenter had previously deposed Kordestani at length about the Abadan refinery in the 2013 case. His firm, Hugo Parker, subpoenaed Kordestani for the Sarooie case.

“Many of these cases have people who are dying. They have to be subjected through depositions and all of that. It’s a hard thing,” Elias said in court in October. “I understand [Kordestani] is very ill, but if I take the position that very ill people don’t have to have their depositions finished, we will have no depositions taken.”

Elias played down the seriousness of a note from Kordestani’s oncologist that read “any further deposition of Mr. Kordestani will cause immense amount of physical harm to Mr. Kordestani and could shorten his life.”

Said the judge: “It’s not going to cause his death.”

A court representative declined to comment on Elias’ behalf.

This article originally appeared in the April 2016 issue of the ABA Journal with this headline: “Dying Depositions: Plaintiffs in California asbestos cases feel they’re being questioned to death.”

Few states have restrictions on how long depositions can last

How long is too long when it comes to depositions? The answer depends on where the case is being heard and which side you’re on.

While federal courts limit depositions to seven hours, most states have no limits on the books. Only a few have enacted restrictions, ranging from three hours in Illinois to 20 in New Hampshire.

A 2015 article authored by two defense lawyers, “The Discovery Deposition Conundrum,” breaks down which states have limits and which don’t. “At every plaintiff deposition,” it notes, “there is a natural tension created by the right of defendants to understand thoroughly the nature and factual support for the claims against them as well as facts that support their defenses and concern about the health of an ill and often elderly plaintiff.”

In asbestos cases, depositions take on added importance due to the often-frail health of plaintiffs suffering from diseases such as mesothelioma.

Even in states with limits, there’s variation in how the rules are enforced.

California generally follows the federal seven-hour limit except in cases considered “complex,” such as asbestos lawsuits. Some courts routinely allow depositions in these cases to exceed 20 hours.

Depositions in Illinois are formally capped at three hours, though informal questioning can go on longer if the plaintiff is healthy enough to answer, says Perry Browder, president of the Illinois Trial Lawyers Association.

Browder chalks up the “long and arduous” depositions seen in California to both legal practice and culture. In Illinois, Browder says, a lead defense lawyer typically deposes a plaintiff for about 2½ hours, after which other defense counsel are allotted 15 minutes apiece for questioning.

“People are efficient,” Browder says. “You get to the point.”

Most states without formal limits, such as New York, have other mechanisms that can help rein in the discovery process, including the length of depositions.

The process isn’t perfect, Ferguson says, but there’s an expectation of cooperation between parties. “There’s an unwritten rule that this deposition is not going to take 20 days,” he adds.

“We know who all the potential defendants are and could be,” Ferguson says. “There’s been decades of discovery. There’s no mystery.”

Jie Jenny Zou is a reporter with the environment and labor team of the Center for Public Integrity in Washington, D.C.