Play by the Rules: There Is a Right Way to Make Objections 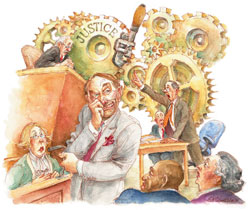 “Some lawyers have strange ways of making objections,” said Judge Horatio Standwell when he opened the presentation on trial techniques that he and Angus gave at the local bar association’s Wednesday night meeting.

“I heard an interesting one just this morning from a lawyer who was complaining about a harmless quip made by the opposing counsel: ‘Objection, your honor! That remark is unfair, and she knows it!’

“I admit to reacting with a little whimsy,” said the judge. “ ‘Counsel,’ I said, ‘you’re not just saying this was improper. You’re saying it was an “on purpose,” aren’t you?’

“ ‘You’re right,’ I told him, ‘but not every passing quip is a capital offense. Objection overruled.’ ”

“Which brings us to the bar committee’s list of things good lawyers shouldn’t bother to say,” said Angus. “And at the top of the list is: ‘I’m sorry, your honor, but I must object.’ ”

“When you think about it,” said Judge Standwell, “that’s not just a strange remark. It’s downright silly. The lawyer is apologizing for making an objection that could easily just be skipped. And I hear it all the time.

“So my response to ‘I’m sorry, your honor, but I must object’ is: ‘No, counsel, the law does not require you to make any objection you don’t want to make unless your client insists on it. Is that what happened here?’

“And even though lawyers know they have to be ready with a plausible reason for their objection,” said Angus, “they often can’t think of the proper one in time.”

“So that brings us back, Judge, to the first objection you mentioned,” said Angus. “It’s one that is apparently thought to be like a broad-spectrum antibiotic that will cure almost any situation. Which must be why I hear it with increasing frequency: ‘Objection, your honor! That’s unfair, and he knows it!’ ”

“You’re right,” said Judge Standwell. “Why else would any lawyer make an objection like that?”

No one in the audience offered an explanation—probably because most of them had recently said something just like that without thinking why they did it. So Judge Standwell gave his own answer: “Because every lawyer knows you’re supposed to give the legal basis for your objection, but they often don’t know the right magic words for the situation.

“After all, it’s one thing to say ‘Objection, hearsay’ when a witness is recounting what someone else said, and quite another to get into the intricacies of the best-evidence rule when a copy is offered as proof of the contents of a document instead of an available original.”

“Now let’s shift gears a little,” said Angus.“Say you have an odd client who insists that you make a strange objection right in the middle of trial. Does this ever happen?”

“It does,” said Standwell, “but not often. It’s typically only done by a scattering of defendants in criminal cases who are trying to create the impression of ineffective representation by assigned counsel. It’s one of those ideas that get passed around in pretrial confinement.

“If a client of yours ever insists that you make a strange objection, I recommend that you ask that you and your client be permitted to approach the bench ex parte and explain the situation to the judge.

“I only saw it happen once in my 18 years of practice. And frankly, I suspected that the client—who was the defendant in a criminal case—also was trying to provide some support for his insanity defense by sporadically barking like a dog and spontaneously making strange objections on his own during the course of the trial.

“When the reason for the other side’s objection is not clear on its face,” said Standwell, “don’t just ignore it. Find out what’s going on: ‘Your honor, if we might have the basis for the plaintiff’s objection, we’d be happy to provide whatever evidence counsel feels is missing.’

“Notice that you’re not asking the judge to explain what your opponent is up to or is requesting from you. The judge is often multitasking up on the bench and isn’t about to try to tell you what is going on anyway. Approaching the problem this way lets the judge put the monkey on your opponent’s back very neatly: ‘Counsel, if you might tell defense counsel—as well as the court—what evidence you feel is missing, it would help move things along.’ ”

“And not all objections are helpful or well-founded,” said Angus. “The uncomfortable truth is that there are a number of jackleg lawyers out there who will stand up and object whenever they think the other side’s case is going too well.

“By the way, the obligation of the objecting lawyer to give the basis for an objection that is not self-evident is why some lawyers start by saying, ‘Objection, your honor. That’s unfair, and counsel knows it!’

“And of course, the psychological purpose behind that ploy is that there are lots of times when a lawyer senses there’s something wrong with his opponent’s question but doesn’t know the proper basis for an objection—if there is one.”

“On the other hand,” said Judge Standwell, “when what the opposing lawyer or his client has said is harmless and only improper as a matter of form, I typically just say ‘Overruled’ and proceed.

“But when there is something truly improper, harmful or offensive in the question, the witness’s answer or the other lawyer’s objection, I have a serious problem that must be dealt with.

“When that happens, I have both counsel approach the bench and decide whether to have the jury leave if I need to read the offenders the riot act. It’s not often, but sometimes it needs to be done.

“Now,” said Standwell, “suppose the lawyer isn’t exactly a heavyweight contender in using the rules of evidence and procedure, but still doesn’t like the way things are going. So he tries to throw a monkey wrench into the gears of justice by making all the seven magic objections in one breath: ‘Objection, your honor. Leading, multifarious, argumentative, incompetent, irrelevant, immaterial and calls for hearsay!’

“Which, of course, is useless. Saying that a question violates virtually every rule concerning oral testimony fails to be anywhere near specific enough to draw the court’s attention to what might actually be wrong with the question.

“One of the gifts some lawyers think they have is being able to talk about how outrageous their opponent’s conduct was without ever saying what was wrong with it or pointing out what harm it might do.”

Which is why Angus has a plaque with a simple motto hanging on his office wall: It helps to know the rules.