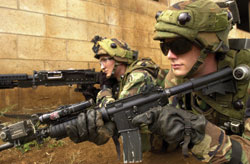 Thousands of U.S. military veterans can attest that one of their toughest battles is fighting through the bureaucratic jungle of the Department of Veterans Affairs to obtain disability benefits.

Very often, the development of a veteran’s claim is the hardest part of the process that determines whether the veteran is entitled to compensation from the VA for disabilities relating to combat wounds or other injuries stemming from military service.

The process can be a daunting task for the VA as well as the veteran. Even though the VA has made progress in the past year toward reducing the backlog in processing claims, the department also is facing an unprecedented increase in the number of claims being filed. As a result, veterans who may be eligible for compensation are experiencing delays while the VA gathers evidence required to review and decide their claims. Nearly half of the 558,000 pending claims have been waiting more than 125 days for adjudication.

As a key part of the effort to reduce the backlog in processing claims, the ABA, in close coordination with the VA, recently launched the Veterans’ Claims Assistance Network. The goal of ABA VCAN is to recruit lawyers who will work on a pro bono basis to help veterans complete their claims packages for expedited review by the department.

Under a memorandum of understanding finalized in June by the VA and the ABA, lawyers will focus on pending claims of unrepresented veterans that have had only preliminary, if any, development. The service will be provided at no cost to the veterans.

ABA VCAN will begin as a pilot project in Chicago and St. Petersburg, Florida, that will run through 2015. Approximately 3,300 veterans in those areas will receive a letter from the department explaining their options for representation, including assistance through ABA VCAN. Lawyers who register to participate in the program will be trained and accredited by the VA. The ABA—working with the Legal Services Corp., law firms, the Military Spouse JD Network and other legal services providers—will consider several factors when matching veterans and attorneys, including geographic location, complexity of the claim, and preferences of the veteran and attorney on the nature and scope of representation.

“The ultimate goal is to help these men and women who served our country break free from the backlog and help ensure positive outcomes for their claims,” said James R. Silkenat, the ABA’s outgoing president, in July. Silkenat, a partner at Sullivan & Worcester in New York City, added that “attorneys fundamentally understand what it takes to assemble evidence and present a persuasive case. It is a natural fit to engage the legal skills of lawyers with the need of veterans for assistance in making their cases to the VA for disability compensation.”

The White House counsel’s office initiated discussions more than a year ago with the ABA, the VA and the LSC to explore how lawyers might assist in expediting the processing of disability claims filed by veterans. The association and the department first announced their plan to launch the VCAN initiative in August 2013 at the ABA Annual Meeting, when numerous association entities and other groups convened to discuss ways to better assist members of the military, their families and veterans.

“The ABA is a tremendous platform and has tremendous reach,” said Will A. Gunn, the VA’s general counsel at the time. “We have been approached by lawyers around the country about how they can help. The ABA is a great way to reach those lawyers.”

Congress also has been studying ways to address the situation. Last October, the House passed a bill sponsored by House Veterans Affairs Committee Chairman Jeff Miller, R-Fla., that would create a commission or task force to evaluate the veterans disability-claims process and make recommendations for eliminating the backlog.

• Learn how to participate in the Veterans’ Claims Assistance Network.

This article originally appeared in the September 2014 issue of the ABA Journal with this headline: “Call for Reinforcements: Program will mobilize lawyers to help reduce VA claims processing backlog.”