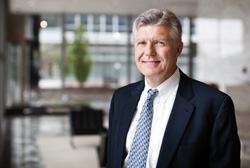 Glenn Hendrix heads an ABA task force that is reviewing a spate of legislative attempts to keep foreign law out of state courts. Photo by Gregory Miller.

On the TV show Face the Nation in December, host Bob Schieffer asked Newt Gingrich how he would resolve his beef with so-called activist judges, including one in Texas who blocked prayer at a public school.

The former House speaker responded that he would instruct U.S. marshals to arrest judges who make controversial rulings and bring them before Congress to explain their decisions. “You’re raising the core question,” Gingrich said: “Are judges above the rest of the Constitution or are judges one of the three co-equal branches?”

Gingrich’s comment reflects a “mistrust of the judiciary,” says Glenn Hendrix, an Atlanta-based litigator and chair of the ABA’s Foreign Law in State Courts Task Force, which is reviewing a wave of state bills aimed at keeping foreign laws out of state courts.

“There’s a sense that judges are out of control and not accountable to the people,” Hendrix says. “It’s not widespread, but it’s deeply felt by a percentage of the population. Where that comes from is hard to say.” In Georgia, he says, judges are elected—meaning they already represent the people—so going after them “makes no sense.”

State lawmakers across the country are considering bills that would limit the power of the judiciary. Many of the proposed laws reflect a concern about foreign influence in U.S. courts. A few states, including Tennessee, Louisiana and Arizona, have already adopted versions of such laws.

But other bills are directed at judges themselves. The Iowa Freedom and Sovereignty Act, for example, provided that any foreign law in conflict with the Declaration of Independence or the U.S. or Iowa constitutions would have no effect in the state. But it also provided that anyone who made use of such a law would be guilty of a felony, and that judges who violated the provisions would have their law licenses revoked and could be subject to private rights of action. Iowa’s SB 2198 died in the state senate’s government committee.

New Hampshire has also considered a host of bills that attempt to limit judicial review power. Constitutional Amendment Concurrent Resolution 25, for instance, would have restructured the state’s judicial branch altogether, providing that the supreme and superior courts would no longer be constitutionally established courts.

CACR 28 provided that the legislature alone would determine the constitutionality of legislative acts. Both bills failed. Other proposed amendments would require that judges be at least 60 years old, limit judges to five-year renewable terms, and permit the governor and executive council to remove judges who don’t “behave well.”

Many bills stem from fears about Shariah, a set of Islamic religious principles (covering everything from food restrictions to the structure of loans and divorces) intertwined with the laws of many Muslim countries. Those fears have spurred some state lawmakers to make a bigger grab for judicial power. Concerned primarily about cases in which U.S. courts upheld child custody or divorce rulings from Islamic countries, proponents of anti-Shariah state bills include conservative groups like Act for America, the American Public Policy Alliance and the Faith and Freedom Coalition. (See “The Law of the Land,” ABA Journal, May 2011.)

“It seems like pandering to baser political instincts,” says University of San Francisco School of Law professor Joshua Paul Davis. “I’m struck by how rare these supposed occurrences seem to be. It reflects hostility to a vague threat of outside law. It’s not racism in the classic sense, but there’s an element of Islamophobia. Targeting judges for applying the law how they see fit is a very serious constitutional issue.”

Addressing Shariah, the American Public Policy Alliance has drafted a model law, the American Laws for American Courts Act, which several states have considered. The alliance relies in part on a 2011 study by the Washington, D.C., nonprofit Center for Security Policy. The study found 50 appellate cases in 23 states in which Shariah was relevant to the cases’ arguments or outcomes. The model law seeks to prevent “infiltration and incursion” of foreign laws that are contrary to American values of due process; the freedoms of religion, speech and the press; and the rights to privacy and to bear arms, according to the group’s website.

Encapsulating choice of law, choice of venue and comity principles, the model law is nothing new, insists Stephen Gelé, a New Orleans lawyer and the group’s spokesman. But opponents of the ALAC Act, including the American Civil Liberties Union and the Council on American-Islamic Relations, insist that while judges occasionally cite Shariah in dicta, legislation directing judges to ignore foreign influence is unnecessary.

Still, these groups “have whipped people into hysteria” and raised a lot of money, says the ABA’s Hendrix. He testified against Georgia’s version, HB 242, which was defeated.

But Gelé of APPA notes that unlike the Iowa and New Hampshire bills, the American Laws for American Courts Act addresses a series of decisions resulting in “gross due process violations,” yet is not aimed at judges. “Criminal penalties or tort actions are not the primary concern of ALAC, which is simply to give guidance to judges in certain procedural circumstances,” he says. “It’s up to each state to determine what regulation the executive and legislative branches have over the judiciary. The APPA is not on a witch hunt for judges.”

In New Hampshire, state Rep. Josh Davenport proposed CACR 25 because he was troubled by what he saw as due process violations, specifically exculpatory evidence being “repressed” by judges. “A series of court rulings showed that power was being taken from the legislature by the courts,” he explains.

Concerned that the judiciary is acting without a check on its powers, Davenport would like to restore New Hampshire’s pre-1966 structure, which provided that the judiciary could be changed or even dissolved by legislative will. That, he says, ensured judicial neutrality and balanced the influence of the three branches. “To achieve the separation of powers, you want the three branches slamming into each other. What you don’t want is domination by one.”

Noting that the number of votes his bill received was the same as the number of hits for his YouTube videos that explained it, he says CACR 25 “did not do well.” In fact, the freshman legislator quipped, “it went down in flames.”

If the legislature is meant to reflect the will of the people, “you don’t want a pull away from power by the people’s representatives,” Davenport adds. “That’s why this movement is occurring.”

For his part, the ABA’s Hendrix says he finds it reassuring that the Georgia legislature looked at these issues responsibly, “especially when these groups generate thousands of emails and get people worked up.”

While these state bills are mostly political and haven’t gone too far legislatively, they, like Gingrich’s comments, go to the heart of a fundamental principle of American government.

“Every state constitution has the notion of separation of powers, with entities that make the laws, enforce the laws and judge the application of laws,” the USF’s Davis explains. “But that can play out differently. Some states have elected judges, some are appointed. It depends on the constitutional structure, and remedies for violating the separation of powers vary state by state.”

But, he adds, “if a state legislature is overreaching and preventing judges from applying the law, that could rise to the level of a federal due process violation.”