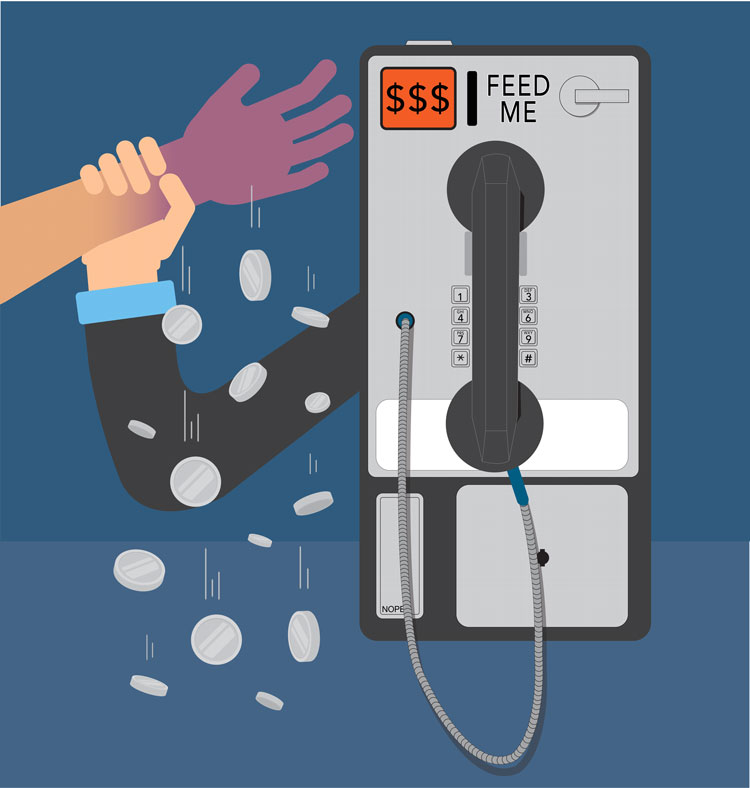 Hidden among the corporate reports and bureaucratese in Federal Communications Commission docket No. 12-375 are letters from prison inmates and their families, pleading for relief from high phone rates. Amsani Yusli, whose testimony was submitted in 2015 by the Campaign for Prison Phone Justice, wrote that one 20-minute call per day from her husband cost $130.20 per month.

“This amount translates to groceries for the month,” she wrote. “When you don’t have much, you have to choose between feeding your kids ... and allowing your kids to know their father.”

After 14 years of such pleas, the FCC in 2015 made a rule capping rates for in-state prison phone calls. But the affected telecommunications companies sued—and in June 2017, the U.S. Court of Appeals for the District of Columbia Circuit handed them a victory in Global Tel-Link v. FCC. The court said the FCC overstepped its statutory authority when it regulated in-state calls, and that the way it set the rates was “hard to fathom.”

To make matters more interesting, the court reached that conclusion without help from the FCC. Six days before oral arguments, the agency abandoned parts of its own defense, conceding oral argument time to a class of inmates and their families who’d intervened in the case. Advocates for prisoners say that unusual circumstance helped undermine the FCC’s case.

As a result, they say, about two decades of efforts to address high inmate calling rates are back to square one.

“Prisoners and their families are getting ripped off, plain and simple,” says Andrew Schwartzman, an attorney for the intervenors and the Benton Foundation senior counselor at the Georgetown University Law Center’s Institute for Public Representation.

Opinions differ on why inmate calling rates are so much higher than those in the free world. The prison telecoms and their corrections agency clients say it’s because extra costs such as monitoring phone calls are associated with serving prisons.

But inmate advocates say the real driver of costs is “site commissions,” an industry practice in which telecoms pay a percentage of their revenues to corrections agencies. These range from 20 to 88 percent of revenues, and their size influences the agencies’ choice of contractor.

In exchange, the telecom gets a monopoly within the prison, which allows it to recoup its profits with high rates. Inmates and the people they call have no other choice, so they either pay those rates or forgo phone calls.

Paul Wright, executive director of the Human Rights Defense Center, says that’s bad for society. He cites studies showing that maintaining contact with loved ones on the outside helps prisoners stay out of trouble once they’re released.

“The people running the prisons and jails ... know all this, and they just make the decision to take the kickback money and run with it—and public safety and sound public policy be damned,” says Wright, a former jailhouse lawyer.

The FCC cited that research when it capped calling rates. The agency intentionally set those caps too low to account for site commissions, saying they’re not a cost of providing phone calls. Rather, they’re “location rents” similar to paying for the right to locate a pay phone in a high-traffic area, which the FCC has found is not a cost of doing business.

Therefore, the agency relied on Section 276 of the Telecommunications Act of 1996, which requires the FCC “to ensure that all pay phone service providers are fairly compensated for each and every completed intrastate and interstate call.” This language was intended to stop undercompensation of local pay phone companies—but the commission said it also could prevent overcompensation.

This provoked a sharp dissent from Ajit Pai, then an FCC commissioner, who wrote in 2015 that the agency was overstepping its authority. That became important in January 2017, when President Donald Trump nominated Pai as the FCC chairman.

Under the new leadership, the FCC declined to defend its position on Section 276, instead conceding 10 minutes of oral argument time to the intervenors. That letter was sent six days before oral argument, requiring Schwartzman of the Georgetown University Law Center to prepare at the last minute.

It “raised an unnecessary and very high hurdle for any advocate to clear,“ says Lee Petro, another attorney for the intervenors and of counsel at Drinker Biddle & Reath’s Washington, D.C., office.

Print and initial online versions of "Talk Isn't Cheap," May, should have reported that Oklahoma Solicitor General Mithun Mansinghani represented that state and 10 others as petitioners, alongside telecommunications companies, in a dispute over prison phone rates.

This article was published in the May 2018 issue of the ABA Journal with the title "Talk Isn’t Cheap: Appeals court decision stymies attempts to regulate the high price of prison phone calls."