Relentless Reprobates Go All Out to Make a Point 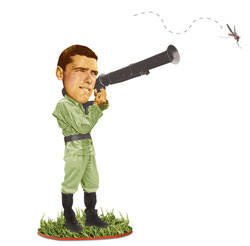 For some folks, living with a minor injustice or a perceived slight is simply not possible. They just don’t have it in them to let it go and move on. They are determined to prevail and emerge the hero (in their own minds, anyway).

Neither common sense nor mathematics will keep some stubborn souls from hunting mosquitoes with a bazooka.

Case in point: Beaufort County (N.C.) Sheriff Alan Jordan fired one of his deputies, Tony Keech, for cause in January 2010. Keech was instructed to reimburse the county finance office $350 for a gym membership that had been provided for him. He refused.

The sheriff’s office enlisted the aid of law firm Womble Carlyle Sandridge & Rice to take over the dunning duties—alas, to no avail.

In November, Jordan sued Keech in small claims court and won a judgment for roughly half of the $350. Keech appealed.

In February, with taxpayers already on the hook for more than $5,000 to Womble Carlyle, Jordan and the county cried uncle and paid Keech’s judgment and court costs—which came to about $250—in exchange for Keech dropping his appeal.

Intransigence also took hold of a coupon-conscious mom in Bergenfield, N.J. Tova Gerson used a $5 coupon at a Century 21 department store toward her purchase of more than $100. Upon returning one of the items, Gerson found that the value of the coupon had been prorated, netting her 80 cents less than she expected. She claims that the practice negates the original value of the coupon.

But 80 cents is 80 cents, and Gerson was determined to recoup those three quarters and a nickel, even if it meant retaining a lawyer (reportedly her father) and filing a $5 million class action lawsuit against Century 21.

If there’s a lesson to be learned here, perhaps it’s this: In a world beset with natural disasters, terrorism and economic woe, remember—don’t sweat the small stuff.