Rolling the Dice: States Double Down in Bid to Lure Online Gamblers 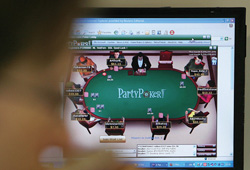 With the Justice Department’s recent reinterpretation of the Wire Act, online poker could soon be a click away. Photo Reuters/Toby Melville

Everything from Internet poker to slots on your iPhone is on the table now after a legal opinion from the U.S. Department of Justice that toppled the main federal obstacle to online gambling.

The opinion, released to scant media coverage Dec. 23, got the attention of state lotteries, casino operators and game makers across the country. In it, the DOJ said the federal law banning use of “the wires” to conduct gambling operations applied only to sports betting. Now, legal experts say, Internet wagering appears to be permissible if conducted within the boundaries of a state that allows it.

“It eliminates virtually all federal barriers for state-legal Internet gambling,” says I. Nelson Rose of Whittier Law School in Costa Mesa, Calif., who points out that other federal statutes aimed at gambling are predicated on an underlying violation of state law. For example, a federal law bans using the wires to transmit payments, such as those sent by credit card numbers. If a state law permits gambling, the federal law does not apply.

State lotteries are first in line to push through the newly opened door. Online lottery games could boost sagging state revenues and give the entire industry an infusion of new players and sales. Turf battles already are percolating with casino companies angling for their share of the billions in new gambling dollars expected to flow from online games.

About a dozen states allow Internet betting, under the oversight of state gambling regulators, according to GTech, a company based in Providence, R.I., that supplies games and other services to state lotteries. In other states, legislative action would be required to authorize it.

The remaining legal questions center on the states: What types of regulatory schemes they will enact, how they’ll tax Internet gambling, which games they will authorize, and who will be allowed to offer them.

All these issues must be hashed out in legislative hearing rooms, and probably also in courtrooms, as states grapple with the implications of the Justice Department’s sudden abdication, and the myriad fiscal and policy considerations associated with Internet gambling.

“I think you’re going to have a lot of law made over the next few years,” says Grier Raclin, general counsel at Scientific Games Corp. in New York City, a provider of lottery games.

“The future is going to be driven by state action,” says Robert Stocker, head of the gaming practice at Dickinson Wright in Lansing, Mich., and chair of the ABA Business Law Section’s Gaming Law Committee.

Illinois was the first state to offer lottery tickets online, beginning in March with the recent Mega Millions $640 million jackpot drawing. The Illinois Lottery Commission, along with New York’s, triggered the Justice Department opinion by seeking a ruling that online sales of lottery tickets would not violate the Wire Act.

Previously, federal prosecutors had interpreted the 50-year-old statute as barring not only sports bookies taking bets over the telephone, but any gambling that makes use of the wires, including the Internet. They used the Wire Act to prosecute operators of online gambling sites, making lotteries and casino companies reluctant to offer Internet games.

The DOJ’s Office of Legal Counsel went further than Illinois and New York requested, opining that the Wire Act applies only to sports betting. Effectively, this leaves it to the states to decide whether to permit other types of Internet betting.

Online offerings are expected to spread well beyond the lottery ticket sales Illinois pioneered. Nevada legislators have authorized online poker, and a New Jersey bill has advanced that would allow casinos to take bets from state residents over the Internet. Legislation pending in neighboring Delaware would permit the state’s lottery to offer a range of games, including traditional casino fare such as blackjack and slot machine games.

“When one state does it, the other states will follow because it’s new tax revenue,” says Hersh Kozlov, a partner at the Cherry Hill, N.J., office of Duane Morris. “Every state is now in competition for the diminishing tax dollar,” says Kozlov, who advises companies in the gambling industry.

Casino companies are on guard against such incursions by state lotteries. They’re pushing for a federal law that would create uniform regulatory schemes across the country and set standards on matters like a minimum age for gamblers.

“If you don’t have those federal standards, you’re going to have a race to the bottom” among states, warns Frank J. Fahrenkopf Jr., CEO of the American Gaming Association, which represents the commercial casino industry.

The ABA’s Stocker also expects Congress to weigh in with legislation setting up a federal tax system for online gambling, as well as standards for preventing underage gambling and protecting players’ funds. “As more states pick up on this, the pressure will be on Washington” to act, he says.

Another fault line exposed by the push for online gambling divides state lotteries and the convenience stores that have traditionally served as the primary outlet for lottery sales. Retailers in Illinois objected to the launch of online ticket sales, fearing it would cut into store sales. Similar protests from New York store owners have slowed the move to online lottery sales in that state.

“We are completely against states moving lottery sales online,” says Corey Fitze, director of government relations at the National Association of Convenience Stores.

Illinois convenience stores agreed to support legislation allowing the lottery to sell Powerball tickets online in return for some provisions meant to benefit stores. Among them are “value-added cards” consumers can purchase at stores and use to buy online lottery tickets, similar to the way iTunes cards are used to buy music online.

“We in Illinois are headed in the right direction, and it will benefit all of us,” says William Fleischli, executive vice president of the Illinois Association of Convenience Stores and the Illinois Petroleum Marketers Association.

Online gambling also has worried those who try to combat addiction. Keith Whyte of the National Council on Problem Gambling says the easy accessibility of online games, along with their faster pace and higher stakes, increases the risk to gambling addicts. Whyte’s group is urging lotteries and casinos to adopt safeguards that will limit losses and keep minors from playing online.

Game makers, meanwhile, are forging ahead with online versions of casino favorites like roulette and slot machines. Bally Technologies Inc., a longtime maker of slot machines, has formed a new business unit called Bally Interactive to produce games for what it calls “I-gaming.” A spokesman says the Las Vegas company also recently acquired a platform for Internet poker. And on June 21, Bally won approval from Nevada regulators to open a poker site.

Despite their misgivings about a fragmented state-level regulatory system, casinos aren’t likely to be left behind. Caesars Entertainment, which owns or operates 52 casinos under the brand names Caesars, Harrah’s, Horseshoe and others, will be a player in the Nevada Internet poker market, a spokesman confirms.

Gaming companies hope the Internet will inject youth and growth into a market that’s as mature as its customers, who skew older. Jones of the Illinois Lottery, for example, thinks online ticketing could bring up to a million new players and $100 million in additional sales. Fahrenkopf of the American Gaming Association points out that the worldwide Internet gambling market—including sports betting—is estimated at $45 billion a year.

The risk for the industry is that the Internet just shifts gambling to laptops and smartphones from casinos and convenience store checkout lines. But even if that happens, lotteries and casinos have little choice but to follow their customers.