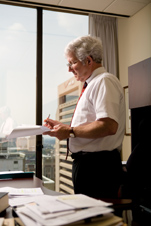 When Rosann Delso first sought to hire attorney Richard E. Shapiro to handle an ERISA claim, he initially told her he had a conflict. Shapiro, it turned out, was the former union lawyer at Delso’s employer, pharmaceutical giant Merck & Co.

Unable to find an attorney, Delso elected to pursue her claim pro se. She was suing Merck over her deceased husband’s retirement plan.

Shapiro, who practices in Princeton, N.J., was later asked by the employee union to “assist” Delso with the development and writing of her pleadings. The union was apparently concerned that an adverse result in Delso’s claim could set a bad precedent for other union members’ claims against the plan.

Shapiro did so—but without notifying the parties in the ERISA case, according to a March decision. Delso v. Trustees for Retirement Plan for Hourly Employees of Merck & Co., No. 04-3009 (D.N.J.).

Shapiro’s assistance—called ghostwriting—came back to haunt him. In her ruling, Magistrate Judge Tonianne Bongiovanni found that Shapiro violated the state’s ethics rules and may have violated federal court requirements that attorneys sign pleadings for which they are responsible.

“New Jersey’s courts have held that the duty to disclose is an af­firmative one—and supersedes the attorney’s duties to his client,” Bongiovanni wrote.

Because judges often give leeway to pro se litigants, Delso’s arrangement with Shapiro gave her an unfair advantage, the ruling said. The court also said that a de facto attorney-client relationship existed between Shapiro and Delso, since Delso clearly relied on Shapiro’s legal knowledge and drafting skill.

Though Shapiro told Delso to be up front with the court about his involvement, the judge wrote that Shapiro should have informed the court himself by signing the documents.

The permissibility of ghostwriting—in which a lawyer drafts court papers for a client but does not enter an official appearance in the case—was a matter of first impression in the jurisdiction, Bongiovanni said.

However, courts around the country increasingly are coming to grips with the practice, one of a number of services that lawyers are offering as part of the recent trend of unbundling. In contrast with traditional full-service representation, lawyers agree to be responsible for only carefully delineated portions of a client’s case. In addition to ghostwriting, services can include drafting a settlement agreement without participating in the negotiations, researching a legal issue for a client without getting involved in the larger case, or reviewing client-drafted documents strictly for compliance with court rules.

In a formal opinion issued in May, the ABA states that a lawyer may provide drafting assistance to a pro se litigant without disclosing to the court the lawyer’s involvement, so long as local rules do not prohibit such assistance. ABA Formal Opinion 07-446.

Under ABA Model Rule 1.2(c), “A lawyer may limit the scope of the representation if the limitation is reasonable under the circumstances and the client gives informed consent.”

The opinion disputes the concern by some courts and state ethics panels that ghostwritten documents make pro se litigants the beneficiaries of special treatment. Instead, the opinion states, “the fact that a lawyer was involved will be evident to the tribunal.” In addition, “if the assistance has been ineffective, the pro se litigant will not have secured an unfair advantage.”

Nor, according to the opinion, is nondisclosure of legal assistance dishonest so long as the court is not misled by a failure to disclose. “The lawyer is making no statement at all to the forum regarding the nature or scope of the representation,” the opinion states. Indeed, in abiding by the client’s wishes, the lawyer may be under a duty not to reveal the representation.

But, as Bongiovanni noted in her decision, while one of New Jersey’s professional conduct rules allows limited practice, so long as the client gives informed consent, “the remaining [rules] have been crafted with full service or traditional representation in mind.”

It will be up to the state, the judge said, to adopt revisions to the ethics rules allowing for ghostwriting and other unbundled services.

But many states have not adequately addressed issues involving unbundled legal services in their ethics rules, leaving attorneys unsure of where the lines are, says James McCauley, ethics counsel for the Virginia State Bar.

“The broad question is whether unbundled services do more harm than good,” says McCauley, whose office is in Richmond, Va. “On one hand, it’s helpful for sophisticated pro ses to be able to get lower-cost help. On the other hand, the people most likely to seek unbundled services tend to do so solely for financial reasons, meaning they might not be truly able to handle other aspects of the case on their own. The question for the lawyer is, ‘Where does my responsibility begin and end?’ ”

McCauley wonders whether at­torneys have the same duty of in­vestigation to make sure that the claim is well-grounded in law and fact when hired solely to write plead­ings or other court filings. If so, he notes, the lawyer may have to spend so much time on the case that lim­ited representation is no longer cost-effective.

McCauley says virtually all state ethics rules provide that limiting rep­resentation is not appropriate unless it can be done without injury to the client’s interests.

So, says McCauley, lawyers first have to gauge whether getting involved on a limited basis actually serves the client better than refusing representation, even if the refusal is based on the client’s inability to pay. Some­­thing is not always better than nothing, he adds.

At least one ethics expert says such fears are unfounded. New York University law professor Stephen Gillers says the New Jersey case hinges on a key element: The lawyer failed to disclose his involvement to the court, according to the opinion.

The New Jersey case “crosses the line from permissible unbundling to what the magistrate criticized: when a lawyer’s work product is presented as a pro se litigant’s own work,” says Gillers.

Similarly, Gillers adds, lawyers who ghostwrite briefs for other attorneys do not violate ethics rules because the appearing attorney takes responsibility for the work done by the drafting attorney, much as a partner in a large firm takes responsibility for work done by associates. In some instances, even when a lawyer is drafting for another licensed attorney, state rules require drafting attorneys to sign court documents or to include a notation such as “document prepared by” and their name and bar number, he notes.

Some states have begun to address the complex ethical issues. In Colo­rado, for example, new court rules allow attorneys to draft pleadings for pro se litigants, provided they notify the court of their involvement. Ari­zona, a state consistently at the forefront of helping pro se litigants navigate the court system, allows limited behind-the-scenes help. In Delaware, lawyers may limit the scope of their representation, but may not limit their liability to the client.

None of these rules has been thoroughly tested yet, however, and McCauley predicts courts will eventually need to make specific determinations of the exact scope of representation.

For example, he says, what happens if an attorney drafts a pleading for a pro se litigant that is dismissed with leave to amend? Does the attorney automatically have to replead as part of the original limited representation agreement, or may he or she negotiate a new payment for the extra work? And what if it quickly becomes clear to the judge that the pro se litigant doesn’t fully comprehend the scope of the arguments the attorney made in the pleadings and cannot adequately argue the points of law in court? Can the judge require the drafting attorney to make an appearance?

McCauley says that unbundling, while useful in transactional situations, is much more complicated in a litigation context. Gillers believes that careful drafting of representation agreements as to the scope of work, plus full disclosure to courts, is key.

As for silent, or undisclosed, ghostwriting by attorneys, both say they don’t see the problem growing because most lawyers are reluctant to do it. If courts are going to authorize limited assistance for pro se litigants, they need to rewrite the rules to lay out the level of duty and exposure for lawyers, says McCauley.

“People—clients and lawyers—want to know exactly what they’re getting themselves into.”