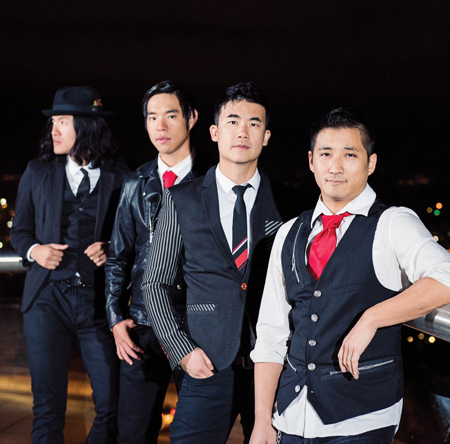 The First Amendment—what the late, great Nat Hentoff termed “the first freedom”—takes a leading role before the U.S. Supreme Court this term. The justices will decide a trio of cases that could impact a slew of important free speech principles, including commercial speech, the government speech doctrine, online privacy, the right to receive information and ideas, speech vs. conduct and the viewpoint discrimination principle.

In Lee v. Tam, the court will decide whether a rock band’s effort to trademark its name violates a federal trademark law that prohibits registering marks considered disparaging, scandalous or immoral. Asian-American musician Simon Shiao Tam sought to register the mark of his band’s name, The Slants, which is also a term many Asians consider offensive. Tam says the band seeks to reclaim and take ownership of Asian stereotypes by using the name.

However, the U.S. Patent and Trademark Office denied the claim under a provision of the Lanham Act that prohibits scandalous, immoral or disparaging marks. The PTO determined the mark would be disparaging to “persons of Asian descent.”

Tam appealed to the U.S. Court of Appeals for the Federal Circuit. A three-judge panel agreed the mark was disparaging. However, a divided en banc court reversed and ruled that the government engages in impermissible viewpoint discrimination by deeming certain marks disparaging. “The government cannot refuse to register disparaging marks because it disapproves of the expressive messages conveyed by the marks,” the majority wrote. “It cannot refuse to register marks because it concludes that such marks will be disparaging to others.”

Furthermore, the government writes in its brief, “nothing in the First Amendment requires Congress to encourage the use of racial slurs in interstate commerce.”

However, Tam argues that the disparagement provision allows the government to commit blatant viewpoint discrimination by approving marks it likes and disapproving of marks it dislikes. He writes that “the First Amendment does not allow the government to impose burdens on speech to protect listeners against offense.” Tam also vigorously contests the idea that a trademark is a form of government speech, as people associate the trademark with the views of the trademark holder, not the government. Tam also contends that his band’s name is not disparaging. In his brief, he writes that he is “appropriating a slur and using it as a badge of pride.”

“The decision will be an important signal of the court’s continued skepticism about government discretion over private viewpoints,” says Washington, D.C., attorney Megan L. Brown, who authored an amicus brief for the Rutherford Institute and Consumers’ Research in support of Tam. “Recent cases have shown hostility to expanding government power, but some outliers exist. This should be a no-brainer, given how anachronistic the dis-paragement bar is. If it goes down, the scandalousness bar does too.”

One point that troubles free speech advocates is how fickle officials have been in approving some marks and disapproving of others. “The inconsistency with which the USPTO has enforced the disparagement clause to date is mind-boggling,” says free speech expert Clay Calvert, who directs the Marion B. Brechner First Amendment Project at the University of Florida.

For example, the board has rejected trademarks such as Stop the Islamization of America and Republicans Shouldn’t Breed, yet it allowed Take Yo Panties Off and Murder 4 Hire.

In Expressions Hair Design v. Schneiderman, the court will examine New York’s “no surcharge law,” which prohibits merchants from imposing a surcharge on customers who pay with credit instead of cash. However, the law allows merchants to offer discounts to those who pay in cash.

The law also prohibits merchants from calling the price differential a surcharge but allows them to use the term discount.

Expressions Hair Design and other businesses contend the no-surcharge law violates the First Amendment because it restricts merchants in how they describe transactions to consumers. However, the New York government counters that the law regulates economic conduct and does not implicate the First Amendment.

The case presents the court with an opportunity to explain when a law merely regulates conduct or restricts speech.

“A minimalist approach in Expressions Hair Design would simply hold that the case is only about conduct—economic regulation—and not speech, thereby ducking entirely the thorny First Amendment questions,” Calvert explains. “In contrast, an expansive approach would acknowledge speech is at issue and, in turn, recognize that the case involves not only the right of merchants to speak but also the right of consumers to receive speech.”

Calvert points to the right to receive information and ideas, a concept the high court first articulated in a Jehovah’s Witnesses case in the 1930s. “This unremunerated right to receive speech has been recognized by the Supreme Court multiple times over the years ... but the court has never fully fleshed out the contours of this right. This would be a great chance to do so,” he adds.

“I think the case could be quite significant, obviously depending on how it is written,” says Erwin Chemerinsky, law dean of the University of California at Irvine and an ABA Journal columnist. “It has the potential for opening the door to First Amendment challenges to many other forms of commercial regulation that affect speech.”

Washington, D.C.-based attorney Robert Corn-Revere, who has argued free speech cases before the Supreme Court, agrees that the case could be quite significant. “The case asks the court to distinguish the communication of pricing information from ‘economic conduct,’ a question that will have important ramifications for the commercial speech doctrine.”

Sex Offenders On the Web

Lester Packingham, a registered sex offender, allegedly violated the law by maintaining a Facebook page. The North Carolina Supreme Court upheld the law, finding that it regulated conduct and only incidentally restricted speech. “The interest reflected in the statute at bar, which protects children from convicted sex offenders who could harvest information to facilitate contact with potential victims, is unrelated to the suppression of free speech,” the court wrote.

Critics of the law contend that it also restricts access to a variety of valuable websites, including Facebook, YouTube and the online New York Times. The law prohibits sex offenders from visiting any commercial social networking site that minors can access.

In its amicus brief, the Electronic Privacy Information Center writes that the law “works a constitutional violation of staggering dimensions” by “walling off news, debate, sports, scholarship, art and every other shred of speech published under the same domain name.” However, North Carolina views the law as a regulation of conduct with only an incidental impact on speech. This once again gives the justices an opportunity to rule on the speech-conduct dichotomy.

All three cases were argued early this year. Decisions are expected by June, if not sooner.

The trio of cases should provide much insight into the Roberts court’s free speech jurisprudence, in which the court has a mixed record. The court has expanded the reach of the government speech doctrine, significantly reduced the level of free speech protection for public employees in Garcetti v. Ceballos, and shown scant regard for prisoner rights.

On the other hand, the court has granted greater protection for commercial speech; emphasized the importance of examining for content or viewpoint discrimination; and refused to create new, unprotected categories of speech in cases involving funeral protesters, violent video games and images of animal cruelty.

“It generally has been very protective of speech, except when the institutional interests of the government are at stake,” Chemerinsky says.

“The Roberts court generally has been very strong on the First Amendment, although there have been some notable and disappointing exceptions,” says Corn-Revere. “It has been at its best in protecting types of speech that few people would support—which is the very point of the First Amendment.”

This article originally appeared in the April 2017 issue of the ABA Journal with this headline: "Speech Under Scrutiny: The Supreme Court considers 3 First Amendment cases this term."