Court limits where plaintiffs can bring claims in three rulings 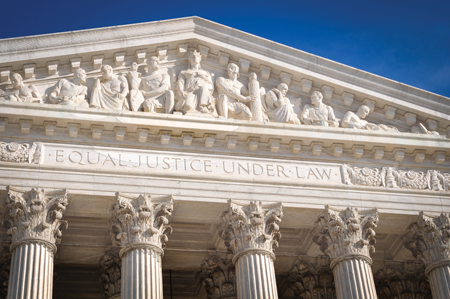 Railroads, flavored water and prescription blood thinners might not, at first glance, seem to have much in common.

But in a Supreme Court term that turned out to be an important one for civil procedure, those disparate things were the backdrop for three significant rulings on personal jurisdiction—when a court has control of the particular parties in a case.

The most important, arguably, was issued late in the term. In Bristol-Myers Squibb Co. v. Superior Court of California, the justices ruled June 19 that the California courts lack “specific jurisdiction” to hear the claims of nonresidents of the state in a “mass action” product liability suit regarding the pharmaceutical giant’s drug Plavix.

“This is huge,” says Charles W. “Rocky” Rhodes, a professor at South Texas College of Law Houston. “This is going to cause great uncertainty going forward in complex litigation against multiple defendants in federal courts and in state cases with plaintiffs in one state and a defendant in another state.”

Rhodes has written extensively about personal jurisdiction and joined a Supreme Court amicus brief on the side of the plaintiffs suing Bristol-Myers Squibb.

Andrew J. Pincus filed an amicus for the U.S. Chamber of Commerce, the American Tort Reform Association and other groups in support of Bristol-Myers Squibb. He agreed that the decision would be felt widely.

“I think the most immediate impact is on these mass actions,” says Pincus, a partner at Mayer Brown and a Supreme Court litigation specialist. “The court is making it very clear that in those cases that you would have to be able to assert personal jurisdiction with respect to each of the plaintiffs claims. The idea that if you can assert personal jurisdiction for a couple of claims, you can assert it for a couple of hundred more won’t fly anymore.”

Bristol-Myers Squibb was only one of the decisions before the court this term that narrowed jurisdiction and effectively limited where plaintiffs may bring their claims.

In TC Heartland v. Kraft Foods Group Brands, a patent dispute that involved brands of flavored water, the high court ruled that under a federal patent venue statute, the definition of “residence” refers only to the state of incorporation for a U.S. company.

Justice Clarence Thomas wrote the 8-0 opinion, which rejected about 25 years worth of interpretations of the patent-venue law by the U.S. Court of Appeals for the Federal Circuit. The court specializes in patent matters, among other things, and the law had allowed patent suits to be brought virtually anywhere in the country. (See “Troll Hike,” July.)

In BNSF Railway Co. v. Tyrrell, the court ruled 8-1 that the Montana courts could not exercise personal jurisdiction in suits filed in that state against the railroad regarding work-related injuries because the injuries did not occur from work that happened in or related to Montana.

The May 30 decision interpreted the Federal Employers’ Liability Act, with Justice Ruth Bader Ginsburg writing for the majority that “the 14th Amendment’s due process clause does not permit a state to hale an out-of-state corporation before its courts when the corporation is not ‘at home’ in the state and the episode-in-suit occurred elsewhere.”

But the Bristol-Myers Squibb case was greeted as the personal jurisdiction ruling that will be most widely felt across the country.

The decision stems from civil actions filed in California state court against Bristol-Myers Squibb, which is incorporated in Delaware and headquartered in New York City. (The suits are referred to as a mass action because they involve multiple suits that raise similar claims, but they don’t seek to be certified as a class action under the federal rules of civil procedure.)

The suits involved 86 California residents and 592 residents of 33 other states, all of whom raised product liability, negligent misrepresentation and misleading advertising claims that stemmed from their allegations that the blood thinner Plavix damaged the plaintiffs’ health.

The non-California plaintiffs did not allege they had been prescribed the drug by California physicians or were injured by it in the state. But they noted that a major national distribution partner of Bristol-Myers Squibb was based in California.

The pharmaceutical company asserted that the California courts lacked personal jurisdiction. But the Superior Court of California for the County of San Francisco held that the company’s extensive activities in the state were enough to establish general jurisdiction.

This article appeared in the August 2017 issue of the ABA Journal with the headline “Making It Personal: Court limits where plaintiffs can bring claims in 3 rulings"