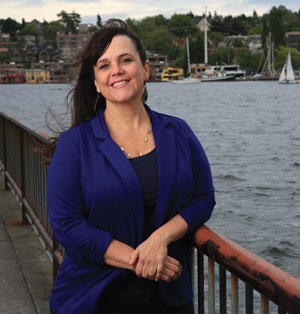 Name sound familiar? Maybe you’ve seen the Animal Planet series Whale Wars, featuring Capt. Paul Watson and vessels from his Sea Shepherd Conservation Society colliding with and throwing smoke bombs and bottles of acid at Japanese whaling ships. Or perhaps you’ve been tracking the litigation filed in federal court on behalf of Japanese whalers against the U.S.-based organization and some of its volunteers. Last year, the 9th U.S. Circuit Court of Appeals at San Francisco held the defendants in contempt for violating a previous order to stop interfering with those vessels; in 2013, the court called the group’s actions “the very embodiment of piracy.”

While the law firm shares a mission with the divisive group, Sea Shepherd Legal’s executive director stresses it’s an independent entity that will deploy different tactics. “I think everybody will find we won’t be controversial,” says Catherine Pruett. “Will there be controversial topics we get involved in? Yes, like trying to get tribes to not hunt whales. But that’s not an attack against the tribes.”

Some in the legal niche immersed in the world’s oceans are taking a wait-and-see approach. “It’s public knowledge that Sea Shepherd’s persona has to do with much more direct challenges to, say, Japanese whaling in a way that’s not a peaceful protest,” says Mark Spalding, president of the Ocean Foundation, a Washington, D.C., group that raises funds for marine conservation efforts. “A lot of folks are uncomfortable with that. It’s going to be really interesting to watch how they use a public interest law practice, the courts, policy and so on, and how this all plays out.”

“While Sea Shepherd’s direct action work has been successful, it’s not always getting a lot of substantive support from government agencies, mostly because existing laws aren’t sufficiently protective,” Pruett says. “We want to enhance laws, make them more enforceable, provide further legal protection, and get more public support behind this idea of protecting marine wildlife.”

Sea Shepherd Legal will be funded by donors and grants (though Pruett can’t yet announce any commitments from major donors) along with fee recovery where possible. Pruett is currently building her crew of three to four attorneys and multiple interns.

Meanwhile, the firm has waded into its new practice. It is drafting comments on proposed federal rules on the North Atlantic right whale and the common thresher shark, along with its opposition to a request by the Makah tribe to hunt gray whales in Neah Bay, Washington.

“We’re also collaborating with prosecutors and the judiciary in multiple Latin American countries to address marine wildlife overexploitation,” Pruett says. “One component will be aligning international migratory and endangered species treaties with local laws, which don’t always reflect what’s in international treaties. We’ll be helping them patch loopholes in their regulations and developing better enforcement strategies for them.”

The timing of the firm’s launch makes sense to Steven Gaines, dean of the Bren School of Environmental Science & Management at the University of California at Santa Barbara.

“The technology of monitoring things in the ocean has exploded in the last decade or so, [such as] being able to track ships with satellite data and map that boats are fishing where they’re not supposed to fish,” he says. “It’s opened up opportunities for legal challenges where the activity has been going on for a long time and the legal framework has been there to prosecute it, and now you have the evidence that can be effective.”

For Jeffrey Drazen, the more lawyers working on marine issues he believes are planet-altering—such as strip mining in Alaska’s Bristol Bay—the better.

“I don’t think we have enough legal protection for the oceans,” says Drazen, a marine biologist at the University of Hawaii at Manoa in Honolulu. “We have frameworks in place, but a lot of activities are quickly approved without enough public consultation—largely because it’s not required. Also, for most people, the ocean is out of their minds.

“But the ocean holds a considerable amount of resources this world uses, and it provides ecosystem services we can’t live without. We need to be looking after the sustainable use of the oceans.”

This article originally appeared in the July 2015 issue of the ABA Journal with this headline: “Sea Change: New law firm won’t make waves like the protest group.”