Show Me Your ID: Cops, Courts Re-evaluate Their Use of Eyewitnesses 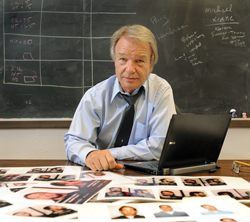 Gary Wells of Iowa State University has studied problems with police lineup procedures for 35 years. He says that the progress made in the past few years has been remarkable, “like a runaway train.” Photo courtesy of Gary Wells.

After more than three decades of laboratory studies, experts have found that a few simple changes in police lineup procedures improve the accuracy of eyewitness identifications.

For example, having someone administer the lineup who doesn’t know who the real suspect is can prevent inadvertently influencing the witness’s pick. And telling the witness that the perpetrator may not be present in the lineup lessens the chances that the witness will feel compelled to identify a suspect.

Police departments have been reluctant to act on the recommendations. But that is changing. One-quarter to one-third of all police departments now use the double-blind, sequential approach, according to some estimates, and their ranks appear to be growing every day.

Two states—New Jersey and North Carolina—require that all lineups be conducted sequentially and using a double-blind method, where the administrator does not know which person is the suspect. So do many local law enforcement agencies, including some of the nation’s biggest police departments.

Gary Wells, an Iowa State University psychology professor who’s been studying problems with police lineup procedures for 35 years, says the progress made in the past few years “seems like a runaway train” compared with what he witnessed during the first 30.

In the past year:

• The New Jersey Supreme Court issued a landmark ruling on the use of eyewitness identification evidence at trial.

• A new field study of police lineup procedures confirms what scientists like Wells have long been saying.

• And the U.S. Supreme Court heard its first case on eyewitness identification evidence in 34 years.

“We still have a long way to go,” Wells says, “but we’re definitely making headway.”

Last June, Texas joined nine other states in enacting legislation requiring all local law enforcement agencies to adopt written procedures addressing such things as who should administer the lineup and what kind of instructions the witness should receive. At the time, 88 percent of those agencies had no written procedures for conducting lineups. The written policies must be adopted by Sept. 1.

That Texas, known as a strong law-and-order state, has reformed its lineup procedures should help persuade other jurisdictions, Wells and other reform advocates say. “If we can get that kind of reform in Texas,” Wells says, “we can get it anywhere.”

The Texas legislation was followed in August by a landmark New Jersey Supreme Court ruling laying out sweeping changes in the way eyewitness ID evidence is handled at trial.

Larry Henderson was convicted of manslaughter in 2004 after an eyewitness identified him in a lineup as an accomplice to a murder. Henderson contended that the witness—who initially couldn’t identify the murderer’s accomplice in a double-blind lineup—was pressured into identifying him by the two officers working the case. The officers admitted speaking with the witness between lineups but said they were only trying to “reassure” him that he and his family would be protected if he made an identification.

The New Jersey court, in a unanimous 134-page opinion, said the case showed that the existing standard for assessing eyewitness identification evidence, based on a 1977 U.S. Supreme Court ruling in Manson v. Brathwaite, didn’t offer an adequate measure of reliability or sufficiently deter police misconduct.

Instead, the New Jersey court spelled out a new set of rules that makes it easier for defendants to challenge the reliability of an eyewitness identification and requires juries to be instructed on a range of variables that could lead to a mistaken identification.

While the decision applies only to New Jersey, experts believe it will have a major influence on courts nationwide. The ruling was based on a lengthy report by a retired appeals court judge and court-appointed special master, who held 10 days of evidentiary hearings and reviewed more than 200 scientific studies, articles and books on the subject.

Wells, one of seven experts who testified during the hearings, calls the decision the most comprehensive treatment any court has ever undertaken on the subject. “No court has ever taken this matter so seriously,” he says, “or delved into it as deeply as this court has.”

University of Virginia law professor Brandon Garrett, whose recent book, Convicting the Innocent: Where Criminal Prosecutions Go Wrong, was cited in the opinion, says the decision could serve as a model about how eyewitness identification evidence should be handled.

But Garrett says that will depend on the quality of the revised jury instructions that the court ultimately approves. Those instructions, which are still being drafted, are supposed to address all of the factors that could affect reliability, from lighting and distance to the amount of stress involved and whether a weapon was present. Once adopted, they’re supposed to be given whenever an identification becomes an issue.

“If the instructions turn out to be vague or inadequate, then the approach this court is taking may not be very successful,” he says.

Fresh on the heels of the New Jersey court’s decision came a new study comparing the effectiveness of the two lineup methods in the field. The results confirm what researchers have long been saying: While the two approaches yield about the same rate of accurate identifications, the sequential approach produces significantly fewer mistaken IDs than the simultaneous one.

The American Judicature Society-sponsored study, led by Wells, was based on an analysis of more than 850 lineups conducted over a three-year period by four metropolitan police departments. All the lineups were administered blindly on laptop computers using a software application that randomly assigned the lineup procedure used and the order of the suspects’ photos.

Wells says the results may help persuade some police departments that have yet to adopt the sequential approach that there’s no reason not to. “It should reassure them that they’re not going to lose any suspect picks,” he says, “and they’ll get fewer filler picks as well.”

Wells may first have to persuade his fellow researchers, who say it’s not clear from the studies whether sequential lineups are superior to simultaneous ones in the real world, where the ratio of innocent to guilty suspects is unknown, or whether a blindly administered lineup produces fewer mistaken identifications than a nonblind one.

“The people who are pushing these so-called reforms are way out in front of the science on this,” says Roy Malpass, a psychology professor who runs the eyewitness identification research lab at the University of Texas at El Paso.

It was against that backdrop that the U.S. Supreme Court heard arguments last November in Perry v. New Hampshire, its first case on eyewitness identification evidence in 34 years. The issue there was whether an accused burglar had a right to a pretrial hearing on the admissibility of an eyewitness identification made at the scene of a crime under suggestive circumstances that weren’t necessarily the fault of the police.

Barion Perry had been identified by a resident of an apartment complex as the black man she saw breaking into cars in the parking lot of her building early one morning. She was viewing the scene from her fourth-story kitchen window more than 100 feet away. Perry, the only black man at the scene, was standing next to a police officer at the time. (The woman was unable to identify Perry in a lineup.)

The court, in an 8-1 January ruling, acknowledged some of the shortcomings of eyewitness ID evidence. But the majority said it saw no reason to treat that evidence differently from other types of potentially unreliable evidence, such as testimony from a jailhouse snitch, absent police misconduct.

Wells, who was hoping the court would offer some substantive solution to the reliability problems in eyewitness identification evidence, is pleased that a majority of the justices seemed to recognize how flawed it can be. But he hopes he doesn’t have to wait another 34 years before the court decides to revisit the matter.