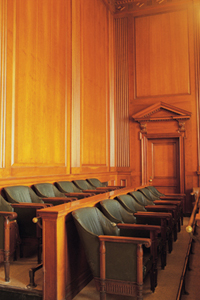 Earlier that morning, trial court judge Harold E. Eaton Jr. had taken stock of his diminishing jury pool and feared he’d be unable to seat a complete panel for the criminal trial of a local man. “It was one of the oldest cases on the docket, and it needed to be heard,” Eaton says. So he issued a summons for talesmen—essentially qualified members of a jury panel recruited from the general public—and dispatched deputies to roam several locations. It took about 20 minutes for the reinforcements to start arriving.

Holly Mae Hall was one of them—nabbed in front of the post office. “I was running errands for my mother and this stopped it all, but it was cool,” says the stay-at-home mom. (Deputies did, however, allow her to mail her letters before reporting to the courthouse.) “I wasn’t upset, but I was surprised because I didn’t think they could just take people off the streets.”

In fact, it’s something judges have been doing for 200 years, says Duke University law professor Neil Vidmar. “It was especially popular in the early days of the republic, when the Virginia gentry were the people called to jury duty; because they had to appear at their own expense and pay for their own lodging, oftentimes they didn’t show up or they didn’t stay,” says Vidmar, co-author of the recently released book American Juries: The Verdict. While less common today, he says, the practice does pop up “every once in a while.”

Tales (as they’re also called) were likewise corralled this winter in Colorado, where Weld County court officials conscripted residents of Greeley three times between December and January—the first such instances in about 15 years, according to news reports. A similar roundup was held last July in Sanford, N.C.

Do unsuspecting errand-runners everywhere have something to fear? Probably not, says Gregory S. Hurley of the National Center for State Courts’ Center for Jury Studies. He calls the Vermont and Colorado occurrences random, and he believes their proximity in time to be mere coincidence. More common, he says, is for a judge to declare a mistrial and reschedule. He’s also seen court clerks pick up the phone to give no-shows a wake-up call. What will be interesting, he adds, is “to see whether these cases withstand appeals.”

That’s cold comfort to Rosalee Rice, who lives in Greeley and was buttonholed on her way to work in one of the Weld County sweeps. “I don’t have a problem doing jury duty, but I need to be able to plan my day and get coverage for my classes,” says the full-time student and medical office staffer. “I tried to argue, but [the police officer] just got upset with me. He told me that I could go nice or I could go to jail.”

But in Vermont at least, the mood was accepting. “We have a lot of blessings in this country and one of the few responsibilities is jury service,” says Eaton. “Most people understand that and are quite gracious when we get into these situations.”