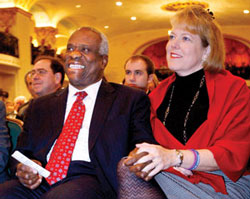 U.S. Supreme Court Justice Clarence Thomas (with wife, Virginia) has been called upon to recuse himself along with Justice Elena Kagan (pictured below) from the health care case. Photo by AP Photo/Charles Dharapak.

Once the U.S. Supreme Court hears arguments in the historic federal health care case this month, the clamor over calls for the recusal of two justices may subside.

Nevertheless, the debate will likely continue, say supporters for clearer rules to govern when justices should stay with a case and when they should go.

“It’s hard, if not impossible, to make good public policy out of a topic that’s so controversial,” says Jeffrey W. Stempel, a law professor at the University of Nevada, Las Vegas, who has written extensively about recusal.

Critics all along have dismissed as unadulterated politics efforts by members of Congress and outside interest groups to unseat Justices Clarence Thomas and Elena Kagan for perceived conflicts of interest. The critics say the politicians really just want to affect the outcome.

But recusal isn’t about Thomas, Kagan or their presumed health care votes. Rather it concerns ensuring fair treatment in the court. (For more on recusal, see “Show Me the Money.”)

And talk of recusal in a health care context can only go so far anyway, as neither the parties nor a sizable crowd of amici have raised it in Florida v. Department of Health and Human Services, virtually guaranteeing the subject won’t reach the justices. Oral arguments are scheduled for March 28.

While the vote in the health care decision may divide the court, the justices appear united when it comes to recusal, sometimes called judicial disqualification. In recent months Chief Justice John G. Roberts Jr. and Justice Stephen G. Breyer have publicly backed the court’s recusal practice, which leaves the decision to withdraw to individual justices, and regards statutes and rules that bind the lower courts as merely advisory.

And at least in the highest court, the “duty to sit” appears alive and well. Congress abolished nearly 40 years ago the discredited principle that a judge must stay with a matter despite ethical conflicts if recusal means the case goes unheard.

As oral arguments approached, neither Thomas nor Kagan showed a sign of budging. Both presumably already had participated in votes on the health care cert grant and preliminary orders.

Congressional Democrats and interest groups say Thomas should step aside because of the work by his wife, Virginia, with conservative groups opposed to the health care overhaul. Thomas had to amend more than 20 years of required financial disclosure forms to reflect his wife’s income from those groups, and Democrats called for a U.S. Department of Justice investigation.

They also want legislation that would apply the Judicial Conference Code of Conduct for United States Judges to Supreme Court justices and force them to publicly explain recusal decisions, regardless of whether a motion is granted or denied.

Republicans say Kagan should pull out because they worry she may have discussed possible health care litigation in her 14 months as solicitor general before arriving on the court in October 2010. Though Kagan has denied meaningful participation in the discussions, she has recused herself from dozens of other cases she worked on as solicitor.

The Republican-controlled House Judiciary Committee also became locked in a fight with the Justice Department after Attorney General Eric H. Holder Jr. refused to surrender documents the lawmakers hoped would reveal a conflict and kick Kagan out.

Critics worry that such heavy-handed tactics would harm judicial independence long after the health care litigation has run its course.

“I think some of this stuff is just a cynical attempt to win political points,” says Adam Skaggs, senior counsel at the Brennan Center for Justice in New York City. He tracks issues involving the courts, money and politics.

An existing federal statute applies to Supreme Court justices and appears to cover a wide range of conflicts, but the court historically has interpreted the statute tightly. The justices say it applies only in situations where lawyer-relatives have active cases before the court, or when justices stand to benefit financially. The current statute already expressly identifies justices and requires recusal from “any proceeding in which the judge’s impartiality might reasonably be questioned.”

The broad provision was supposed to make it easier for judges to withdraw rather than fall back on an overly restrictive duty to sit. Jurists typically have interpreted it as forcing them to continue on a case rather than succumb to compelling ethical conflicts that should disqualify them.

“The justices have interpreted this unduly narrowly,” Stempel says. Some federal courts persist in relying on the duty to sit, even though it is now the minority rule, he says. Stempel also estimates that at least a half-dozen states continue to embrace it, and that as many as 20 remain divided or undecided.

Congress revoked the duty in 1974, two years after then-Associate Justice William H. Rehnquist used it to remain in a controversial Vietnam-era case accusing the Army of spying on civilians. The Supreme Court is different, Rehnquist and his successors say, because its decisions are unreviewable and no other jurist can replace a disqualified justice. Sen. Patrick Leahy, D-Vt., however, has introduced a bill that would replace recused justices with retired ones.

“Even one unnecessary recusal impairs the functioning of the court,” Chief Justice Rehnquist wrote in a 1993 policy statement signed by six colleagues.

Though the Constitution gives Congress broad powers to create and govern the lower courts, the justices say they are different because the Constitution creates only “one supreme court.” While lower courts may have no problem replacing disqualified judges—whom Breyer has called “fungible”—the justices say a recusal at their level deprives litigants of a full court. Also cited is the prospect of a tie vote with only eight justices, which leaves the decision below intact but sets no precedent.

“It’s a different thing … being a Supreme Court justice,” Breyer told the House Appropriations Committee in April last year. “You have a duty to sit because there is no one to replace me if I take myself out, and that could sometimes change the result.”

Roberts used the same argument in his 2011 Year-End Report on the Federal Judiciary. If a justice “withdraws from a case, the court must sit without its full membership.”

Some of those arguments ignore history. For example, Congress changed the number of justices six times before settling on nine in 1869. Except for Thom as, compliance with financial disclosure laws appears to present no problem.

And the prospect of 4-4 splits is rare, despite a handful of cases in which justices were publicly excoriated for recusal decisions, according to research by the Washington, D.C.-based Alliance for Justice, an organization of more than 100 groups working to ensure federal judicial fairness and independence. In cases involving a recused justice after the 1974 enactment of the modern statute, only 32—fewer than 6 percent—of 567 decisions have ended in 4-4 ties.

“That’s a small price to pay for greater confidence in impartiality,” Stempel says.

Nine state supreme courts, however, use recusal procedures under which a justice who initially denies a recusal request must step aside while the remaining justices ultimately decide the motion. Though governors appoint substitute justices in most of the states, at least two—Georgia and Vermont—allow the courts to designate replacements.

Moreover, such practices typically arise from the courts themselves in the judicial rule-making process, rather than in legislatures. Proponents say that puts them on constitutionally firmer ground than congressionally inspired attempts to force a system on the U.S. Supreme Court as a separate and co-equal branch of government.

The justices likely would not go quietly if Congress passed and the president signed a new recusal statute addressing them. Because the road ends at the court’s door, folks may have a chance to see whether the duty to sit has any gas left in the tank.

Besides the argument revolving around one supreme court, which few outside the court take seriously, the justices have a separation-of-powers argument that could serve as just the bludgeon they need to beat back attempts to change the way they do business.

Says Cornell University law professor Michael C. Dorf, who has written in support of Leahy’s bill, “You’ve got to deal with the fact that the Supreme Court is still different.”