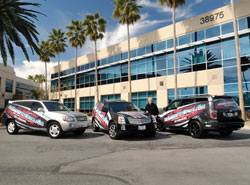 Murrieta, Calif., solo Lorene Mies has turned her black Cadillac SUV into a roving commercial for her law practice. The car is boldly emblazoned with details about her firm and Web address, thebankruptcyminute.com. On any given Saturday, the vehicle might be parked for the day in the lot at a nearby Costco, where it draws the attention of shoppers.

“I don’t know if this would play well in Beverly Hills or Westwood,” says Mies, a former public defender who reinvented herself in 2009 to meet growing demand for bankruptcy services.

Mies paid about $2,600 to have the large ad—basically a giant decal—wrapped around her car. She saw immediate results. Moments after driving away from the business where her car was wrapped, her cellphone rang. The caller was driving behind her and happened to be in need of a bankruptcy attorney. Mies says she has seen such success from the mobile promotion that both her daughter and her case assistant now drive cars wrapped with ads for her firm.

“You have to identify with your market,” says Mies, whose community is located between Los Angeles and San Diego. “Who are these people? They’re blue collar, they gamble, they ride Harleys. I’m driving a heavily tattooed, detailed car; it appeals to who they are.”

Some might consider it déclassé, brash or simply vulgar for lawyers to promote their services using such in-your-face methods. Nevertheless, vehicle wrapping has caught on, and attorneys around the country are embracing car promotions as a cost-effective form of marketing. 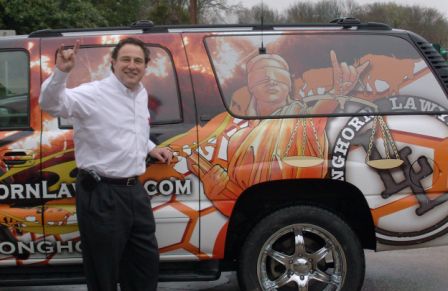 “You’d easily pay two or three grand for a billboard in a prime location,” says Jeff Weinstein, aka the Longhorn Lawyer, who advertises on his Chevy Suburban. “What better way to promote our law firm and my love of the Texas Longhorns?”

Weinstein, who runs a personal injury practice about 75 miles southeast of Dallas in Athens, has long been a proponent of vehicle advertising. His dad promoted Weinstein’s Pharmacy on the side of Ford Pintos.

“I kind of grew up with it,” says Weinstein, who says he is planning to purchase a 40-foot Prevost bus, wrap it and take it to local events. “I love the reaction from people—good, bad or indifferent.”

Will Hornsby, staff counsel with the ABA’s Division for Legal Services, says vehicle advertising may reach consumers who are unfamiliar with lawyers or the procurement of legal services. “It’s the demographic of people that have legal problems but may be a little harder to reach,” says Hornsby, noting that some states require disclaimers that might be hard to include on a vehicle ad. “Lawyers go to where the clients are.”

Even those attorneys who don’t favor the direct approach believe that a car can be a useful medium for a message. Alan Telisman, a personal injury attorney in Miami, provides clients with bumper stickers imploring: “Don’t text & drive.” His firm’s name, Gross & Telisman, appears alongside the message in smaller type.

“Obviously we’re hoping we can pick up a few clients here and there,” says Telisman. “The real purpose is public awareness.”

Weinstein, who jokes that his wife refuses to drive with him in his wrapped car, says he believes other lawyers need to loosen up.

“I have people that come up to me and say it’s an embarrassment for the profession,” he says. “I say, ‘Maybe we shouldn’t be so serious all the time.’ ”