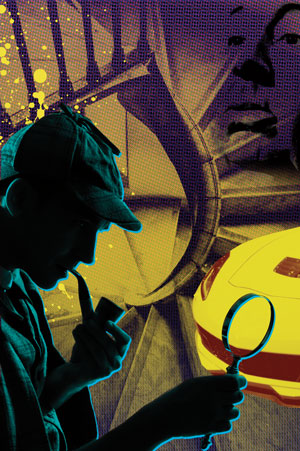 “North Philly, May 4, 2004. Officer Sean Devlin, narcotics strike force, was working the morning shift. Undercover surveillance. The neighborhood? Tough as a $3 steak. Devlin knew. Five years on the beat, nine months with the strike force. He’d made 15, 20 drug busts in the neighborhood.

“Devlin spotted him: a lone man on the corner. Another approached. Quick exchange of words. Cash handed over; small objects handed back. Each man then quickly on his own way. Devlin knew the guy wasn’t buying bus tokens. He radioed a description and Officer Stein picked up the buyer. Sure enough: three bags of crack in the guy’s pocket. Head downtown and book him. Just another day at the office.”

The issue was whether police officer Devlin had probable cause to arrest the defendant. The Pennsylvania Supreme Court had said no—” ‘a single, isolated transaction’ in a high-crime area was insufficient to justify the arrest, given that the officer did not actually see the drugs, there was no tip from an informant, and the defendant did not attempt to flee.”

Roberts said yes. Roberts borrows the hard-boiled stylistic voice characteristic of detective mysteries. Just a playful hook? A gimmick? Yes and no. Roberts uses concrete, hard-edged words and compact sentences with no subordinate clauses or other convolutions to get in the way. Sentence fragments. A faux detective-mystery writer, Roberts uses language that stays on the surface of the events he describes. Roberts’ point? Detectives solve mysteries by going beneath these surfaces, decoding clues, finding what lurks in murky shadows. So do lawyers.

As novelist David Lodge observes about the satisfactions provided by solved mystery stories in both fiction and in law: “A solved mystery is ultimately reassuring to readers, asserting the triumph of reason over instinct, of order over anarchy.”

The inquest. Unlike Roberts’ story fragment, detective mysteries are not usually solved in the “real time” of the initial commission of the crime. In traditional mysteries, the crime has already occurred. To solve the mystery, the detective goes back in time, retracing the footsteps of the criminal. Narrative theorist Peter Brooks observes that it is “a condition of all classic detective fiction that the detective repeat, go over again, the ground that has been covered by his predecessor, the criminal.”

Likewise, lawyer-detectives must return to the past, investigate and formulate theories supported by evidence reshaped into complex and compelling stories. For courtroom lawyer-detectives, removed in time and spatially separated from the events depicted, it is especially difficult to decode clues, reconstruct the past and present the solutions to our mysteries.

Sherlock Holmes presents the problem this way: “The principal difficulty … lay in the fact of there being too much evidence. What was vital was overlaid and hidden by what was irrelevant. Of all the facts which were presented to us, we had to pick just those which we deemed to be essential, and then piece them together in their order so as to reconstruct this very remarkable chain of events.”

“Official stories” that get it wrong. In many detective stories, the need for narrative closure and certainty leads initially to wrong solutions. Brooks calls this “premature closure.” Typically, an erroneous “official” story blocks the detective from apprehending the true culprit.

What do I mean by official story? Here is an example that came up in my criminal law class: Recent recalls of General Motors cars have raised doubts about criminal convictions resulting from deaths in many serious car crashes involving GM cars. Often, defendants had claimed not to know exactly what had happened or that their cars had simply gone out of control. Defendants’ stories were discounted by police investigators, prosecutors and juries. Defendants were convicted. Cases closed; stories officially over.

Investigative reporting now reveals that some of these “accidents” were caused by faulty ignition switches in GM cars that suddenly went into the accessory position, cutting off power in the steering and brakes. Air bags never deployed, resulting in horrific consequences for passengers in these cars. Proposed solutions to the mysteries now suggest the possibility of corporate villainy emerging from the shadows—a villainy that morphs from mistake into injustice and tyranny.

The identity of the villains and the characterization of villainy is crucial in detective mysteries. Alfred Hitchcock said, “The more successful the villain, the more powerful the story.”

The wounded detective. Among my favorite detective mysteries are Hitchcock’s movies. His plots are typically wedded to the fixed perspective of a central protagonist whom the camera tracks throughout the movie. His detectives are often afflicted by internal wounds distorting their perspectives, making them vulnerable to manipulation and complicit in constructing an erroneous official story. Think of Scottie Ferguson (Jimmy Stewart) in Vertigo. Ferguson suffers from vertigo and acrophobia (fear of heights), guilt about his culpability for the death of a police officer, and a romantic obsession that is artfully manipulated by the villain and forces of villainy. Ferguson misconstrues evidence and is complicit in constructing an erroneous explanatory “official story” that he must later correct by solving the mystery.

For Hitchcock’s detectives, as depth psychologist James Hillman observes, “the wound and the eye [that is, perspective] are one and the same.” Hitchcock’s mysteries provide cautionary warnings for lawyer-detectives—reminding us how our perspectives are shaped by who we are, the roles we play and where we stand—literally and figuratively—in relationship to what we look upon.

Consider a short version of a legal detective mystery adapted from a convict’s post-conviction brief to the U.S. Supreme Court. First the background: In the 2000 case Williams v. Taylor, Michael Williams was convicted of capital murder for crimes he committed with an accomplice, Jeffrey Cruse. The crimes were horrific. Armed with a .357 handgun, the pair invaded a home, committed a rape and two murders, and set the house on fire to cover their crimes. At Williams’ trial, Cruse testified that Williams committed the actual murders, while Williams placed the blame on Cruse. In Virginia, only the “trigger person” is subject to the death penalty. The jury believed Cruse. Williams was convicted and sentenced to death, his appeal was denied, his state post-conviction petitions were unsuccessful. The official story was over. Case closed. But was it?

Throughout state post-conviction proceedings, Williams had been denied discovery, investigative resources and an evidentiary hearing. In federal post-conviction proceedings, an investigator was finally appointed and discovered: (1) the prosecutor failed to disclose a sentencing deal with Cruse sparing him from the death penalty and also a pretrial psychiatric report on Cruse that could have been used to impeach Cruse’s trial testimony; (2) the forewoman of the jury falsely stated on voir dire that she was not related to any of the prosecution’s named trial witnesses and had not been represented by any of the trial lawyers—even though she had been married to one of the investigating officers who would testify at trial and the assistant prosecutor had represented her in her divorce from the witness; and (3) the assistant prosecutor committed misconduct when he failed to reveal this information to the defense.

Now the plot thickens: The federal district judge ordered an evidentiary hearing on these claims. But the 4th U.S. Circuit Court of Appeals at Richmond, Virginia, held that the hearing was prohibited by the Antiterrorism and Effective Death Penalty Act, which provides that if a federal habeas petitioner has “failed to develop the factual basis of a claim in state court proceedings,” a federal habeas court “shall not hold an evidentiary hearing on the claim” regardless of the reasons for this failure.

How did Williams’ post-conviction lawyers “hook” the Supreme Court and overcome procedural inertia? The brief presents a complex detective mystery; of course, it is a factually meticulous and truthful story. First, the lawyer-detective—post-conviction counsel—uncovers clues. Who are the villains? Cruse and the juror-foreperson who had denied having personal and professional relationships with named trial witnesses and the prosecutor. And the prosecutors for con-cealing a plea bargain, hiding psychiatric materials and then moving Cruse to an out-of-state prison. The Virginia trial courts for denying motions for discovery, investigative funds and an evidentiary hearing. Finally, procedural injustice morphs into tyranny, suggesting the identity of a legal mastermind behind it all: The 4th Circuit ratifies the cover-up ruling that the “failed to develop” language in the AEDPA prevents an evidentiary hearing.

Who is cast into the role of the heroic legal detective? The justices of the Supreme Court. For only by solving the mystery of a crucial clause of that act and reopening the official story can the detective mystery be solved, unanimously affirming the value of procedural due process.