Space law is taking off 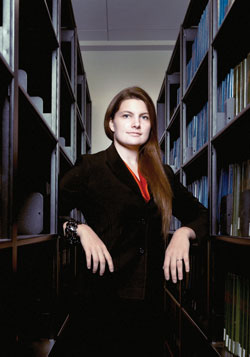 Maria-Vittoria Carminati: “Space tourist flights are scheduled to start in the next few years at $90,000 to $200,000 a seat.” Photo by Jack Thompson.

Space is no legal vacuum: As extraterrestrial adventure changes from government goal to private enterprise, new opportunities in space law are emerging for the interplanetarily inclined.

“We are at the very beginning of a completely new, very sexy and incredibly challenging industry that will push the limits of human ingenuity,” says Jenifer K. Lamie, co-author of The Laws of Spaceflight. “If we can tailor the laws regulating the industry to foster growth—without being too overly sensitive to the inherent risks involved—I don’t see any limits to what we can accomplish in the future.”

The need for lawyers as equally at home with a rocket docking as they are with rocket-docketing will initially be driven by space tourism.

“Flights are scheduled to start in the next few years” at $90,000 to $200,000 a seat, says Maria-Vittoria “Giugi” Carminati, a Houston-based associate at Weil, Gotshal & Manges and another co-author of the book. That unprecedented access is triggering a need for attorneys to sort out protections, regulations and guidelines for those who “light the candle,” as well as for the grinning billionaires who will be rocketing to the great beyond.

“Space law governs the licensing of launches, launch vehicles and launch sites,” Carminati says. “Space law also governs spaceflight participants, for example, by requiring informed consent by spaceflight participants before they can be carried by a commercial spaceflight operator. And space law also creates a risk-sharing regime where the government and private operators share the risk of operations. These three are just examples, but they underscore just how important space law is to space tourism.”

While the rest of us mere mortals will be left to watch in wonder, the transformation of outer space into a playground for the uber-rich ultimately should generate even more career niches for space lawyers, experts say.

“The novelty of suborbital flights will hopefully fuel technological advances and financial support in both further-reaching space exploration available to the public—beyond suborbital—as well as faster transportation for international travel,” Lamie says. “If the industry can connect the fun element of space travel to the functional element of space transportation, I think the industry will absolutely flourish, just like with commercial aviation.” Lamie, now a judge advocate for the U.S. Army stationed at Joint Base Lewis-McChord, Wash., notes that her comments are not related to her military service.

Frans G. von der Dunk, a professor of space law at the University of Nebraska-Lincoln, agrees: “Space tourism, strictly speaking, will presumably level off after a few years.” Companies such as Virgin Galactic and XCOR Aerospace’s Space Expedition Corp., however, are aware of that, he says. “They hope that by the time it really levels off, they have enough positive experience with the technology to start using it for hypersonic transport,” say for a flight from New York to Tokyo in an hour.

And in terms of precious metals, things should get very interesting in about 20 years when the prospect of mining in space will no longer be a fool’s dream.

“It is said that the moon is awash with helium-3 [a nonradioactive isotope used in nuclear fusion]—34 tons of which would suffice to power the United States for a full year,” von der Dunk says. “And some asteroids are estimated to contain trillions of dollars’ worth of platinum-group materials.” The six platinum-group metals are iridium, osmium, palladium, platinum, rhodium and ruthenium.

International agreements are very clear when it comes to nations that scheme to lay claim to celestial treasures: It’s against the law. Less clear, though, is the legality of a company, or even a private individual, coming out with a press statement along the lines of “That platinum asteroid over there is mine.”

“Space is legally akin to a global commons,” Lamie says. “Often space law experts use the high seas to compare with unanswered legal questions in space.” And since it’s legal for anyone to catch a fish on the open seas, it may be just as legal for a starship trooper to snatch up a little platinum here or a little helium there.

And if you’re looking to mix with the legal Luke Skywalkers of tomorrow, you’ll need good legal chops. And you’ll need to know the language. “Make sure you have at least a general understanding of the technology,” von der Dunk says. “You do not need to be able to build a satellite yourself. But to generally know what it can and cannot do is indispensable.”

Adds Matthew J. Kleiman, corporate counsel at the Charles Stark Draper Laboratory in Cambridge, Mass., “I tell people to gain a skill in a more traditional area of law that would be valuable to a space company, such as IP, international trade [or] corporate finance. Once you have an expertise in that area, then specialize your practice on space issues.”

You’ll also want to stay current on your planet of origin.