Speakers consider the grand sweep of the Great Charter 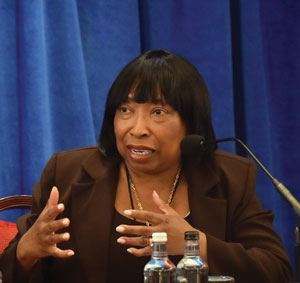 As with most historical occasions, the Magna Carta’s birthday was a time for looking back at what could have been and forward at what may be in the future.

At an early program of the 2015 ABA London Sessions, the question pondered was: What if King John had decided to stick it to his nobles and not affix his seal to the Magna Carta?

Jonathan Turley, a law professor at George Washington University School of Law and high-profile legal commentator, moderated the panel that included Lord Justice Christopher Clarke of the Court of Appeal in the United Kingdom; Judge Bernice B. Donald of the Cincinnati-based 6th U.S. Circuit Court of Appeals; Judge Delissa Ridgway of the U.S. Court of International Trade; and Ian Williams, a University College of London lecturer.

The panelists kept the audience engaged by positing several counter-factual hypotheticals and asking those in attendance to vote via remote control on whether they believed something would still have occurred had the Magna Carta not been issued. The panelists seemed fairly confident that several important principles of common law, namely trial by jury and the adversarial system, would still exist. Williams noted that, before jury trials became the norm, defendants were usually subjected to trial by ordeal (e.g., if she sinks, she was innocent; if she floats, she’s a witch).

“The main reason we lost trial by ordeal wasn’t necessarily due to Magna Carta,” Williams said. “The Vatican forbade its priests from taking part, and they were a necessary part of trials by ordeal.”

As for the adversarial system, there was more of a split between panelists. Williams said England’s chancery and equity courts at common law were inquisitorial in nature and were quite effective in resolving cases quickly. Donald pointed out that while the adversarial system is fundamental to the U.S., fewer cases are going to trial. And Clarke posited that European attorneys would probably prefer an adversarial system, noting that lawyers can only address the court for a limited amount of time.

But it wasn’t all about the abstract. Noting the role that King John’s failed military campaigns against France had played in bringing about the Magna Carta in the first place, Clarke made sure to emphasize what might be the biggest counterfactual hypothetical regarding what would happen had it never existed.

An all-star panel at a later session discussed the enduring influence of the Magna Carta in its birth country, as well as the United States and the rest of the world.

The panel was moderated by A.E. Dick Howard, a professor at the University of Virginia School of Law, The panelists were Richard Goldstone, former justice of the Constitutional Court of South Africa; Lord Igor Judge, former chief justice of England and Wales; Baroness Patricia Scotland of Asthal, the former attorney general for England and Wales; Diane Wood, chief judge of the 7th U.S. Circuit Court of Appeals at Chicago; and Sir Robert Worcester, deputy chairman and trustee of the Magna Carta Trust and chair of the Magna Carta 2015 800th Anniversary Commemoration Committee.

“The Magna Carta impacts the lives of nearly 2 billion people in over 100 countries around the world,” said Worcester, who was awarded the ABA Presidential Citation by President William C. Hubbard prior to his remarks. “It’s influenced the Declaration of Independence and the U.S. Constitution. Eight of the first 10 amendments to the Constitution were derived from the Magna Carta.”

That’s not bad for a document that, by all rights, should have had as much impact as a blank sheet of paper.

“Magna Carta never had a future—the king had no intention of abiding by it,” Lord Judge said. “Yet it has endured for 800 years so far. There’s a reason, and it’s in the words you find in the charter. We’re so privileged that we take them for granted: justice, right, liberties, security, lawful judgment and the law of the land.”

Another reason it has lasted as long as it has is the exportability of its values.

“The Magna Carta’s ideas were infused and incorporated into American constitutionalism,” Howard said. “You then had an export of these ideas to other countries. In many cases, these ideas were accepted; in other cases [they were] rejected. But it’s interesting how often the American experience has framed the debate for so many other countries.”

In looking toward the next 800 years, it’s important to remember what happened in the first year. Judge Wood talked about how the barons thought they had cornered King John, but had a rude awakening once the king had Pope Innocent III invalidate the charter within a month after issuing it.

“We know from the history of the Magna Carta that only eternal vigilance will keep it alive,” Wood said.

Lord Judge agreed, saying: “Magna Carta only has a future if we believe in it.”

This article originally appeared in the August 2015 issue of the ABA Journal with this headline: “What-Ifs and What Could Be: Speakers consider the grand sweep of the Great Charter.”