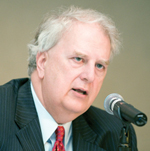 The scramble by state governments to make ends meet under the financial squeeze of the recession is causing the fissures that sometimes come between the three branches—executive, legislative and judicial—to open a little wider and to be a little more jagged than they are during less stressful times.

“States need to find places where they can plug their budgets, and they’re pretty much out of ways to do it,” said Susan K. Urahn, managing director of the Pew Center on the States, at a recent gathering convened to discuss preserving independence and impartiality of courts in the face of budgetary and other pressures.

The theme of the national summit—held May 7-9 in Charlotte, N.C.— was “Justice is the business of government.” It was spon­sored by the ABA Presidential Commis­sion on Fair and Impartial State Courts in cooperation with the National Center for State Courts. The commission was appointed by ABA President H. Thomas Wells Jr., a partner at Maynard, Cooper & Gale in Birmingham, Ala.

The implications for courts in states facing budget crises could be profound. While calls for greater collaboration between the branches received widespread support from attendees at the summit, some speakers said accomplishing that goal will require chief justices and other members of the judiciary to engage in more outreach with representatives of the other branches. Judges also must be more visible advocates of justice programs without compromising their impartiality on the bench, some speakers suggested.

“Just because you’re a judge does not mean you should act like a monk,” said Roy E. Barnes, a member of the Georgia General Assembly for nearly a quarter-century before starting a four-year term as governor in 1999.

The battle for budget dollars increasingly is a source of friction between the government branches, Barnes said. A case in point, he said, is defense services for indigents in criminal cases.

“What’s happening in indigent defense in this country is abominable,” said Barnes, who heads the Barnes Law Group in Marietta, Ga., and has announced he is running for governor of Georgia again. “Each one of us should hang our head in shame.”

Georgia, he said, “has taken money from pub­lic defender programs and allocated it to other things. That’s wrong.”

Sentencing and incarceration of convicted criminals also are budgetary sore points, Urahn noted. She cited findings in a March Pew report that corrections ser­vices cost the states more than $50 billion a year and consume $1 out of every $15 in discretionary funds available to the states. But legislatures that cut funding for corrections ser­vices, Urahn said, are likely to see problems in the area get worse.

The judiciary now must be more prepared than ever to justify its budget requests, said David Adkins, executive director and CEO of the Council of State Governments, based in Lexington, Ky.

“Merely advocating for the courts as they are may be inadequate,” Ad­kins said, “when so many people feel disenfranchised from the process.”

Just as some speakers urged the judiciary to become more active at the policy level, there were warnings that the credibility of the courts in the public mind may be crumbling on another front as judicial elections—held in some form in 39 states—become increasingly costly and contentious.

In her speech, O’Connor didn’t come out against judicial elections, but afterward she told the ABA Jour­nal, “They’re awful. I hate them.”

O’Connor’s concerns about judicial elections were echoed by constitutional law expert Erwin Chemerin­sky, who addressed a dinner for summit attendees. Chemerinsky also is dean of the law school at the Uni­versity of California at Irvine.

Both O’Connor and Chemerinsky pointed to a case before the U.S. Supreme Court, Caperton v. Massey Coal Co. (PDF), as an example of how judicial elections can undermine public confidence in the courts.

In Caperton, a party in a business dispute in West Virginia poured funds into the campaign of a can­didate running for election to the state supreme court. After that candidate was elected, he provided the deciding vote in a decision by the court that overturned a lower court ruling against his campaign contributor in the underlying business dispute. The newly elected justice also declined to recuse himself from the case. (See “Caper­ton’s Coal,” February.)

On June 8, the Supreme Court ruled 5-4 that the West Virginia justice should have recused himself, but Justice Anthony M. Kennedy’s majority opinion described the case as “exceptional” because of the size of the campaign contributions.

Chemerinsky said Caperton will raise questions about what the boun­daries of appropriate behavior should be for elected jurists.

Court decisions in recent years, such as the Supreme Court’s 2002 ruling in Republican Party of Minneso­ta v. White, have given judicial candidates more flexibility to speak out on issues that may come before them on the bench, noted Chemerinsky. Moreover, contributions and spending on judicial campaigns are skyrocketing, he said.

“The very nature of judicial elections has changed in the last dec­ade, and it has not been bene­ficial for judicial independence.”

But Chemerinsky said efforts to eliminate judicial elections probably are futile. He said it would be more realistic to seek stricter rules on judicial campaign contributions and spending, and clearer standards for judges on such issues as recusal and disqualification.

“We must work to avoid the growing partisanship in the courts,” said Rep. Joe Hackney, North Carolina speak­er of the House and president of the National Con­fer­ence of State Legis­lators. “Nobody is happy with the way we select judges,” he said, “but nobody has been able to come up with a viable alternative.”

MAKING A CASE FOR THE COURTS

In light of the broader challenges that state governments are struggling to address, it was a notable achievement for the summit to bring together representatives of all three government branches to spend the better part of three days focusing specifically on issues facing the courts. Chief justices or their proxies from at least 34 states attended the summit, but the executive and legislative branches also were well-represented among the 300 or so people in attendance.

Marshall and others made a strong case for the proposition that the courts merit special attention. Marshall said most people have their closest contact with state government through the courts. She noted that filings in federal courts during 2008 totaled 387,000, compared to 47.3 million filings in the state courts—and that number doesn’t include traffic violations.

“People often look to the courts as a place of stability, an anchor, in a very, very rough sea,” said Marshall.

Those contentions are supported by some of the findings in a survey (PDF) conducted earlier this year for the National Center for State Courts. The results are based on a national telephone survey of 1,200 adults conducted in February and March by Princeton Survey Research Associates.

In the survey—whose findings were reported at the summit—56 percent of the respondents said they have had some direct contact or involve­ment with a case in the state courts. And 74 percent said they have at least some confidence in the state courts to do their job effectively. By comparison, respondents gave confidence ratings of 71 percent to local government, 66 percent to state legislatures and 65 percent to governors.

A key challenge for state judiciaries will be to find ways to collaborate with representatives of other branches of state government to advocate for justice services at a policy level, without compromising impartiality when presiding over specific cases on the bench.

That won’t be an easy task, said Ruth V. McGregor, chief justice of the Arizona Supreme Court. If each branch is willing to reach out, she said, opportunities to make gains through collaboration are virtually limitless.

Wells endorsed that approach in his closing remarks to the summit attendees. “We have got to work together,” he said. “In order to have justice for all, we need all to be for justice.”