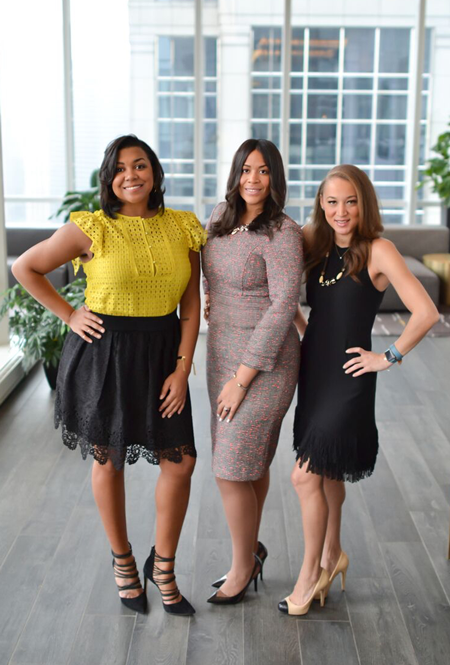 Yondi Morris-Andrews recalls the exact moment she decided to leave her position as a contract attorney at a BigLaw firm.

“I was in a meeting at a large law firm, and at the end of the meeting, one of the partners said, ‘OK, slaves, get back to work,’” recounts Morris-Andrews, who is African-American.

For Morris-Andrews, it was more than just a bad word choice: It was an indicator of a more systemic problem. At that moment, she knew it was time to leave.

That night, Morris-Andrews logged on to Twitter and in 140 characters announced that she was ready to start her own law firm.

“When I said it, I wasn’t really serious. I was just venting,” says Morris-Andrews. But her tweet resonated, and her friend Keli Knight immediately responded that she was also ready to strike out on her own. Mutual friend Jessica Reddick joined the conversation, and the three lawyers—all in their 30s—decided to form the Knight, Morris & Reddick Law Group, also known as KMR. The firm has offices in downtown Chicago and Los Angeles. KMR specializes in real estate, corporate law, estate planning and entertainment law.

“We pared our services down to the practice areas that we enjoyed, which inherently brought like-minded and complementary clients,” Knight says.

The partners also run KMR Legal Staffing, providing law firms and corporations with attorneys, paralegals and general office support for engagements ranging from document review to short-term and permanent placements. Having worked as a contract attorney, Morris-Andrews knew there were opportunities in that area.

Regarding legal staffing, Knight says, “What’s fulfilling is that we are able to offer work opportunities for people who may not have them otherwise.”

The trio built their businesses from the ground up, figuring out who their clients were and how to find them. Running a law firm has been a continuous learning curve and has also meant nonstop communication—with one another and their clients.

“It varies day by day; that is just the life of an entrepreneur. Things come up at all hours, and we have to make ourselves available to resolve any matter that presents itself,” Reddick says.

Despite the challenges, KMR has managed to thrive in a tough legal climate. And the team is grateful for the support they’ve received along the way, including meeting an early booster during a chance encounter on an elevator.

“I always make it my practice to be in networking mode,” Morris-Andrews says of her encounter with John Adams, who is a descendant of the country’s second president. The two stayed in touch, and later, Adams suggested she start her own firm.

“He would sit down with us and go over corporate documents. He became a mentor to us and was a very selfless person,” says Morris-Andrews, adding that Adams stated that he was aware of the historical oppression of African-Americans in this country, and he wanted to help. Adams, who works in corporate law, even surprised them with some seed money.

Hard work and support from mentors, friends and family have been the keys to their success. The partners recognize that being a woman- and minority-owned law firm sets them apart, and it sometimes means closer scrutiny.

“Obviously, this is a male-dominated field,” Reddick notes. “It is really important that we put out good work so that our reputation can stand on its own.”

So far, so good. KMR plans to expand by opening its third office in the nation’s capital, which also happens to be Reddick’s hometown.

This article appeared in the July 2017 issue of the ABA Journal with the headline “Startup Story: Black, female lawyers build their own success”