States keep mum on where lethal injection drugs are made 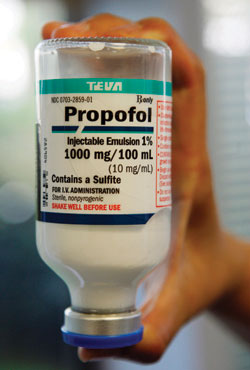 Missouri was to use the anesthetic propofol to execute a serial killer but had to switch plans after an EU protest. AP Photo/Richard Vogel File

Like other states with the death penalty, Missouri is facing a shortage of the lethal injection drug pentobarbital, primarily because its Danish manufacturer won’t allow it to be used in executions.

So when the state initially set an execution date for convicted serial killer Joseph Paul Franklin, officials announced that they would instead inject Franklin with a lethal dose of propofol, the same anesthetic that killed Michael Jackson.

But after the European Union threatened to limit shipments of propofol to the United States, as a protest against capital punishment, Gov. Jay Nixon had to order the state Department of Corrections to devise a different method of execution. A few weeks later, the state decided to use pentobarbital after all, and to obtain it from a compounding pharmacy, a company that manufactures the drug but without the same level of federal oversight as big manufacturers.

State officials refused to identify the pharmacy, triggering a last-minute flurry of legal activity. Franklin’s lawyers argued that he had the right to know where the pentobarbital was manufactured, especially given the publicized problems of compounded drugs. In 2012, a contaminated steroid made by a compounding pharmacy in Massachusetts resulted in 64 fatal cases of fungal meningitis.

Other death penalty opponents also went to court to protest the secrecy surrounding the drug. One was Hustler magazine publisher Larry Flynt, who was paralyzed after being shot by Franklin in 1978.

“I recently learned about the secrecy shrouding Missouri’s execution process,” the publisher stated in court papers prepared by the American Civil Liberties Union, which is representing him. “This includes recent revelations that Missouri appears to have used unsavory methods to secure and maintain execution drugs and tried to hide that and other information from the public.”

Tony Rothert, legal director of the ACLU-Missouri, which represents Flynt and other objectors, says the group is troubled by the secrecy surrounding compounded drugs. “Our concern here is about transparency and the government not hiding what it’s doing, especially when it comes to compounded drugs,” he says. “There are serious questions about whether using compounded drugs is going to be cruel and unusual punishment.”

Hours before Franklin’s Nov. 21 execution, U.S. District Judge Nanette Laughrey in Jefferson City ordered a stay, ruling that the state’s protocol “presents a substantial risk of inflicting unnecessary pain.” The 8th U.S. Circuit Court of Appeals at St. Louis vacated that order, and the Supreme Court refused to reinstate it. Other prisoners in Missouri, meanwhile, are continuing to challenge the state’s lethal injection methods.

The same issues are playing out throughout the country. Six states—Georgia, Missouri, Ohio, Pennsylvania, South Dakota and Texas—have either used pentobarbital from a compounding pharmacy or announced plans to do so, according to the Washington, D.C.-based Death Penalty Information Center. Of those, Missouri and South Dakota have carried out executions with compounded drugs. Colorado also made inquiries about compounded drugs, but executions in that state are on hold as long as the current governor remains in office.

Other states have revised their protocols and are no longer using pentobarbital. Florida incorporated the drug midazolam into its lethal injection cocktail in an execution carried out in October, and Ohio has said it plans to do the same.

At the same time, state officials often refuse to provide information about lethal injections. In Georgia, where 95 prisoners sit on death row, lawmakers recently passed the Lethal Injection Secrecy Act, which makes the identities of compounding pharmacies a state secret. Arkansas, South Dakota and Tennessee also recently passed bills aimed at prohibiting disclosure of execution procedures and the identity of people as well as companies involved in executions.

Those changes to the lethal injection protocols, combined with new confidentiality laws, have spurred a wave of litigation, with defendants and their lawyers arguing that the new methods of execution could result in a painful death.

“Any death penalty lawyer worth their salt would be challenging the method of execution in their particular state,” says Fordham University law professor Deborah Denno, who studies capital punishment.

But groups that support the death penalty say many of these challenges are meritless. “If you have pentobarbital, and if the supply you have has been tested and found to be in the right concentration, the challenges being raised should be dismissed,” says Kent Scheidegger, legal director of the Criminal Justice Legal Foundation, based in Sacramento, Calif. “There isn’t a good argument that the use of that method is in any way cruel.”

Scheidegger adds that state officials have good reason to keep the names of compounding centers a secret. “It is regrettably necessary to provide confidentiality for the sources, because of a conspiracy to try to choke off the supply by putting pressure on the suppliers,” he says. “Whatever it takes to defeat that conspiracy needs to be done.”

Denno says that challenges of lethal injections have accelerated since 2008, when the Supreme Court approved Kentucky’s three-drug protocol by a 7-2 vote in Baze v. Rees. Even though the Supreme Court upheld the state’s protocol in that case, the plurality opinion, written by Chief Justice John G. Roberts Jr., left room for new litigation. Roberts wrote that a method of execution could be unconstitutional if it creates a “substantial risk of serious harm,” and if there’s a feasible alternative.

Four other justices opined that Chief Justice Roberts’ opinion would likely result in a new wave of challenges to methods of execution. “When we granted certiorari in this case, I assumed that our decision would bring the debate about lethal injection as a method of execution to a close. It now seems clear that it will not,” Justice John Paul Stevens wrote in a concurrence.

The spate of recent cases has led to inconsistent rulings, says Richard Dieter, executive director of the Death Penalty Information Center. “In some states, concerns are brushed aside,” he notes, while “in other states, courts are giving this more scrutiny and delaying executions.”

For instance, Missouri recently executed Franklin with a compounded drug, but a Georgia execution has been delayed for at least one year while courts figure out whether state authorities can refuse to state where they intend to obtain pentobarbital.

In that case, state authorities had planned to execute Warren Lee Hill with compounded pentobarbital from a pharmacy whose name would be kept secret. But in July, Fulton County Judge Gail Tusan stayed Hill’s execution. “Here, neither the plaintiff, nor the general public, has sufficient information with which to measure the safety of the drug that would be used to execute plaintiff, as there is insufficient information regarding how it was compounded,” she wrote in her ruling.

Georgia’s highest court has agreed to hear the case, and it is expected to issue a decision this year. (Hill also has petitioned the Supreme Court to rule that he can’t be executed due to a mental disability. Hill, who killed another inmate while imprisoned for killing his girlfriend, has an IQ of 70.)

In Colorado state officials took the position that their lethal injection protocol—as well as the names of any supplying pharmacies—should be kept secret. State Judge R. Michael Mullins in Denver ruled in August that Colorado officials had to reveal their protocols, but not the names of suppliers.

“The public may have an interest in knowing who the pharmacies are,” Mullins wrote. But, he added, “releasing the information could possibly expose the pharmacy and its employee to ridicule, raise safety concerns and possibly have a negative impact on its business, which far outweighs the public need for the information.”

That ruling was issued in a case involving death row inmate Nathan Dunlap, who killed four Chuck E. Cheese’s employees in 1993. He was granted a reprieve in May by Gov. John Hickenlooper, but the stay will expire once Hickenlooper leaves office.

“If the state of Colorado is going to undertake the responsibility of executing a human being, the system must operate flawlessly,” Hickenlooper stated in his executive order granting the temporary reprieve. “Colorado’s system for capital punishment is not flawless.”

This article originally appeared in the March 2014 issue of the ABA Journal with this headline: “Compound Sentence: States keep mum on where lethal injection drugs are made.”