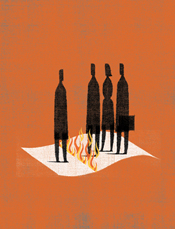 A contract is a contract. You breach, you lose. It’s as simple as that—whether the economy is in boom or bust. That’s what Edwards Angell Palmer & Dodge in New York City is arguing in a lawsuit brought by a terminated partner, Stephen Connoni. But resolving partners’ contractual disputes with their firms is rarely that cut and dried, some employment lawyers say.

However, Connoni alleges he was made an oral promise that any failure to meet the firm’s revenue expectations would result in a downward adjustment of his salary, not termination. He also claims he would have been able to bring in more revenue if not for the firm’s weak support, and that the firm breached its agreement to terminate him only by a 75 percent vote of the firm’s partners.

Connoni, Edwards Angell and their attorneys would not comment.

Law firms are dumping underperforming partners like stale bread. However, dumped partners may have ammunition that makes their cases stronger than you’d think.

“What were the promises made to the partner?” asks John F. Rossi, a solo plaintiffs employment lawyer in Boston. “Did the firm follow through on all the conditions in the contract for termination?”

Rossi adds that “sometimes, but not always, you can bring up issues that will help the partner’s case.”

In addition, judges hearing such cases may be put off by exposure of the sordid details of law firm financial fights. That may lead them to encourage firms to settle, says Philip L. Marcus, a solo lawyer who specializes in contract negotiation and intellectual property work in Columbia, Md.

“Judges who are faced with a partnership agreement that sets out rainmaking expectations are going to be somewhat hostile to those ex­pectations,” he says, “because selling isn’t traditionally part of the business of a lawyer.”

Still, law firms can generally fire partners without adjusting their ex­pectations to account for today’s economic downturn—as long as they abide by their partnership agreement and civil rights laws, says Elizabeth Hardy, a partner at Kienbaum Opperwall Hardy & Pelton in Birmingham, Mich., who has advised law firms on partner terminations.

“I don’t know of anything that would prohibit partnerships from say­ing, ‘If you can’t carry your weight, we can’t afford to carry you,’ ” Hardy says. “If someone’s asserting that partnerships must be lenient because we’re in a recession, my response is to look at what’s happening around the country.”