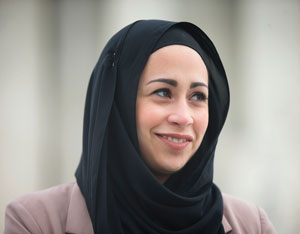 Justice Antonin Scalia spoke briefly off the cuff when he delivered the U.S. Supreme Court’s ruling in a case raising a claim of religious discrimination in employment.

“This is really easy,” Scalia said in announcing the 8-1 decision in Equal Employment Opportunity Commission v. Abercrombie & Fitch Stores Inc. “An employer may not make an applicant’s religious practice, confirmed or otherwise, a factor in employment decisions,” Scalia wrote for seven of the eight justices in the majority.

He made quick work of arguments by Abercrombie, the trendy clothing retailer, that it could not be liable under Title VII of the Civil Rights Act of 1964 for failing to accommodate a job applicant’s religious practice because the applicant did not provide notice of the need for an accommodation.

“We disagree,” Scalia said. “An applicant need only show that his need for an accommodation was a motivating factor in the employer’s decision.”

The decision was one of two high-profile defeats for business groups in a term in which they otherwise racked up a winning record at the high court. (The other defeat was the revival of a pregnancy discrimination claim in Young v. United Parcel Service Inc., which said that an employer must provide the same work accommodations to an employee with pregnancy-related limitations as to employees with similar limitations not related to pregnancy.)

“Abercrombie’s argument was just a shell game: We refused to hire her because she wore a headscarf and refused to ask for a religious accommodation,” says Douglas Laycock, a professor of law and religious studies at the University of Virginia, who helped write an amicus brief for religious groups in support of the EEOC and plaintiff Samantha Elauf.

The decision tells employers “they have to take the law seriously,” Laycock says.

Those who supported Abercrombie at the high court, and those who advise businesses on employment issues, express concerns about the decision.

“The test is whether the employer has enough information to make it aware that there exists a conflict between the individual’s religious belief or practice and a requirement for applying for or performing a job,” says an analysis by Fisher & Phillips, a multi-city firm that advises employers on labor and workplace law. “While the test itself may be straightforward, its implications on hiring are not.”

The case involves a religious-discrimination suit filed by Elauf, who had just graduated from high school in 2008 when she sought a job at an Abercrombie Kids store in a Tulsa, Oklahoma, mall.

Elauf, a Muslim, was wearing her headscarf when she interviewed for the job. She received generally high marks. But the store manager, who presumed Elauf wore the scarf for religious reasons, consulted a district manager, who said the headscarf would violate the chain’s “look policy.”

That policy barred hats and any other head coverings by store employees, and thus Elauf could not be hired, the district manager concluded. (The retailer has softened its policy since then and made it clear that Muslim headscarves are permissible.)

A federal district court granted summary judgment to the EEOC, which had taken up Elauf’s religious-bias case. After a trial over damages, a jury awarded her $20,000.

The 10th U.S. Circuit Court of Appeals at Denver threw out the suit, concluding that Title VII does not bar an employer from taking action against an applicant or employee based on a religious practice unless the employer received explicit, verbal notice of the religious conflict.

At oral arguments in February, Chief Justice John G. Roberts Jr. expressed some discomfort with an argument made on behalf of the EEOC that Title VII does not require an applicant to bring up the need for a religious accommodation, but that it should be revealed through a “back and forth” dialogue initiated by the employer.

Roberts worried that this would actually promote religious stereotypes by motivating a hiring manager to inquire of a bearded person of Middle Eastern descent whether he required an accommodation.

But during the same arguments, Justice Samuel A. Alito Jr. suggested a different scenario, which he said “is going to sound like a joke, but … it’s not.

“Let’s say four people show up for a job interview at Abercrombie,” Alito said. “So the first is a Sikh man wearing a turban, the second is a Hasidic man wearing a hat, the third is a Muslim woman wearing a hijab, the fourth is a Catholic nun in a habit.”

He wondered whether those applicants would have to tell the employer: “We’re dressed this way for a religious reason. We’re not just trying to make a fashion statement.”

Roberts ended up joining Scalia’s opinion, as did Justices Stephen G. Breyer, Ruth Bader Ginsburg, Elena Kagan, Anthony M. Kennedy and Sonia Sotomayor. Alito concurred in the judgment. He agreed that Elauf’s case should survive summary judgment, but that Abercrombie could still seek to prove that it could not have accommodated Elauf’s wearing the headscarf on the job without undue hardship.

Jenifer Wicks, the litigation director for the Council on American-Islamic Relations in Washington, D.C., says the decision “sends the message to Muslim women that practicing their religion is something that has to be accommodated by employers.”

CAIR made a point in its amicus brief in support of the EEOC and Elauf that job candidates often have no reason to suspect a need for a religious accommodation, especially those applicants who are recent immigrants or youths. A large portion of the Muslim population in the United States is made up of recent immigrants who are not familiar with employer practices and are less likely than employers to be able to predict the need for a religious accommodation for something like a headscarf.

“These can be uncomfortable conversations, but they are conversations that employers have to have to be able to comply with the law,” Wicks says.

By contrast, “the court’s holding places the onus on employers to speculate whether potentially religious dress or other religious practices are, in fact, religious practices requiring accommodation,” the Fisher & Phillips analysis adds. “Employers must now take second-hand information (or intuition) regarding applicant or employee religious observances and practices into account for fear of running afoul of Title VII.”

Walter Olson, a senior fellow at the Cato Institute’s Center for Constitutional Studies, wrote after the decision that Abercrombie had a particularly unfavorable case because of its awareness of Elauf’s headscarf, but “there just aren’t that many discrimination disputes that hinge on whether an employer has been explicitly told of someone’s religious beliefs.”

“Even if not many future cases fall into the Abercrombie pattern, employers are still at risk in at least two other ways,” adds Olson, whose institute filed an amicus brief on Abercrombie’s side.

“First, they will be tempted to ask explicitly whether some requested accommodation, such as weekend scheduling, is based on religious belief, and such questions will sometimes rouse a suspicion of religious discrimination—or perhaps even be an act of discrimination itself. Second,” Olson adds, “they will be encouraged to make assumptions about employees’ unvoiced religious preferences that will shade into stereotyping.”

In other words, just because the case before the justices was “really easy,” that doesn’t mean the next one will be.

This article originally appeared in the August 2015 issue of the ABA Journal with this headline: “Messing with the Dress: Abercrombie ruling marks a setback for businesses.”